Whenever I open a new cookbook, I grab a stack of sticky tabs and go wild, tagging every recipe I want to make. With all of the recipes tagged, there is usually one that stands out, that I know I want to make first. In the case of Giada's Feel Good Food by Giada De Laurentiis, it was the Vegetarian Chili Verde. I was first attracted to the veggies and bright flavors, but it was the uniqueness of the hominy, used in place of beans that sold me. 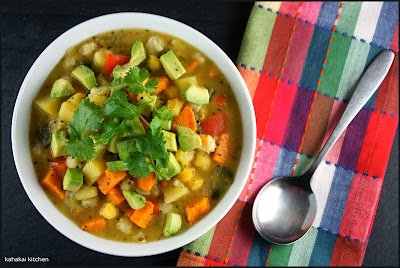 I made a few small changes--mainly adding a couple of extra veggies to clean out the fridge and more hominy. With the extra amounts I increased the amounts of broth and flour to ensure enough liquid. My changes are noted in red below. 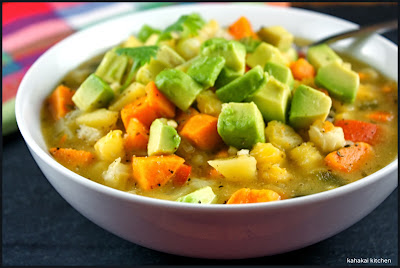 Giada says, "There are no beans in this recipe; instead it is loaded with lots of other goodies; Yukon Gold potatoes, sweet potatoes, and my new fave hominy, which is big bits of puffy corn. You can really sink your teeth into it, so you don't need the beans. This recipe is slightly spicy from mild green chile peppers and very bright from tomatillos."

In a large heavy pot or Dutch oven, heat the oil over medium heat. Add both of the poblanos, sweet potato, Yukon gold potato, onion, tomatillos and garlic. Cover and cook, stirring often, until the onion is tender, about 8 minutes. Mix in the flour, oregano, cumin, salt and pepper. Add the hominy with the juices and the broth and bring to a simmer. 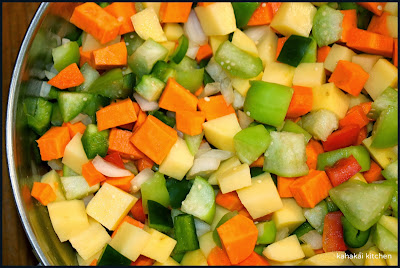 All the lovely colorful veggies that go into this chili verde

Spoon the diced green chiles into a food processor. Using tongs, transfer the 4 strips of poblano chile from the pot to the processor. Blend the chiles just until smooth. Scrape the chile sauce into the pot.

Cover and simmer the chili over low heat for 20 minutes. Uncover and simmer, stirring often, until the potatoes and yams are tender and the chili is thickened, 20 to 25 minutes longer. Season to taste with more salt and pepper, if desired.

Ladle the chili into bowls and serve, garnished as desired. 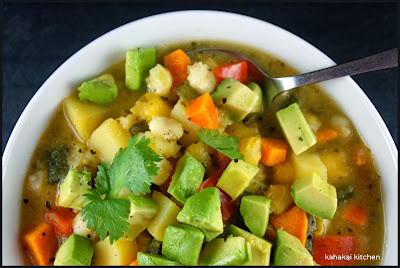 Notes/Results: Full of bright flavor, this is a satisfying bowl of non-traditional chili. It definitely has that California-Giada vibe to it. The tomatillos add a nice tangy touch and the oregano and cumin (I added a bit extra of my beloved cumin), along with the chile sauce give the broth good flavor. The heat is mild and warming and the the texture of the different veggies combined with the chewy hominy is a good contrast. I topped mine with avocado and cilantro but use whatever you like. Once all the veggies are peeled and chopped, it goes together pretty quickly and easily. One note on the salt--to reduce sodium and keep the chili from being to salty, I added a very small amount at the beginning and just a little bit more at the end. I also used low-sodium stock. By the time you add stock and the hominy liquid, you may not need to add much at all. A great veg-friendly dish with bright flavors that is satisfying without being heavy, I would make this chili again. 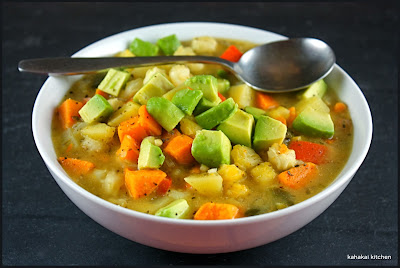 Besides Souper Sundays, this dish will be linked up at I Heart Cooking Clubs because tomorrow starts Potluck week--the chance to cook with any former IHCC chef! (It's always my favorite week of the month) ;-) Once the post goes live, you'll be able to see all the different chefs and recipes the participants chose to cook. 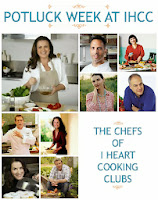 For now, let's check out the Souper Sundays kitchen where good friends and some lovely soups await!

Janet of The Taste Space joins us with this homey Thai Sweet Potato and Kabocha Squash Stew and says, "The sweet potatoes and Kabocha squash are roasted separately to bring out their sweetness and keep their shape. I don’t like green peas as much as Rob, but I really liked them here, next to the creamy roots. The red curry paste was not overwhelming, and really, I should have added more for Rob’s palate, but I played it safe so I could savour it, too. Instead of using a flour to thicken it up, I simply simmered it longer until it was a nice creamy coconutty consistency." 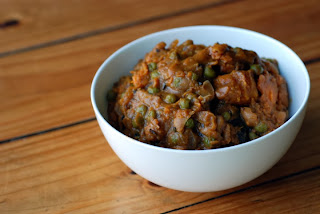 Pam of Sidewalk Shoes shares Donna Hay's Chicken Udon Soup and says, "We have had our first cold snap of the season and I have to say that even though my dishwasher is my most favorite thing in the whole world, the remote start on my car is a close second.  There is nothing nicer than to get in an already warmed-up-a-little car.  Cold weather also means the slow cooker has come out for the season. Slow cooker = soup most of the time in my house and this past week was no exception.  I wanted to try a Vietnamese Pho type soup and when I saw Donna Hay’s basic Asian stock in Issue #53 of her magazine, and I saw that it included cinnamon and star anise, I knew that was going to be simmering away in my slow cooker." 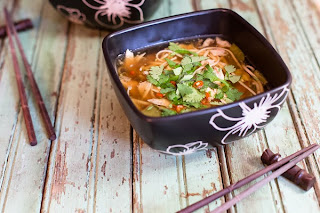 Brittany of Brittany Cooks made this pretty Roasted Tomato, Squash, and Coconut Milk Bisque and says, "Nothing beats a piping hot bowl of tomato soup with a grilled cheese sandwich on a cold, rainy (or snowy) day. Though I like tomato soup, I can usually only eat small bowls of the stuff, as it tends to upset my stomach. That is why I was so intrigued when I found this recipe. Using coconut milk makes it dairy free, and roasting the tomatoes and squash brings out their natural sweetness (even with out of season tomatoes!), making it at least seem less acidic. The addition of freshly graded ginger also adds a lovely twist. The result was a killer soup worthy of any grilled cheese sandwich." 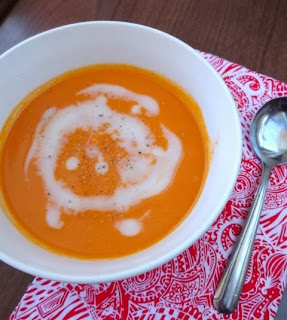 Mireille of Chef Mireille's Global Creations is back with Plantain Peanut Soup and says, "Peanut Soup has its roots in Africa. Wherever the slaves went - the Caribbean, South America, southern United States all have a form of peanut soup that is popular. This version comes from one of my favorite cookbooks, The African & Middle Eastern cookbook. I have made several things from this cookbook and it is one of my most utilized. I did make a few minor changes to the recipe in the book. The original recipe used white yams, but since I am allergic to white yam, I substituted green plantain and the recipe also did not include green beans, but since I had some that needed to be used I added it to the soup also". 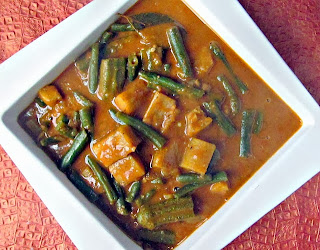 It's always a pleasure to have my friend Joanne of Eats Wells With Others in the Souper Sundays kitchen. This week she brings a creamy Pumpkin and White Bean Bisque with Sage Pesto and says, "This pumpkin white bean bisque is actually especially perfect for nerve-calming because it tastes like you’re slurping the creamiest thing EVER. When really, it’s all protein and fiber from the white beans. With a bright splash of herbalicious pesto on top. Can’t go wrong with that. And because soup pretty much requires some kind of bread to go with it, I whipped up a batch of these dill rolls from the latest issue of Bon Appetit." 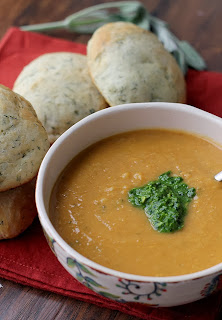 Thanks to everyone who joined in this week. If you have a soup, salad or sandwich that you would like to share, click on the Souper Sundays logo on my side bar for all of the details.