The Book Tour Stops Here: A Review of "This is Paradise" by Kristiana Kahakauwila with Opah (Fish) Tacos & a Tangy Yogurt Dressing

A good friend and co-worker took me to a hula performance at the gorgeous Hawaii Theatre shortly after I moved to Honolulu in 2001. Performed by a contemporary hālau (a hula group/school) out of San Francisco, the dances interpreted the story of Hawaii's history; primarily the impact of the missionaries coming to Hawaii in the 1800's and the overthrow of the Hawaiian monarchy in the late 1800's by American and European citizens. As I sat in the historic theater, moved by both the dance and the history itself, and feeling slightly set apart from the what felt like mostly local crowds, I was somewhat uncomfortable. Part of me wanted to spend the intermission apologizing to every native Hawaiian I could find for the past acts of those who came to the islands, even for moving my own haole (Caucasian) self to Honolulu for work and adding yet another mainland-transplanted body to the mix.

Living in Honolulu for just over 12 years now and spending five years making frequent business trips here before moving, I don't often feel isolated or excluded like I did that night. I have friends from all walks of life--locals who grew up "on the rock" and never left, those born here that went to school or lived on the mainland but eventually moved back, those not born here that have been here for much longer than I have, and those that more recently came to the islands on vacation and just never went back. For myself, I have found the islands and the people who call it home to be warm and welcoming overall and that when a genuine interest and respect is given to others, it comes back to me. I am lucky to live here but it isn't always pretty---racial tension, crime, death, violence, sadness, and poverty all do exist in paradise. Being a haole transplant who wasn't born here and didn't grow up on the islands, there are some locals who will look at me as an outsider and there are places I will never see, people I am unlikely to interact with and experiences that I will probably never have. "This is Paradise" by Kristiana Kahakauwila digs deep into the culture and gives the reader those rare glimpses of life in "real" Hawaii and not the rainbow-studded tropical paradise surface that people most often see in movies or on vacation. 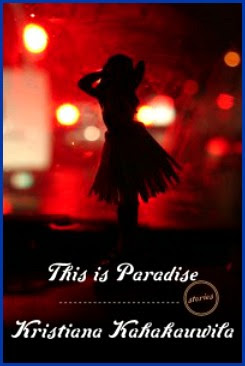 "This is Paradise" is comprised of of six short stories spread throughout the islands of Oahu, Maui, Kauai and the Big Island. In the title story, three groups of local women from different walks of life take turns observing and judging the behaviors of a young female tourist in Waikiki who learns that "paradise" has a darker side. "Wanle" looks at betrayal, revenge and the underground world of cock-fighting on Maui. "The Road to Hana" finds a young couple traveling in Maui and struggling with which of the two is more Hawaiian--the Caucasian male, Honolulu born and raised or the native Hawaiian female who was born and raised in Nevada. "Thirty-Nine Rules for Making a Hawaiian Funeral Into a Drinking Game" is the humorous but poignant observations of local family behaviors from a hapa haole ("Half white. Half foreign") female, born and raised in California but in Kauai for her grandmother's funeral. "Portrait of a Good Father" explores the effects of grief on the members of a Honolulu family (father, mother, father's mistress, daughter/sister) when their son/brother is killed in a hit and run. "The Old Paniolo Way' has an in-the-closet gay son returning to the Big Island to support his sister and be with his dying cowboy/rancher father while struggling with both his impending loss and the secrets he is keeping from his family.

These stories aren't "pretty" with happily ever-afters, they are raw and real, moving and full of angst, and strong emotions. Author Kahakauwila truly captures the essence of Hawaii--its beauty as well as its warts and brings it to life in colorful descriptions and language choice--lapsing into Hawaiian Pidgin, (the form of language or communication used in varying degrees by many Hawaii residents) when appropriate in the dialogue. I found myself laughing in parts, moved to tears in others and finding familiarity--I do know some of these people and have been to many of these places and events. This short story collection is a fabulous debut and I can't wait to see more from this author. The 240 pages are a quick and engaging read and would appeal to those who currently live or have lived or spent time in Hawaii, as well as those who want a peek at what life can really be like in paradise or those are interested in different cultures. 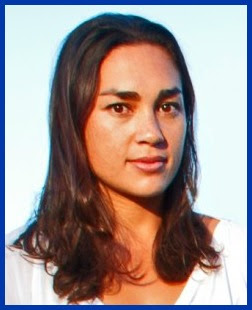 Author Notes: Kristiana Kahakauwila, a native Hawaiian, was raised in Southern California. She earned a master’s in fine arts from the University of Michigan and a bachelor’s degree in comparative literature from Princeton University. She has worked as a writer and editor for Wine Spectator, Cigar Aficionado, and Highlights for Children magazines and taught English at Chaminade University in Honolulu. She is an assistant professor of creative writing at Western Washington University.

If you read this blog regularly, you know that I usually cook a dish inspired by the books I read and review. 'This is Paradise"--much like Hawaii itself, has snippets of all different kinds of food woven into it. Foods like Kona coffee, mac nuts, burgers, fried eggs with shoyu, freshwater shrimp grilled over a campfire, peanut butter and guava jelly sandwiches, sweet potato manju, chocolate mochi, kahlua pig and laulau, sashimi, chicken long rice, mango wedding cake, mai tais, spam musabi, loco moco, shave ice, pickled radishes and beef curry with rice--plenty of inspiration. In the end, with a busy week and a house full of visiting family (My sister Linda, nephew Sean, niece Kayla and her boyfriend David), I chose none of that and instead made fish tacos with Hawaiian opah (moonfish). Not a local dish but an easy dish of blended ingredients--local fish and veggies with a little Baja influence. ;-)

A family dinner, enjoyed outside on the lanai--just a quick picture  of my plate before digging in. Simple and good. Since I am pretty sure most everyone can make a fish taco, I am just posting the recipe for the Tangy Yogurt Sauce that I tossed together. Mostly because it turned out well and my sister wanted me to write down the recipe. 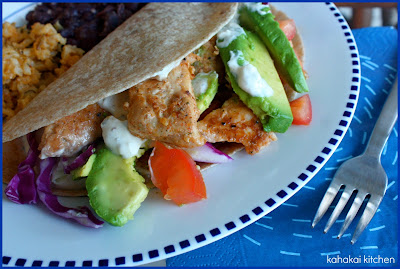 Whisk together yogurt and mayo until well combined. Whisk in minced garlic, cumin, coriander, oregano, dill, chili powder and cilantro. Add lime juice and salt and pepper to taste. Cover and place in refrigerator for 1-2 hours before serving.

Notes/Results: Just an easy sauce with lots of cumin and lime. I keep mine on the cool and refreshing side and serve salsa for the heat. Thin it out a bit with a little milk and it makes a good creamy dressing for a salad.

Note: Review copies of "This is Paradise" were provided by the publisher and TLC Book Tours. I was not compensated for this review and as always my thoughts and opinions are my own