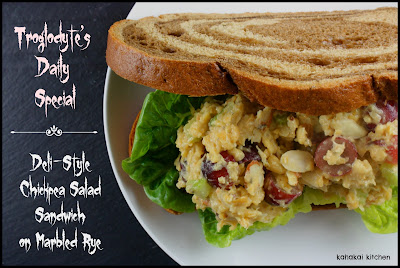 May's pick for the monthly blogging event Food 'n Flix is an odd little movie. Delicatessen is a French film--a mixture of dark comedy and French farce. Yes, there is food--just not much that you would want to eat. The movie is set in post-apocalyptic France, in a dingy, rundown apartment building filled with very quirky tenants and run by Clapet, a butcher who has a unique way of getting meat to sell to his customers. Food is scarce, grain is used for currency, and Clapet keeps a steady stream of meat and income coming in by advertising for building handymen who he then murders and butchers, selling the meat. Former circus clown Louison, answers the ad and although he is an excellent and entertaining worker, popular with the tenants and Clapet's daughter Julie, he is next on the list to kill. Julie falls in love with Louison and would rather he come to dinner than be dinner, so she contacts a group of sewer-dwelling Troglodistes or troglodytes (vegetarian French rebels), to save him and of course, much mayhem ensues. 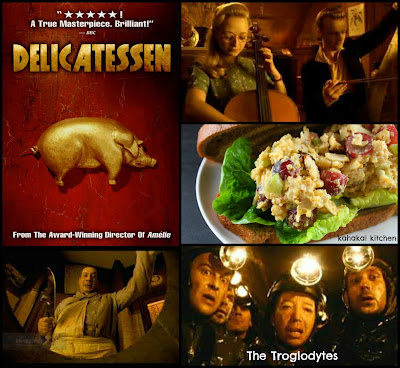 I had heard of the film, (directed by Jean-Pierre Jeunet--who also directed of one of my favorite foreign films Amélie) but had never watched it, and was I intrigued when our host (Elizabeth of The Law Student's Cookbook) selected it. The film is in French with subtitles, which I find a bit challenging to focus on at home. Sadly, I tend to rarely just sit and watch a movie without multi-tasking by reading, reviewing cookbooks, sorting through magazines, folding laundry or other like tasks. This meant that I probably missed a good chunk of detail out of the middle of the film but what I saw I liked. It's both silly and dark (we are talking cannibalism here although most of the "gore" is not really shown) and overall, a fun pick.

So, what dish to make inspired by this wacky film?  I knew I wanted to do something vegan to honor the passionate yet bumbling troglodytes. The word delicatessen in English means "delicacies" or "fine foods" and it became a place where these foods were sold. Delicatessen took me to it's shortened American form of delis, and I started thinking about my favorite delis and deli-style sandwiches. Back when I lived in Oregon (and in my meat-eating days), there was deli in N.W. Portland (can't remember the name and it's closed now), that was one of my favorites. They had both excellent corned beef and chicken salad and, most importantly, you could order a sandwich with two protein choice and so I would get a chicken salad/corned beef combo. It came not a half of each kind, but a massive sandwich all layered together. It might sound weird but it was delicious--don't knock it until you try it. ;-) 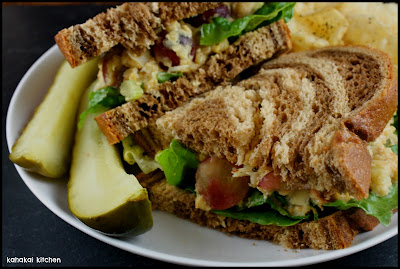 I decided to forgo a vegan corned beef attempt and to make a mock deli-style chicken salad sandwich using chickpeas. The wonder of the Internet is that when I typed in "deli-style chickpea salad sandwich" to get some ideas, a recipe from Vegetarian Times popped right up and after reading through it, I knew this was the sandwich I wanted to make. The recipe comes from Great Gluten-Free Vegan Eats by Allyson Kramer.

*Deb's Note: I cooked my chickpeas in water, flavored with "no-chicken" soup base, then drained and cooled before mixing up salad. I think it gave them just enough chicken-ish flavor

Pulse cooked chickpeas, sage,  chicken-flavored vegetable seasoning (if using) and salt in a food processor until just crumbly. (Note: The size of the chickpea chunks will determine the texture of the salad--for a smoother salad, pulse longer) 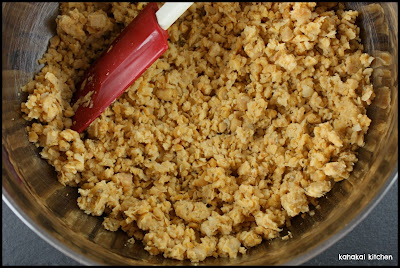 Transfer to a bowl and stir in celery, lemon juice, vegan mayo, brown mustard, agave and celery salt until combined. Fold in almonds and grapes and season to taste with salt and black pepper if desired. 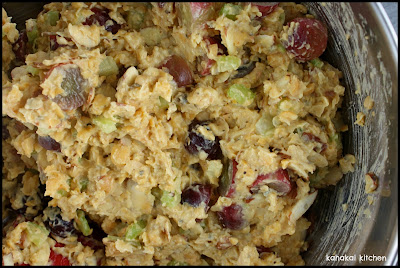 Serve with (gluten-free if desired) bread for a sandwich, or on top of lettuce. (I used a nice bakery marbled rye bread for a deli feel.) 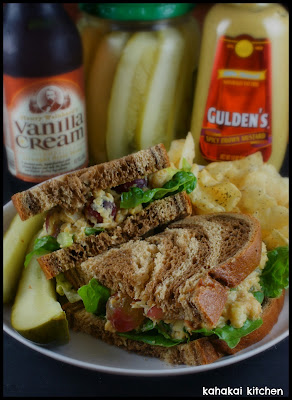 To Serve Deli-Style: Much like *needing* ginger ale on airplanes, I *must* drink cream soda at a deli. The Henry Weinhard's Vanilla Cream shown in the background is perfect--sweet and delicious. (Who knew that man knew more than beer?!)

So ticking off my perfect deli-sammie serving checklist:
Got it all! I was even loud, abrupt and kinda rude to myself while I was serving it--it was like I was transported right into a typical deli, but without all the saturated fat and cholesterol! ;-) 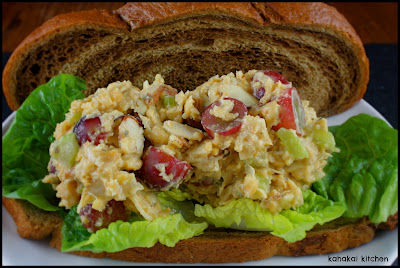 Notes/Results: This sandwich is pretty amazing. It may not look exactly like a chicken salad sandwich but, served on rye with lettuce, the taste and texture are fairly spot-on. In fact, if I were to lock you in a dark room, tell you it was a chicken-salad sandwich and feed it to you--I think you would believe me. (Please don't be alarmed, I have no intention of locking you in a dark room and feeding you this sandwich--that would be plain old creepy. Although it does kind of fit with the movie.)

Anyway... this chickpea salad is easy to make and tastes good whether between two slices of bread, topping a salad or just scooped out of the container. I have a feeling I will be making it again and again. I think the troglodytes would approve!

Thanks to Elizabeth for picking a movie that I might not have gotten around to watching on my own. The deadline for this edition of Food 'n Flix is tomorrow, May 29th and Elizabeth will be rounding up the entries at The Law Student's Cookbook shortly after. If you missed this round and are a fan of food, film and foodie films, consider joining in for June. We will be watching the documentary Jiro Dreams of Sushi hosted at Culinary Adventures with Camilla.