I will never hear the name Mulligatawny Soup without thinking of the Seinfeld episode with the "Soup Nazi."  This heavily-spiced soup is a favorite of mine in all of its many forms. In this case a took a Madhur Jaffrey recipe and made it a vegan version--swapping out the chicken and replacing it with potato, carrot, celery and peas. (My changes are in red below.) It gets its thickness from the red lentils, making it a healthy and full-of-flavor bowl of soup. 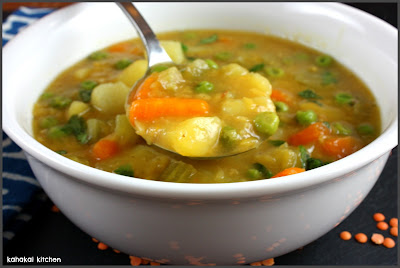 Jaffrey says, "A wonderful Anglo-Indian soup, this may be served as a first course or as a light lunch. Stir the soup well before serving as all dal soups tend to separate slightly." 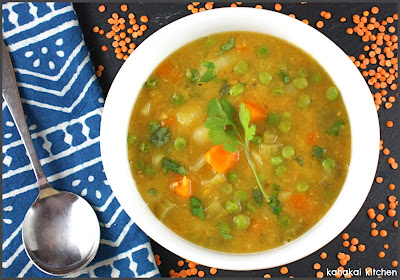 Add the split lentils, broth and salt and bring to the boil. Partly cover the pan, reduce the heat to low and simmer for 45 minutes or until the lentils are very soft. (I added the peas after 30 minutes.)

Add the lemon juice and fresh coriander and stir to mix in well. 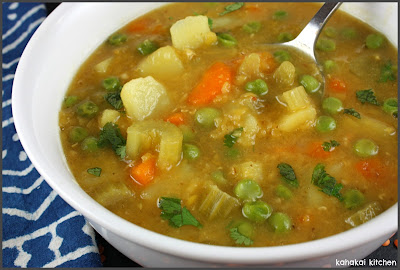 Notes/Results: Thick and loaded with exotic spice flavor, this is a great bowl of soup. I left mine on the mild side as I was feeding my mom who doesn't like things too spicy and added a little extra lemon. She loved it--really enjoying all of the flavor and the chunks of potato, not missing the chicken at all. ;-) Satisfying and warming, I would make this again. 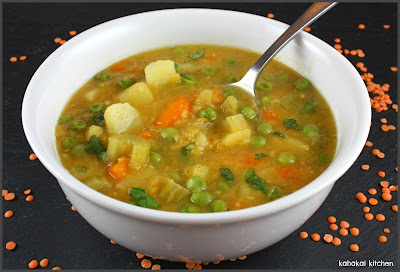 This soup is also my entry for I Heart Cooking Clubs where we are featuring "Meat-Free But Flavorful" dishes this week.

Soups, a salad and a sandwich are waiting in the Souper Sundays kitchen--let's take a look.

Simona of briciole is here with a hearty Caldo-Verde-Inspired Soup (Zuppa Stile Caldo Verde). She says, "With a name as sensuous as caldo verde (literally, green broth), a soup's future is secure. Who doesn't want to eat some caldo verde? I certainly wanted to, but there was a little glitch: I don't eat sausages, I stopped eating them years ago, for various reasons. I have nothing against chouriço or linguiça, which are called for in the recipe for caldo verde, a traditional Portuguese soup, often referred to as Portuguese kale soup. And I don't like to eat "imitation" something, so I set about making a soup "inspired by" caldo verde, without sausages." 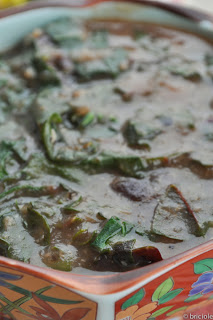 Pam of Sidewalk Shoes is as fond as soup toppings as I am, evidenced by this Borlotti Minestrone with Arugula Pesto. Pam says, "Every time I make a soup that has some sort of garnish, I swear that I will never make an un-garnished soup again.  Then you get months and months of plain soup, until I stumble upon another garnished soup and the process begins again. I am never making an un-garnished soup again. ... I immediately found Borlotti Minestrone with Arugula Pesto.  I was a smidgen doubtful because it had no meat – not even the ubiquitous ham bone.  But what it did have was arugula pesto.  I love pesto in any way, all ways, all the time.  So swallowing my doubts (and spoonfuls of arugula pesto) I made it."

Ana of Sweet Almond Tree shares a carb-lover's Pasta, Potato and Onion Soup this week and says, "This is a really, really good soup.  Thick, so tasty, and creamy, but without dairy.  Rosemary and parsley add green flavors and give the soup a light green color. Vegetable and chicken broth add another dimension of flavors, making the soup irresistible.  You just want another and yet another bowl.  You want to enjoy those potatoes and pasta mixed in the delicious thick broth.  Carb heaven!" 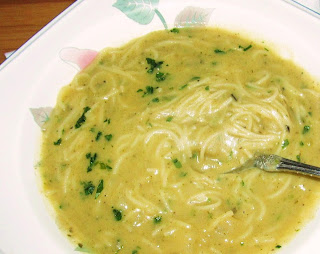 Joanne of Eats Well With Others brings Smoky Chipotle Vegetarian Chili and says, "So what is so special about this chili, you ask?  I can't quite put my finger on it. Maybe it's the beans. Or the excessive(ly awesome) amount of veggies. Or the smoky heat from three different kinds of chiles and a heck of a lot of cumin. Who knows. I don't think it's the kind of thing you can explain, or would want to even if you could. All I can say is - make it. Pair it with this beer bread, which is fabulous on so many levels. And if it's right...you'll know." 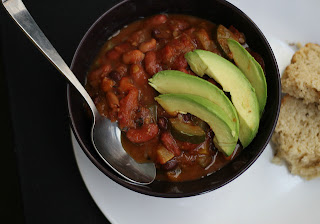 Janet of The Taste Space has a salad to share, this Turkish Freekeh Pilaf with Chickpeas and Wild Greens. Janet says, "This dish had such promise. I used freekeh, which is young cracked wheat with beautiful smoky undertones, and chickpeas and spiced it with paprika, cumin and pomegranate molasses. Thyme and lemon, too. Sounds beautiful but thwarted by the bitter greens. The original recipe called for ground lamb (which I obviously omitted) but I doubt that would overcome its bitterness. Next time, I’d suggest using a milder green like Swiss chard or kale. Although, the leftovers were not as vile.. either that, or I slowly became accustomed to it." 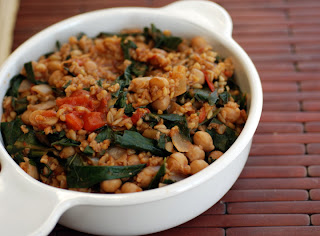 Finally, one sandwich from Tigerfish at Teczcape - An Escape to Food, these No-Cook Sardines with Apples Open-face Sandwiches. Janet says, "There were suggestions about making no-cook sardines when I cooked sardines in this spicy tomato-onion sauce. Thank you so much for the reminder! Absolutely love the no-cook part of it and of course, the spice and flavors that it brings. ... I also made some open-face sandwiches with this sardine pâté and enjoyed it very much with thinly sliced "matchsticks" apples which cuts through the otherwise savory pungent strong sardines taste and smell." 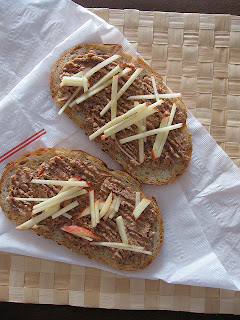 Thanks to everyone who joined in this week. If you have a soup, salad or sandwich that you would like to share, just click on the Souper Sundays logo on my sidebar for all of the details.