A Discovery of Witches--Giveaway!--Win a Copy of a Wonderful Winter Book Escape

I'm a bad, bad food blogger. There hasn't been a whole lot of posting going on here at Kahakai Kitchen. Or a whole lot of cooking, or photo taking, or other bloggerly pursuits. I have eaten some great food, even cooked a little here and there for various holiday events but I haven't bothered with pictures or writing down recipes and such. In fact, it's been little difficult coming out from under the blankets when I have not been working. Yep, Max and I find blankets hard to resist and take every advantage to pull one out when the weather turns a little cooler. It has been very windy, somewhat rainy, cool, and about the closest it gets to blanket weather here the last couple of weeks.
Blanket weather calls for a cup of tea and a big, thick sumptuous book to curl up and escape from the holiday hustle and bustle. The book keeping me company right now is the fantasy novel A Discovery of Witches by Deborah Harkness. I am in the thick of reading it right now and I am coming out from under the blankets to let you know that you have an opportunity to win a copy of the newly-released paperback version for yourself. 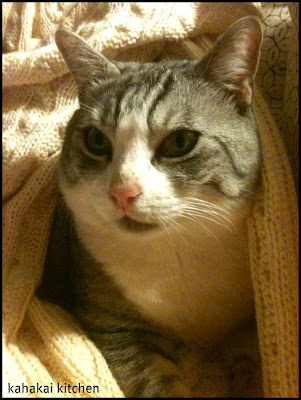 A Discovery of Witches is the tale of Diana Bishop, an Oxford scholar and historian and also a witch--a direct descendant of the first woman executed in the Salem Witch Trials in fact. Diana doesn't do much magic, wanting to be normal and to advance in her academic career on her own merits. When she accidentally uncovers an enchanted manuscript hidden away inside an old alchemy book called Ashmole 782 in the at Oxford's Bodleian Library, Diana quickly returns the book to the stacks but suddenly there are an excess of witches, daemons and vampires coming out of the woodwork and willing to do anything to get their hands on the book which has been missing for hundreds of years and purportedly holds the secrets to their origins. Diana finds herself at first frightened by and then attracted to a particular mysterious vampire, Matthew Clairmont, who wants the book for his genetics research and wants Diana too, even though witches and vampires rarely mix and have prejudices against each other (and daemons and humans too of course).
The book is an absorbing combination of mystery, suspense, romance and magic, with about 1,500 years of world history worked in its nearly 600 pages. I like that it is a smart book, that these are adult characters, and it isn't the typical story of an awkward teen-age mortal girl in love with a vampire. Diana is an intelligent, history-loving, rowing enthusiast who just happens to be a witch, and Matthew is a smart, yoga practicing, wine connoisseur scientist who just happens to be a vampire. I will confess that I am only about a third of the way through the book so far but I am completely caught up in the story and it is very hard to put down. 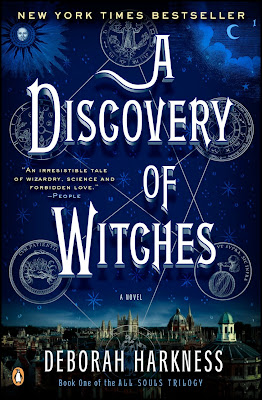 A Discovery of Witches was just published in paperback from Penguin Books on December 27th. The book debuted at # 2 on the New York Times bestseller list and became an international phenomenon with major publications in 34 countries and over 300,000 copies sold. Warner Brothers recently acquired screen rights to the book and its sequels and the second installment in the All Souls Trilogy, Shadow of Night, due out in summer 2012. The new paperback cover of A Discovery of Witches is gorgeous—the spine art of Oxford from the original edition is featured on the cover. You can read more about the book and author Deborah Harkness, here on her site.

***A Discovery of Witches Giveaway***
The publisher was kind enough to send me a copy of this luscious book and is letting me give away a copy to a lucky reader looking to escape the winter doldrums.
If you would like to win a copy for yourself it's very simple: just leave me a comment on this post, sharing what your favorite book that you read in 2011 is by 11:45 PM (Hawaii time) on Tuesday, January 3rd. I'll randomly draw a name and announce it the following day and the publisher will send out the copy soon after.
Good Luck! I'm off to read the next chapter. ;-)
Disclosure Statement: A review and a giveaway copy of this book were provided by the publisher but I received no monetary compensation and as always my thoughts and opinions are my own.