Tortilla Soup is comfort food, Both the soup itself--thick, flavorful and delicious, and the movie "Tortilla Soup"--a little comfort food film and one of my favorite foodie movies. Since it's Movie Night over at I Heart Cooking Clubs, a bowl of Mark Bittman's Tortilla Soup along with a serving of the movie seemed like the perfect choice. 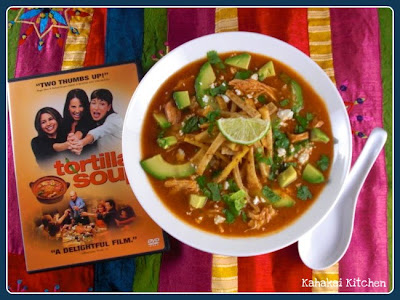 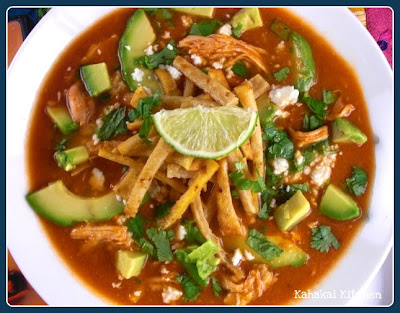 For the Tortilla Soup itself, I chose Bittman's recipe from "The Best Recipes in the World" (found on pages 143-144).
Bittman says, "This classic Mexican soup is the perfect solution for leftovers--stale tortillas, cold chicken, and overly ripe tomatoes. It can be garnished with a variety of toppings, from the classic avocado and cheese to steamed greens." 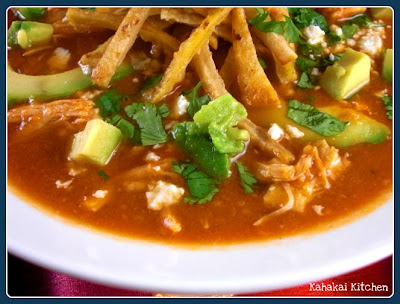 Tortilla Soup (Sopa de Tortilla)
"The Best Recipes in the World" by Mark Bittman
(Makes 4 Servings)
Time: 1 Hour
1/2 cup corn, grapeseed, or other neutral oil
6 corn tortillas (stale are fine), cut into 1/4-inch strips
3 garlic cloves, sliced
1 large onion, diced
2 dried chilies, preferably pasilla, stemmed, seeded and sliced
3 fresh tomatoes, roasted or blanched and peeled, or canned tomatoes
6 cups chicken or vegetable stock, preferably homemade
1 cup shredded cooked chicken
2 Tbsp fresh lime juice, or to taste
salt and black pepper to taste
1 cup chopped fresh cilantro leaves
1 cup cubed Mexican fresh cheese, such as queso fresco, blanco or ranchero, or Monterey Jack cheese
1 ripe avocado, peeled, pitted, and sliced
Put the oil in a saucepan over medium-high heat; a couple of minutes later, when the oil is hot, begin to fry the tortilla strips in batches until golden brown and crisp, turning after a minute or two, for a total of 2 to 4 minutes. Drain on paper towels and set aside.
Discard all but 2 tablespoons of the oil. Turn the heat to medium, add the garlic and onion, and cook, stirring occasionally, until softened, about 5 minutes. Add the chilies, tomatoes, and half the tortilla strips and cook for another 5 minutes. Pour in the chicken stock and bring the mixture to a boil, then simmer for 20 minutes. (You can prepare the soup up to this point and let it sit for a few hours or cover and refrigerate for up to a day before proceeding).
Cool slightly. Using an immersion blender or an upright blender (be careful to prevent spattering), puree the mixture until smooth. Return to the stove over medium heat, stir in the chicken, and heat through. Season with the lime juice, salt, and pepper. Garnish with the cilantro, cheese, avocado, and remaining tortilla strips and serve. 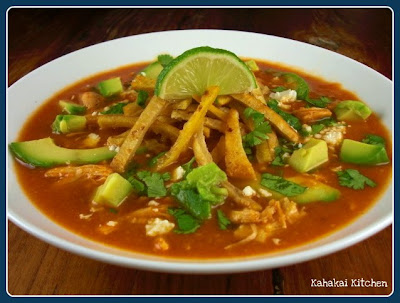 Notes/Results: Mmm...delicious! Complete comfort food, wonderful thick texture and great flavor. Is it "the best in the world"--I am not the authority on tortilla soups, but it tasted pretty darn good to me. ;-) I made the soup pretty much to the recipe, using boxed Pomi tomatoes, my homemade chicken stock, and using a smoked rotisserie chicken from Whole Foods for the meat. I think the chicken added some extra smokiness to the soup that was really tasty. To top it, I chose my favorite Mexican cheese, cotija, crumbled on top, along with the avocado, cilantro and tortilla strips. Just a big bowl of soupy goodness that I have been enjoying all weekend, including my favorite bowl, consumed curled up on the touch, "Tortilla Soup" in the DVD player. According to my DVD box, Ebert & Roeper gave the movie "Two Thumbs Up!" and I give Bittman's tortilla soup two enthusiastic thumbs up too. 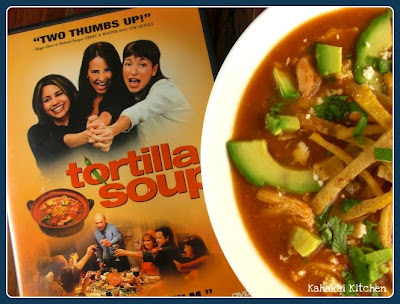 You can check out what the other IHCC participants made for their Movie Nights by going to the website (here) and following the links.

In addition to IHCC and Souper Sundays, I am sending my tortilla soup over to girlichef and her great quest to find the best tortilla soup out there. If you have a favorite tortilla soup, head to her blog and this post for all of the details.

Let's see who is in the Souper Sunday kitchen this week and see what they brought with them:
Reeni from Cinnamon, Spice & Everything Nice is here with one of my favorite classic soups. Reeni says, "I have a hearty soup recipe today for Italian Wedding Soup. The name refers to the meat and vegetables marrying well together. Minestra Maritata means married soup. And it truly is a harmony of flavors with tasty, tender, little meatballs swimming in an herby broth with tubettini pasta, spinach, carrots, onion and garlic. It is the sort of soup you wish was served in a bottomless bowl..." 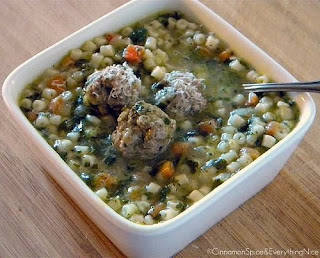 Zibi from Fresh Slowcooking made a seasonal Hint O'Mint Pea Soup this week. She says, "What would happen if I combined asparagus, mint and another spring vegetable like peas? A satisfying, pea soup with a refreshing hint of mint. If you like peas you will really enjoy this soup. The peas overpower the asparagus flavour, which is good or bad depending on how you feel about asparagus, but the asparagus still contributes to the texture and nutrients packed into this soup." 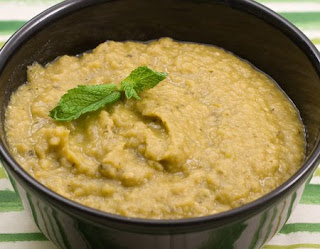 It's so nice to have Graziana from Erbe in Cucina back with us this week and with this lovely Meat and Vegetables Ragout with Thyme. She says, "Every winter my thyme die, so last summer I bought wild thyme instead of regular thyme. It's an harder plant, and now is alive and full of green fresh leaves. I used the wild thyme for this ragout: you can use it as a pasta seasoning, or as a delicious soup, served with rustic bread slices." 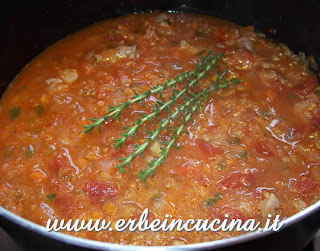 Kim from Stirring the Pot, has both a soup and sandwich this week. For her soup, she says, "Still obsessed with my copy of Home Cooking with Trisha Yearwood, I made Trisha's Chicken Soup. The picture in the book was so beautiful and I was convinced that I needed to make it as soon as possible. I have tried five of her recipes so far, and I like this recipe for her Chicken Soup the best. It was delicious, outstanding, creamy, hearty, and quite addictive. My husband and I each had two bowls, in one setting." 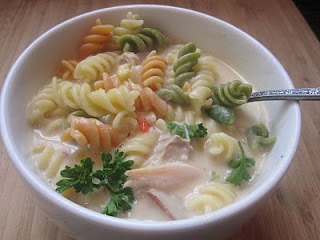 Great minds do think alike! ;-) It turns out that my friend girichef is also a fan of Tortilla Soup--the movie and the food and branched out from her beloved go-to recipe to try Mark Bittman's Tortilla Soup from his "How to Cook Everything Vegetarian." She says, "It was good. It was really good. I'm woman enough to admit it. But, I'm not gonna go so far as to say it was better than my favorite. But I would make it again. And eat it. With a smile on my face." 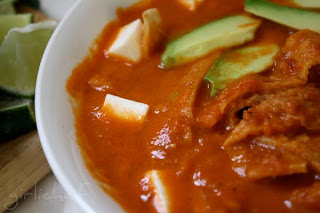 Nithu from Nithu's Kitchen is back with a Cold Mint and Cucumber Soup that she promises is sure to beat the summer heat. Nithu says, "This green coloured cold soup is very simple to prepare.This is such a refreshing starter for summer and can be prepared a day early and refrigerated to improve the flavour. You can garnish the soup with mint and cucumber pieces just before serving." 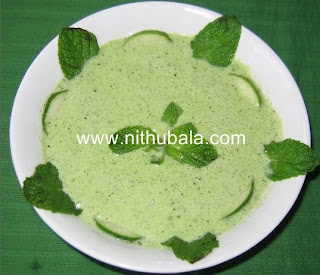 Christine from Kit's Chow is celebrating the Spot Prawn Festival in Vancouver with this luscious Spot Prawn Salad with Allioli recipe. She says, "Get a couple of pounds of spot prawns, some wine or beer, make a salad and you'll have yourself a feast. Mr. KC likes to peel and eat the prawns, one at a time. I like to peel the prawns, arrange them on my plate, suck on the heads, wash my face and hands and then eat the prawn salad with a fork." 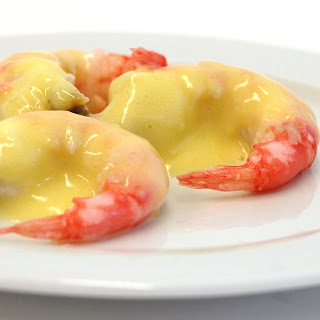 For her sandwich entry Kim from Stirring the Pot says, "In the mood for both soup and sandwiches this week, I also made Pioneer Woman's Grilled Chicken Sandwich with Apricot Sauce. A creamy sauce is made from equal parts apricot preserves, mayo and Dijon mustard. You begin by spreading the sauce on two slices of good sourdough bread. Layer spinach and sliced red onions on one slice of bread and the grilled chicken breast on the other side. I think you could definitely stop here and eat this sandwich cold, but Ree grilled hers and so did I." 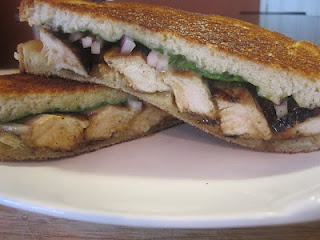 Natashya at Living in the Kitchen with Puppies made fresh tortillas this week and says, "They were perfect for making Mexi-Style Sammies for my son. He loves what he calls a Breakfast Burrito - I make seasoned ground beef, folded into a tortilla with cheddar cheese, diced tomatoes and a sunny side up egg on top. Yum! Put the meat on a tortilla, add your cheese, tomatoes and a beautifully cooked egg and you have a delicious treat of a weekend breakfast sammie." 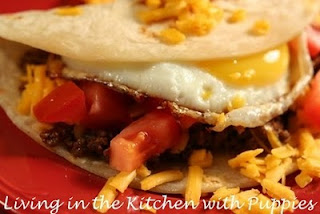 A gorgeous bunch of recipes this week and a little something for everyone. Thanks to all who joined in. If you have a soup, salad or sandwich that you would like to share, click on the Souper Sunday logo on the side bar for all of the details.

Have a great week!