Sometimes the body needs a very simple soup, something to nourish and replenish it after a long week. This Ginger-Lemongrass Miso Soup from "The Candle Cafe Cookbook" by Joy Pierson and Bart Potenza is a perfect solution. Candle Cafe is a famous vegan restaurant in New York and a friend gave me the cookbook a few years ago. I pulled it out the other day and was reminded how many simple and delicious recipes it contains. There are lot of wonderful sounding soup recipes in the book but since I had white miso, lemongrass and some enoki mushrooms to use up, and was craving something very simple and basic, I chose this one. 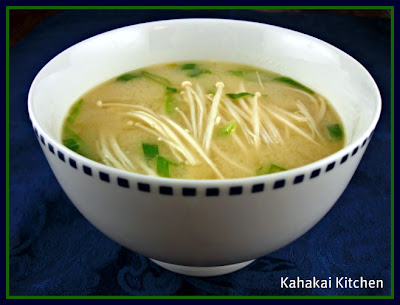 "The Candle Cafe Cookbook" says, "Lemongrass, an essential ingredient in Thai cooking, adds a wonderful, refreshing flavor to soup, especially when combined with miso and ginger. Serve this delicious and revitalizing soup with a salad and simply cooked grains."
Ginger-Lemongrass Miso Soup
"The Candle Cafe Cookbook" by Joy Pierson & Bart Potenza
(Serves 6-8)
1 lemongrass stalk, trimmed, peeled, and thinly sliced
1 tsp sesame oil
1 medium yellow onion, peeled, halved, and thinly sliced
2 Tbsp minced fresh ginger
3/4 cup white miso
1 cup enoki mushrooms, for garnish
1 cup thinly sliced scallions (green part only), for garnish
In a stockpot, bring 8 cups of water and the lemongrass to a boil and simmer for 15 minutes; discard the lemongrass and strain, reserving the water. Heat the oil in a saute pan and cook the onion and ginger until the onion is translucent, about 10 minutes. Transfer to a soup pot and add the reserved water. Bring to a boil, reduce the heat, and simmer, uncovered, for 5 minutes. Turn off the heat and stir in the miso. Ladle the soup into bowls, garnish with the enoki mushrooms and scallions, and serve immediately. 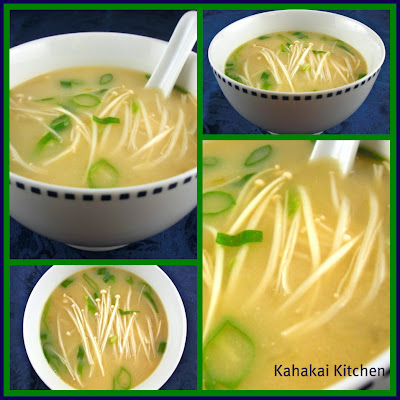 Notes/Results: Light and easy and nicely flavored, this is a great simple soup for when your mind, body and soul are craving simplicity. It is good on its own--the lemongrass (I doubled the amount) and ginger go well with the miso, but it would also be a great starting point for other ingredients. Cubes of tofu, seaweed, greens, carrot or daikon batons or corn would all be excellent additions. For me, I made a half batch and ate a big bowl feeling comforted and a bit renewed. I would make this again.

Now lets see who is in the Souper Sunday kitchen this week:
Christine from Kits Chow made this spicy Korean Kimchi Stew. She says, "Jjigae are Korean stews that are usually cooked at the table and Kimchi-jjigae is one of the dishes that home cooks make when their kimchi is getting very pungent. There is a big interest in Korean cooking and Kimchi has become international food like sushi. There is no need to make your own. Just buy a jar and try this dish. It is so easy to make and you can put whatever you like in it, eg beef or seafood instead of pork, other kinds of vegetables or top it with an egg. You control the amount of ingredients and the spiciness." 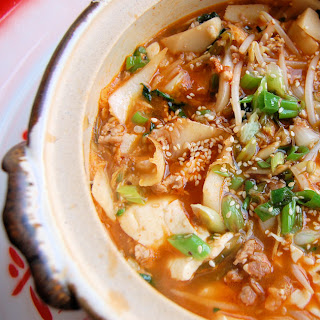 Sometimes the best soups are the ones we just throw together like this Chipotle Black Bean Soup from Foodycat. She says, "When I ordered the chillies for my Mexican Chorizo, I bought a couple of other things as well. A jar of chopped chipotle in adobo, for example. I've seen so many recipes that call for it, but I've never seen it in a supermarket, so I thought I should snap some up. Of course, when push came to shove, I couldn't remember any of the enticing recipes that called for it! But I really wanted to use it, so I threw together this very quick soup.It takes no time at all, but still tastes really good." 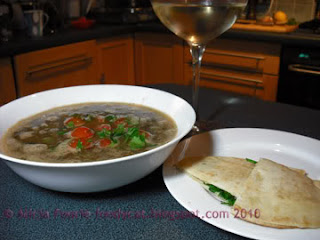 Please join me in welcoming Spencer from Live2EatEat2Live Blog. Spencer, (otherwise known as "The Mouse Who Eats" along with partner "The Cat"), is a new blogger, just getting started so be sure to go by and say hello. This week Spencer made a Seaweed Mushroom Soup with Jiu Zao. Spencer says, "As I was browsing the web, I came across a blog about sake lees. Sake lees (or kasu) are the solids after sake has been filtered. ...sake lees contain yeast and essential amino acids that are good for you. The Cat was familiar with sake kasu. She calls it jiu zao, literally, alcohol residual. She’s had it in braised meat dishes and in sauces over meat and fish dishes. ...The soup was not very photogenic, but The Cat gave a thumbs up. And in the end, that’s all that matters." 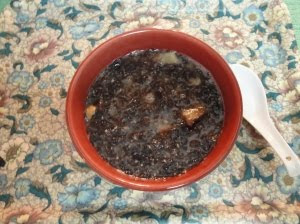 Another new face for Souper Sundays is Shirley from Enriching Your Kid!, a blogger who focuses on creating healthy and enticing meals for her family. An example is the kid-pleasing Alphabet Soup she made this week. Shirley says, "I have not been able to blog of late, no thanks to the summer viral flu in the air. The kids took turns with it. But it gets even better now! Joel's got summer vacations, begining tomorrow. So I would be busy thinking of ways to keep my busy bodies busy. Hmm I would have to think of a few strategies here. So here's some Alphabet Soup to herald the summer vacations! Simple to make easy to fascinate kids. Now how many letters and numbers can you spot?" Welcome Shirley! 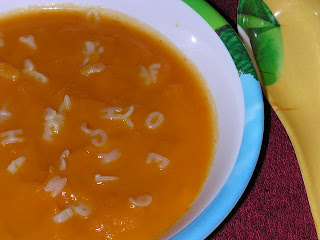 My friend Reeni from Cinnamon Spice & Everything Nice is here with a hearty bowl of goodness. She says, "I have a spicy soup recipe today for Chipotle Corn & Potato Chowder. It's a simple but satisfying soup brimming with pieces of potato and corn. The chipotle pepper gives it a lingering heat that adds a nicely robust flavor without overwhelming you. It's thick, creamy and a little bit sweet from the cream-style corn. Half-way through some of the potatoes are removed, pureed and added back in to thicken it even further. It's a breeze to make and you probably have everything in your cupboard to make it right now. It's hearty and totally comforting, perfect to curl up with on a cool Spring night." 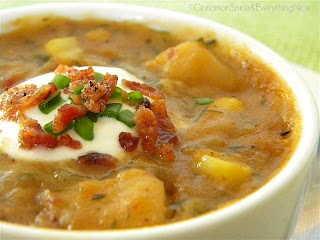 The wonderful Lori from Fake Food Free has been craving grilled veggies for ages and decided to do something about it with this Grilled Vegetable Sandwich. Lori says, "After finding some zucchini and mushrooms in the fridge I decided to grab the grill pan and make an indoor version of a grilled vegetable sandwich for lunch.I sliced up the vegetables, drizzled them with olive oil, and then sprinkled them with this herb rub.I cooked everything for a few minutes on each side, layered everything on the bread (Flax Oat Bran from Great Harvest) and then grilled the sandwich itself to make it more of a Panini. It hit the spot, but unfortunately it has made my longing for grilled foods even stronger!" 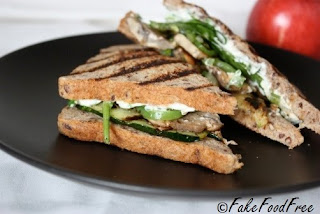 Natashya at Living in the Kitchen with Puppies is multi-tasking this week with her sandwich entry, The Lola Burger. She says, "This week at Michael Symon Sundays we made his famous Lola burger! A gorgeous burger is perched on a toasted English muffin (mine is made from Peter Reinhart's BBA recipe) and garnished with spicy ketchup, dill pickles, bacon, melted cheddar, pickled onions, and a sunny-side up egg. Can you say delicious!? This was a treat and fun to make. The only thing more fun than carbo-loading is fat-loading." 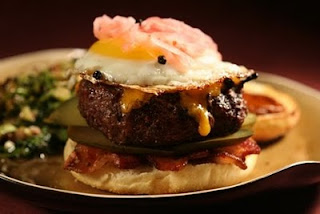 Also a Michael Symon fan and a fan of his burger is Joanne at Eats Well With Others who says, "Bacon cheeseburger. Topped with a fried egg. On a homemade bun. With pickled onions. ... So this week's recipes for Symon Sundays were The LOLA Burger (described above) and Fried Brussels Sprouts with Walnuts and Capers. There was also a recipe for pickling onions in there because that was one of the toppings for the burger. And I added in a recipe for homemade buns. Because of this whole no bread buying thing. After eating these. I'm pretty sure that Michael Symon is my soulmate. So Michael. If you're reading this. Will you marry me?" 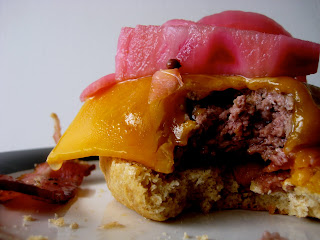 Wow! Some really great soups and sandwiches this week. Thanks to everyone who joined in. If you have a soup, salad or sandwich you would like to share, click on the Souper Sundays link on the side bar for all of the details.
Have a happy week!