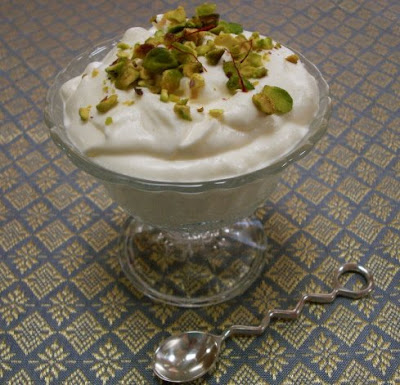 A lifelong lover and devourer of books starting when I was very young with my Dad reading to me, they were a huge part of my childhood. That's why every now and then I still love to read a children's book, whether a classic like The Borrowers or Little Women, or something newer like the Harry Potter series. I was happy to see that Rachel, one of my fellow co-hosts, (along with Jo), of Cook The Books (our virtual foodie book club), had selected a classic English children's book, The Little White Horse written by Elizabeth Goudge and published in 1946, for the group to read. I was unfamiliar with the book, but happy to learn that it was a favorite of Harry Potter creator J.K. Rowling and it also won a Carnegie Medal. (Not to mention a recommendation from the wonderful Foodycat too). 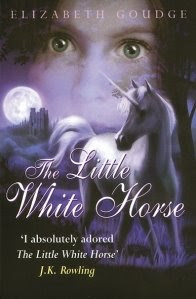 A beautifully written fantasy about the young, orphaned Maria Merryweather, who travels with her governess Miss Heliotrope and Wiggins, her King Charles spaniel, to the mysterious and lovely Moonacre Manor to live with her uncle and new guardian, Sir Benjamin. The story follows Maria, the last Moon Princess, as she tries to solve the mysteries of Moonacre Manor, right the wrongs of her ancestors and bring happiness to the manor, the valley, her friends and family and herself. The book is full of vivid descriptions and imagery that enable the reader to envision the beautiful setting, the delicious food and the inhabitants of the manor, village and the valley surrounding it. There is a cast of colorful and imaginative characters, both human and animal in the novel and I think my favorite has to be Marmaduke Scarlet, the skilled and diminutive cook at the manor. Described by Goudge as a "little hunchbacked dwarf", with a "smile so broad that the ends of it seemed to run into his ears." Maria determines he must "be very old" because "the fringe of whisker that encircled his whole face like a ham frill was snow white, and so were his bushy eyebrows. Except for the whisker frill, his face was clean shaven, brown as an oak-apple, and criss-crossed with hundreds of little wrinkles." An excellent cook, Marmaduke Scarlet considers it very serious business; the kitchen is his private domain and it can only be entered by invitation.
The endless array of delicious British food that Marmaduke Scarlett creates is sprinkled through the book and it was difficult to decide what to make. I finally decided on something I had heard of before but never tried, Syllabub, which Marmaduke makes for dessert while meeting Maria for the first time. Defined in The New Food Lover's Companion: "This thick, frothy drink or dessert originated in old England. It's traditionally made by beating milk with wine or ale, sugar, spices and sometimes beaten egg whites. It's thought that the name of this concoction originated during Elizabethan times and is a combination of the words "Sille" (a french wine that was used in the mixture), and "bub" (old-English slang for "bubbling drink")." In The Little White Horse, the syllabub is described as this, "Twelve eggs went to the making of the syllabub, a pint of cream, and cinnamon for the flavoring." 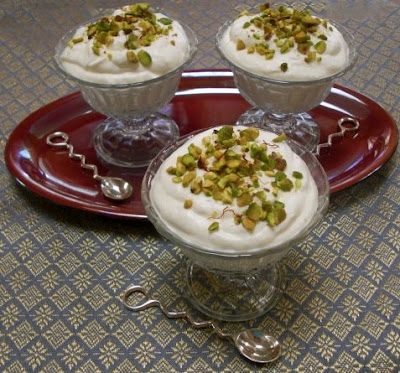 Rather than making the book's version, I went to the great English "Domestic Goddess" herself, Nigella Lawson, to see if she had any syllabub recipes. Perusing her books I found that Nigella had several to choose from, but the one that caught my eye was her Turkish Delight Syllabub from Nigella Bites. Created to taste like a Turkish delight candy, (a sugary sweet, rubbery-textured candy made of cornstarch or gelatin, lots of sugar, pistachios and very often rosewater), it sounded exotic and fun to try. (Plus I love how Nigella's recipes are always written to sound like she is there talking to you while you are making them--very entertaining!)
The recipe can be found in Nigella Bites (page 207) or it is also at the Food Network site here.
About this recipe Nigella says: "This hasn't got the temple-aching sweetness of Turkish Delight, not its palate-cleaving glutinousness, but rather it is a cloud-like spoon-pudding version that attempts to catch the aromatic essence." 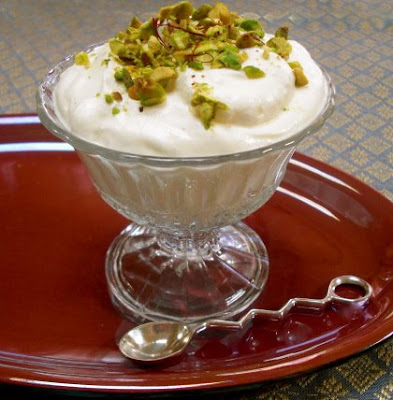 Combine the orange-flavored liqueur, lemon juice and sugar in a large bowl (I use the bowl of my freestanding mixer) and stir to dissolve the sugar, or as good as. Slowly stir in the cream then get whisking. As I said, I use my freestanding mixer to this, but if you haven't got one, don't worry - but I would then advise a handheld electric mixer. This takes ages to thicken and doing it by hand will drive you demented with tedium and impatience. Or it would me.

When the cream's fairly thick, but still not thick enough to hold its shape, dribble with the flower waters and then keep whisking until you have a cream mixture that's light and airy but able to form soft peaks. I always think of syllabub as occupying some notional territory between solid and liquid; you're aiming, as you whisk, for what Jane Grigson called "bulky whiteness." Whatever: better slightly too runny than slightly too thick, so proceed carefully, but don't get anxious about it.

Spoon the syllabub in airy dollops into small glasses, letting the mixture billow up above the rim of the glass, and scatter finely chopped pistachios on top. 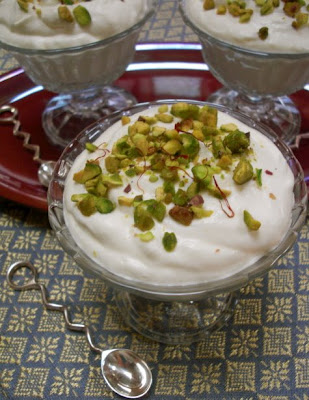 Notes/Results: Oh My! Syllabub is decadent and good without being too heavy; it is very light and fluffy. At one point as I was making it, I thought "OK, I am basically just making softer, runnier whipped cream here, what is exciting about that?" But after tasting this cloud-like concoction, I realized that it is on its own level entirely. The combination of the slight tartness of the lemon juice, the sweet and slightly bitter taste of the Cointreau and the floral essence of the rosewater and orange-flower water blend together so well. Then you have the fluffy, creaminess of the syllabub offset by the crunch of the ground pistachios on top. It is simple to make, other than requiring about 10 minutes or so of whipping to get it to the right texture without getting it too firm. I used my electric mixer and I have to say that it was lucky that Marmaduke Scarlet's arms "were much too big for the rest of him", since he had to whip his syllabub by hand! Although Nigella's recipe is more exotic in flavor than Marmaduke's syllabub, I figured that since he made saffron cake and other delicacies, he wouldn't mind the Turkish influence. In fact I garnished my syllabub with a little saffron too. I do think he would have had a big problem with Nigella herself and her habit of sneaking into the kitchen in the middle of the night for a snack and sticking her fingers into things! 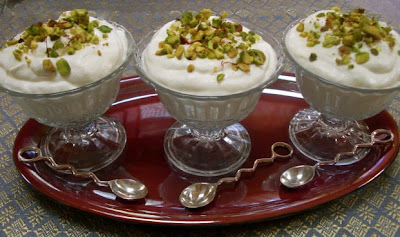 I really liked The Little White Horse, it was an enjoyable and easy read. Thanks to Rachel for selecting it! If you would like to join us at Cook The Books for this round, you have until June 26th to read the book and get your entry representing this book posted. For more details on Cook The Books, and to see our upcoming selections, (It is my turn to host the next round and we will be journeying to China for The Last Chinese Chef by Nicole Mones!), visit the CTB site here.
Posted by Deb in Hawaii at 12:01 AM

Labels: Cook From Each Book, COOK THE BOOKS, desserts