Flipping through May's Food & Wine, there was something about this Colombian Chicken Soup that caught my eye; maybe it was the asparagus or little rounds of corn, or the chunks of potatoes, or the cilantro and cumin flavored broth or fact that it is topped with yogurt, avocado and of all things, my beloved capers. Whatever the reason, it made its way to the top of my "to make" list for Souper Sundays.  Inspired by Reeni's homemade baked Spicy Chile Chips last week, I made my own with chili powder, cumin, garlic salt, onion powder, sea salt and pepper 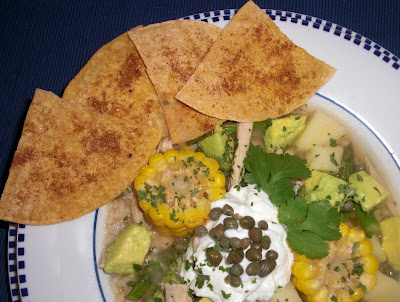 Food & Wine says: "The Good News: Chicken breast adds plenty of protein but not much fat to this version of ajiaco, a cilantro-scented chicken soup that's virtually Colombia's national dish. Stirring in fiber-rich brown rice turns the soup into a satisfying one-dish meal." 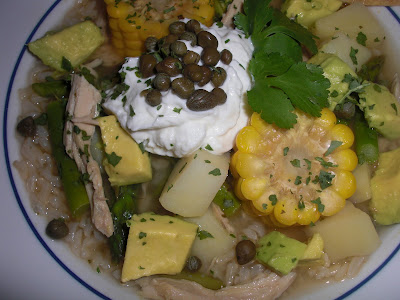 Colombian Chicken Soup
Food & Wine, May 2009
(Makes 6 Servings)
2/3 cup short-grain brown rice
1 1/3 cups water
salt
1 whole skinless chicken breast on the bone (about 1 1/2 pounds)
1/2 cup thinly sliced scallions (about 3)
2 garlic cloves, smashed
2 shucked ears of corn, each cut into 6 rounds
1/2 tsp ground cumin
1/2 cup plus 2 Tbsp chopped cilantro
8 cups low-sodium chicken broth
freshly ground pepper
1/2 lb white potatoes, peeled and cut into 3/4-inch cubes
1/2 lb thick asparagus, cut into 1-inch lengths
1 Hass avocado, diced
1/4 cup plus 2 Tbsp fat-free yogurt
1 Tbsp drained small capers
In a small saucepan. cover the rice with the water and bring to a boil. Reduce the heat, cover and simmer until the rice is tender, 35-45 minutes. Remove from the heat and let stand for 10 minutes, then fluff with a fork.
Meanwhile, in a large saucepan, combine the chicken, scallions, garlic, corn, cumin and 1/2 cup of the cilantro with the chicken broth. Season with salt and pepper and bring to a boil. Simmer the broth over moderately high heat until the chicken is cooked through, about 12 minutes. Transfer the chicken to a plate and let cool slightly. Pull the meat off the bones and shred.
Strain the broth and return it to the saucepan. Return the corn to the broth and discard the remaining solids. Bring the broth to a boil. Add the potatoes and simmer over moderately-high heat until nearly tender, about 8 minutes. Add the asparagus and simmer until the potatoes and asparagus are tender, about 5 minutes longer. Return the shredded chicken to the pot and season the soup with salt and pepper.
Ladle the soup into bowls and garnish with the avocado, yogurt, capers, brown rice and remaining 2 tablespoons of cilantro.
Make Ahead: The cooked brown rice and the soup without the garnishes can be refrigerated separately overnight.
One serving: 336 cal, 9.6g fat, 2g sat fat, 35g carb, 6.6g fiber. 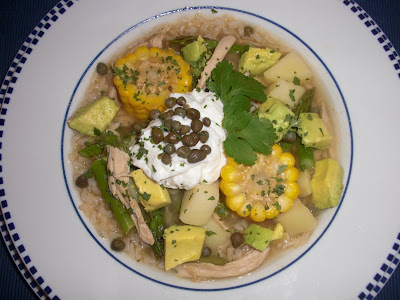 Notes/Results: Really good. Although the combination sounds a bit odd, the flavors come together well. The soup itself is mild in flavor so having the tang of the yogurt and capers really makes the soup. I mostly stuck to the recipe as written with the exception of using the meat from a previously roasted chicken, instead of cooking it in the broth and using long grain brown rice, which is what I had on hand. I also found that squeezing some lime into the soup made it even better. The slightly spicy and crunchy chips were a nice pairing. One note, although it looks great, corn rounds are a little difficult and messy to eat with a spoon so you may want to consider scraping the kernels off the cobs before putting them in the soup. 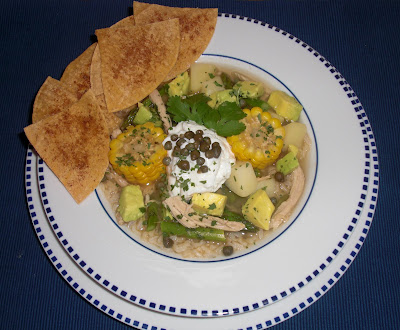 Lets see who we have in the Souper Sunday Kitchen this week.
First up and new to Souper Sundays is LK from Healthy. Delicious., who joins us from Albany, New York. The inspiration for her Navy Bean Soup with Guinness and Cheddar Biscuits, was Mystery Ingredient Challenge, involving ham, rosemary and beer. although not sure originally how the soup would turn out, she was pleasantly surprised with the delicious taste and how nicely the biscuits soaked up the broth. Welcome LK! 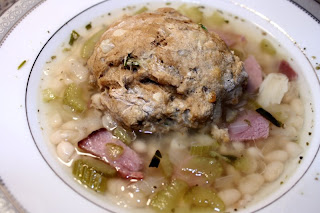 Kim from Ordinary Recipes Made Gourmet has had a busy week, even publishing an appetizer eCookbook among other things. Still she had time to whip up a soup for this week. Not a veggie fan when she was young, green beans being the exception, and her Mom's Green Bean Soup always managed to put a smile on her face. She has recreated this special recipe for Super Sunday, in honor of her Mom and all the memories of being in the kitchen with her. 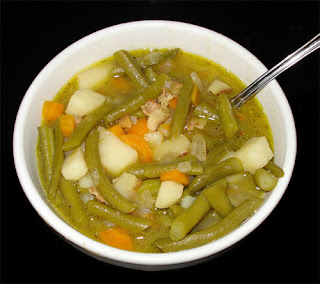 A freezer clean out and a vow to use up what ingredients they had available, had Debbie from The Friday Friends, searching through her notebooks to find the right soup recipe. She found a this Ham and Bean Soup from her friend Mitzi. Debbie loves both how delicious and how easy to make this recipe is as well as how making recipes from far-away friends and loved ones can make you feel closer. 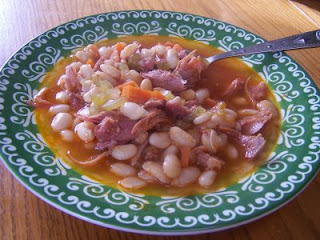 Winds, rain and power outages are no match for a good hearty soup, and that's just what Natashya from Living in the Kitchen with Puppies had waiting for her husband's long commute home. She tried nutritionist and healthy chef Ellie Kriger's Sweet and Spicy Peanut Soup and after doubling the spices, (much as we love her, we agree Ellie needs to add more spices to many of her recipes), she had a simple, healthy and tasty soup. 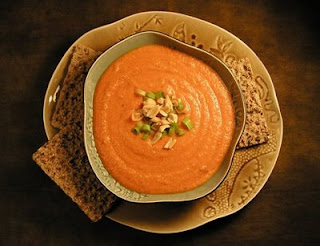 Just back from vacation means plenty to do and catch up on like laundry, gardening, etc., so Ulrike from Küchenlatein needed a simple, no-fuss soup. She found one in this slow cooker Broccoli Soup with Garlic and Olive Oil. Seasoned with her home-grown lemon thyme, and pureed enough that her sons, not fans of broccoli would eat it, the soup was a perfect hearty, healthy dinner. 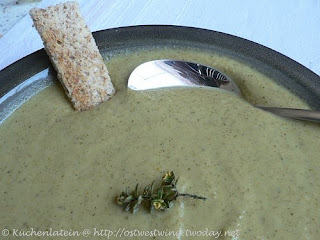 A case of pomegranate juice and a lot of creativity resulted in a Sweet and Spicy Chili by Heather at girlichef this week. Flavored with the pomegranate juice, peppers, allspice, star anise, and other spices, gave the chili a spicy kick as well as a warm, not cloying sweetness. Heather says that all the beans and chunky cuts of veggies make it "a feast for the eyes and the soul...as well as being satisfying to the tummy."  Yum! 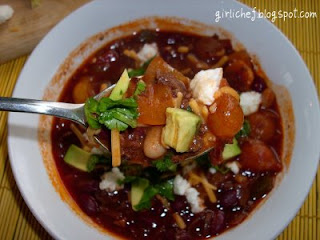 Another week with more delicious and satisfying soups. Thanks to everyone who participated this week! And thank you or mahalo to all of you who join in or come by to see the wonderful soups everyone makes and comment on them.
-------
Souper Sunday Announcement!
As I mentioned last week, the weather is getting warmer and while for many of us soup is a year-round dish, I get lots of comments that people are making less soup this time of year. Because I enjoy the community that has been created when we gather around soup, I would like to keep it going and I thought it might be fun to open things up a bit; so I'd like to introduce Souper (Soup, Salad and Sammies) Sundays. (Yes, I believe the more alliteration in a name, the better it is!)
Although the Souper Sunday name will remain and soup will still be a major player, (and what I make most often since about 40-50% of all of my saved and tagged recipes are soups!), salads and sandwiches, or "sammies", are excellent companions to soup and also great and easy meals that I find myself making frequently.
Beginning next week, you can send a soup, (or stew, chili or soup-like creation), a salad, (greens, fruit, pasta; you name it!) or a sandwich (bread, wrap, pitas, etc.), or any combination of the above to Souper Sundays. What can't you send? Oh, I don't know, maybe a leg of lamb--unless it is in a bowl with broth, on top of lettuce or between two pieces of bread! ;-)  Otherwise, it's pretty open. This way we can still celebrate the soup we all love but see some creative salad and sammie recipe ideas too. We will try it out for the next few months and if everyone likes it, we will keep it going year round. Let me know your thoughts and I'll be updating the Souper Sunday, now Souper (Soup, Salad and Sammie) Sunday details page to reflect the changes.

Have a great week and I hope to see you here next week with your favorite soup, salad, sammie (or a combo) recipe!
Posted by Deb in Hawaii at 12:15 PM