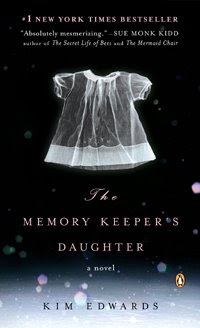 In May, I joined a Blog Book Club that I was really excited about. A book was chosen for everyone to read and then we were to make a dish that was inspired by the story or its characters. (If you look here you can see my posting for Book 1 and here for Book 2). I was really excited about the book club idea as I love to read as much as I love to cook and I like sharing about both with others. Trouble is I may have been the only one excited about it. Three books were listed, one for each month, our first round up was posted but the second round up for June has not been posted yet, there is no book listed for August and I have a feeling there might not be a posting for the third book that is due tomorrow. Why am I going ahead and posting it my thoughts on the book and my recipe then? Well basically I went to the effort of buying a second copy of the book as I had read it a couple of years ago and then had passed it on to someone else. I read it again and was reminded of how much I like this book so I am going ahead and having my little book club moment anyway! ;-)
The Memory Keeper's Daughter by Kim Edwards, is the story about an event that changes many lives. During a snowstorm in the 1960's unable to get through to the hospital, a young doctor, David Henry delivers his own twin babies, aided by his nurse, Caroline. When he realizes his baby daughter has Down Syndrome, he asks his nurse to take the baby away to an institution and tells his wife Norah, that the baby girl died at birth. In love with David, Caroline can't give Phoebe, the baby away and instead takes her away to raise her. David's decision impacts all of them as his guilt damages his marriage and his relationship with his wife and son Paul, Norah never stops mourning her daughter and Paul feels distant from his father. Caroline has her own guilt and struggles as she raises a daughter with special needs in a time when that was not an accepted thing to do. The book traces their paths for the next 25 years as they all live within the shadow of David's and Caroline's decisions. This is a beautifully written book. At times it can move a bit slow but I found myself deeply engrossed in the lives of these people.
I wasn't sure what to make to represent the story best. Lately I have been studying tea as well as herbal infusions and was looking through a book that talked about different herbs and their meanings. I noticed that rosemary most often represents memory or remembrance, immortalizing those we have lost. Spearmint represents warmth of sentiments--feelings and emotions. The book has these two themes throughout, the memories, feelings and emotions of all of the characters drive the story. I thought about iced tea, which Phoebe makes and decided to add the herbs to an iced black tea, sweetened with honey. It tasted good, but seemed to be missing something so I added some lemonade and some lemon slices because lemon symbolizes zest which seemed fitting when I think of Phoebe and the pleasure she gets from living and the things and people she loves. 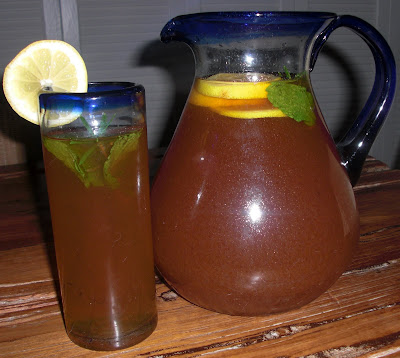 Phoebe's Rosemary-Mint Iced Tea with Lemon
-----
1 quart water
6 good quality black tea bags (I used Mighty Leaf Organic Breakfast tea)
1 bunch mint
6 rosemary springs
1/2 cup honey
2 quarts lemonade (your favorite recipe or frozen "country style" concentrate
lemon slices to garnish
-----
In a large pot bring the water to a boil. Remove the pot from heat, add the tea bags, 1/2 the mint and 4 springs of rosemary, cover with a lid, and allow the tea to steep in the water for about 15 minutes. Remove tea bags and place pot in refrigerator (or pour tea into large jug) and cool in refrigerator for about 1 hour. Meanwhile take a large pitcher and pour the honey into the pitcher then add about 1/2 cup hot tap water. Stir the honey around to dissolve. Strain tea to remove mint and rosemary. Pour the tea into the pitcher with the dissolved honey, stir well. Fill the pitcher with cold lemonade to make about 3 quarts and stir.
-----
To serve, pour each glass of tea and garnish with a slice of lemon, small sprig of rosemary and a few mint leaves.
The tea tasted refreshing and bright, you could taste the rosemary and mint but it didn't over power it. Nice for a warm summer day!
-----
And there it is--my tale of book club woe! Have you read the book and did you enjoy it? Any comments or insights on it you want to share? Does anyone know of another blogging book club or want to join one? Let me know!
Posted by Deb in Hawaii at 12:01 AM