Nothing makes me happier than a creamy, not too spicy curry. Other people may like to "go for the burn" but I like to be able taste my food rather than burn off my taste buds so that I can appreciate the nuances of all of the different spices. There is a lot to appreciate in Jamie Oliver's Chicken Korma--it is slightly sweet, nicely spiced and just a little tangy from the lemon and yogurt spooned on top. A great choice for our "Chicken and the Egg" theme at I Heart Cooking Clubs this week. 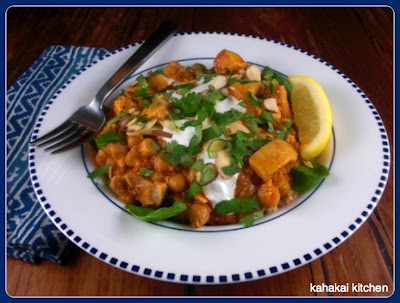 This would be a U.K.-style korma according to Wikipedia which states, "A dish called "korma" is very popular in Pakistani/Indian restaurants in the United Kingdom. In the UK a korma usually refers not to a particular cooking technique but to a curry with a thick, cream-based sauce or gravy; this bears little resemblance to a classical Indian korma, as it is not braised. The korma popularised in UK curry houses is invariably mildly spicy and may often feature nuts, usually almonds or cashews, and coconut." 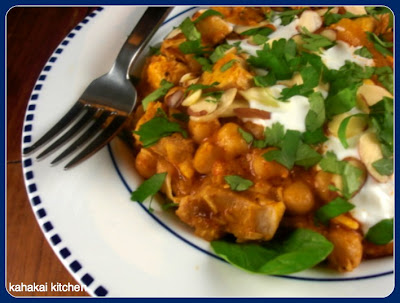 BTW: Jamie does include a recipe for an easy korma paste (below) which I intended to make but meetings ran late, there was traffic on the way home and I just wanted to eat my curry and didn't want to mess with the extra time and mess of toasting and grinding spices, cleaning the food processor, etc. Lazy? Yes... I don't deny it. But since I also had a jar of the korma paste that Jamie recommends (Patak's) languishing in my pantry cupboard and getting dangerously close to the expiration date, it seemed like I should use it.

Jamie says, "This is a much-loved curry. It's got a slightly milder, creamier taste than the other curries in this chapter, which makes it a great one for kids to try. Because I love fresh chiles I've added one here, but if you want to keep the flavors nice and mild feel free to leave it out. Kormas are also delicious made with shrimp."

To Make Your Curry:
Put a large casserole-type pan on a high heat and add a couple of lugs of oil. Add the onions, chile, ginger, and cilantro stalks with the butter. Keep stirring it enough so it doesn't catch and burn but turns evenly golden. Cook for around 10 minutes. Add the curry paste, coconut milk, half your sliced almonds, the drained garbanzo beans, unsweetened shredded coconut, and sliced chicken breasts. Half fill the empty can with water, pour it into the pan, and stir again. Bring to a boil, then turn the heat down and simmer for 30 minutes with the lid on. Check the curry regularly to make sure it's not drying out, and add extra water if necessary. When the chicken is tender and cooked, taste and season with salt and pepper--please season carefully.

To Serve Your Curry:
Serve with rice. Add a few spoonfuls of natural yogurt dolloped on top, and sprinkle over the rest of the sliced almonds. Finish by scattering over the cilantro leaves, and serve with lemon wedges for squeezing over.

First peel the garlic and ginger. Put a frying pan on a medium to high heat and add the spices for toasting to the dry pan. Lightly toast them for a few minutes until golden brown and smelling delicious, then remove the pan from the heat. Add the toasted spices to a pestle and mortar and grind until fine, or put them in a food processor and whiz to a powder. Either way, when you've ground them whiz the toasted spices in a food processor with the rest of the ingredients until you have a smooth paste. 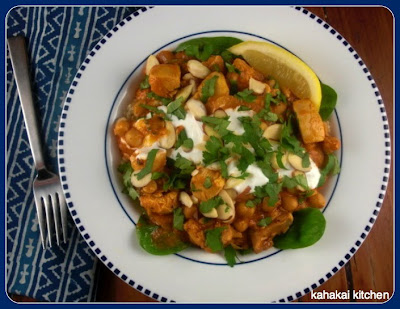 Notes/Results: Creamy and delicious comfort food that made my stomach content. For the most part I stuck to Jamie's recipe--but I did swap out half of the (organic skinless/boneless) chicken breasts for (organic skinless/boneless) chicken thighs as they are cheaper and actually I prefer the dark meat in curries as it stays juicier. I also used light coconut milk and non-fat yogurt. The curry's flavor was good--it's mild, even with the chili and I liked how both the yogurt and the squeeze of lemon livened it up--I also added extra curry paste for a bit more flavor. The chick peas, shredded coconut and sliced almonds in the curry give it an interesting (in a good way!) ;-) texture.

To serve the curry, I used a base of regular brown rice (it was what I had leftover in the fridge), and if you look closely at the photos you will see some baby spinach leaves peeping out along the edges. I like to add a handful of spinach on top of the rice to get more of those nutrient-packed leafy greens into my day and also, the warm curry makes it "wilt" so nicely. A great dish and another Jamie recipe that I would make again--maybe trying Jamie's korma paste recipe the next time.

You can see whether the other IHCC participants chose the chicken or the egg by going to the post here and following the links.