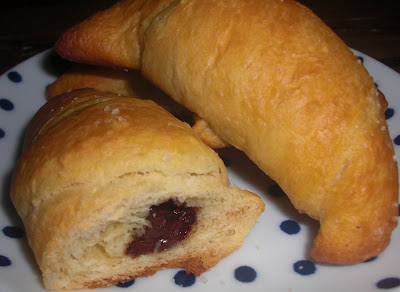 A combination of work, watching the Olympics, needing to re-stock the refrigerator and just life in general have made it tough for me to kick it back into gear with cooking and posting this week. It seems like I have eaten a lot of meals out (but nothing so spectacular to make me want to take pictures of it) and have not cooked much. I thought I should post something while waiting for some inspiration and initiative to strike and I made these the night my fridge crashed (comfort was needed!). I bought a can of Pillsbury Crescent Rolls because I had a random idea for them that I wanted to try. In New York, I tried a wonderful thing at The Chocolate Bar called a Barcelona--which was a baguette with olive oil, chocolate and sea salt. Loving it so much, I made it into Barcelona Bites for Stephanie's Blog Party (you can find that post here). I started thinking that it would be a good combo inside some flaky pastry as well and not wanting to make pastry myself, thought I could put them in a crescent roll to "test my theory".
I whipped these babies out with some organic semi-sweet chocolate chips, a nice fruity olive oil and a light sprinkle of some sea salt. Then rolled them up and baked them following the package directions. (I also sprinkled a little sea salt on top of the crescents before I baked them).

The Results: The combo is unbeatable and just as tasty inside pastry as it is on a baguette. They were delicious as an after-dinner treat all nice and melty, and good the next day for breakfast too. I think it would be delicious in a puff pastry as well. It's a quick and easy chocolate fix when you want something sweet and salty. 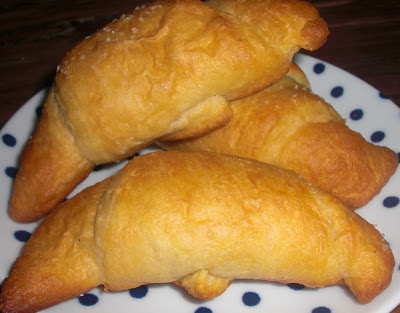