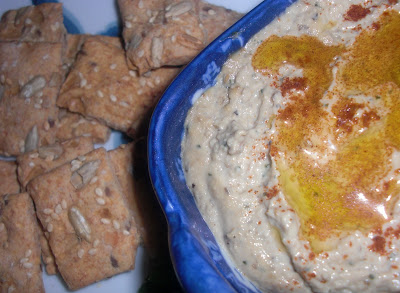 I had a couple of small eggplant that I needed to use from this week's and last week's CSA boxes. I thought about cooking with them; putting them into curry or something but ended up deciding to roast them and make some Baba Ghanoush. I am not sure exactly where this recipe came from, I have been making it for several years now and basically I just kind of throw it together.
Baba Ghanoush
-----
1 large or 2 small eggplant
1 garlic bulb
2 Tbsp olive oil plus additional for cooking eggplant
3 Tbsp tahini (sesame seed paste)
juice from 1 lemon
1 tsp ground cumin
1 Tbsp chopped fresh mint
sea salt and pepper to taste
-----
Preheat oven to 400 degrees F. Cut off the stem and halve the eggplant, rub the cut side with olive oil and sprinkle sea salt on it. Place the eggplant cut side down in a baking dish coated with olive oil and pierce the skin in several places with a fork. Cut the top of the head of garlic off, sprinkle a bit of olive oil on it and place it in the pan with the eggplant. Roast the eggplant and garlic for about 45 minutes, until the eggplant is tender and can be pierced easily with a fork. Remove from oven and allow to cool. When completely cool, scoop the flesh from the eggplant with a spoon and put it into the bowl of a food processor or blender. Squeeze out roasted garlic from clove and add to egg plant. Add tahini, cumin, lemon juice, 2 Tbsp olive oil, and mint and process mixture until smooth. (If you need to thin out the mixture, add additional olive oil as needed). Add salt and pepper to taste. Spoon into a bowl and let sit for about an hour before serving to allow flavors to meld. Before serving, drizzle some olive oil and sprinkle some smoked paprika on top.

Notes: You can omit the tahini if you like, just add a bit more olive oil. Serve with vegetables or pita or use as a sandwich spread. It also makes a nice pairing with the Tibetan Bread in yesterday's post or these seeded spelt crackers. 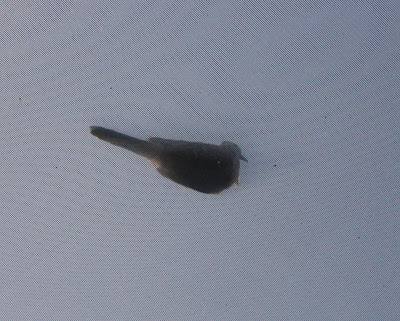 What is this strange picture? A bird hanging out, just sunning himself on top of one of the skylights in my house. He kept Max chattering and entertained for quite awhile before moving on.