The Book Tour Stops Here: We Only Know So Much by Elizabeth Crane with Fresh Blueberry Crisps 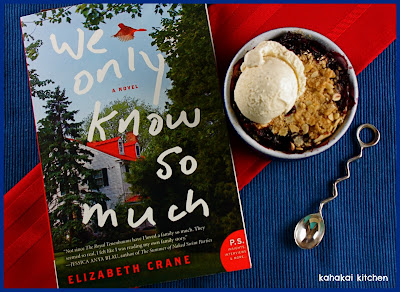 You think your family has issues? The multigenerational Copeland family puts the dys in dysfunctional. There's Gordon, a man who cherishes (his own) knowledge but seems to be losing his memories, his wife Jean, shut off and withdrawn from the family and mourning the loss of her artist lover who took his own life. The kids are teenager Priscilla--"an extreme brat" and nine-year-old Otis, "sweet" but a bit strange. They reside in a large colonial house in a Midwestern college town along with Gordon's father Theodore, suffering from Parkinson's disease, and Theodore's mother Vivian, 98, crotchety and hyper-critical.

Together at the table at meals times and weekly game nights, each person is too tied up in their own world and in their own drama to care much about what is going on with the others. A summary at the end of the second chapter says it best: "Review: difficult daughter, know it all dad, son sweet and okay if a little weird, mom delayed potential/having affair, great-grandmother bitchy, grandad losing it." 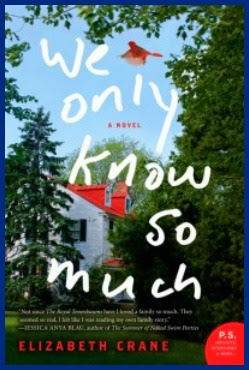 We Only Know So Much, a novel by Elizabeth Crane (gives a funny, sarcastic, and at times touching portrayal of an "average"--but maybe not so average American family. The story is told through a narrator, observing the family and reporting the details. None of the characters, with the exception of maybe young Otis, is particularly likeable and it is difficult to really feel too involved with any of one them. But, in every family there are typically certain members you don't particularly like or connect with. (If you are reading this and related to me, of course I am in no way speaking of you. You know who I am referring to) ;-) The Copeland family just has an excessive amount of those family members. Still, the humor (I like sass and sarcasm) and Crane's gift for storytelling kept me involved and wanting to know what was going to happen. This book makes a good summer read, providing a chuckle or two and some relief that this (hopefully) isn't your family. 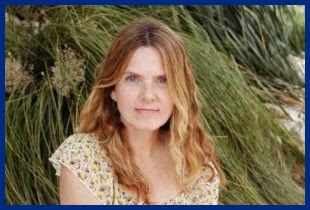 This is Elizabeth Crane's first novel. She is the author of three short story collections; When the Messenger Is Hot, All This Heavenly Glory, and You Must Be This Happy to Enter. Her work has been featured in McSweeney’s The Future Dictionary of America, The Best Underground Fiction, and elsewhere. 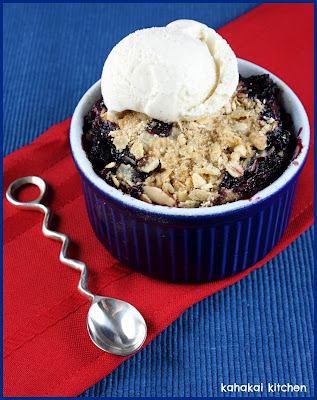 There is food mentioned here and there in the book, although it doesn't play a major role. So, for my dish inspired by it I decided on a good American-style dessert--a fruit crisp. I had a bunch of fresh organic blueberries leftover from loading up at a Whole Foods sale and I baked a double-batch of this Cooking Light Blueberry Crisp for a friend's birthday celebration. (No pictures of that one) It was a huge hit but I just got a small serving and was craving more, so I halved the recipe and made some individual crisps. (Easy portion control.) I made several changes to the recipe--noted in red below, primarily omitting the cornmeal, upping the oats and cinnamon, using a vegan butter substitute and using a white wheat flour.

Weigh or lightly spoon flour into a dry measuring cup; level with a knife. Combine flour and next 6 ingredients (through cinnamon) in the bowl of a food processor; pulse twice to combine. Add butter; pulse 5 times or until the mixture resembles coarse meal. Spoon topping evenly over blueberries, packing down lightly.

Bake at 375° for 30 minutes or until filling is bubbly and topping is golden. 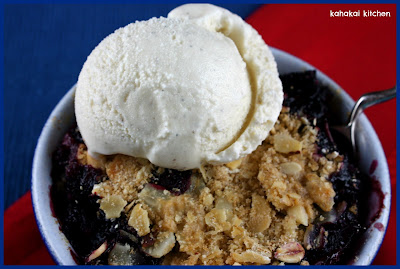 Notes/Results:  You can't beat a warm fruit crisp--and with the fresh, juicy blueberries, this one was particularly good. Sweet, cinnamony, and perfect with a little vanilla bean ice cream. I will make this again. 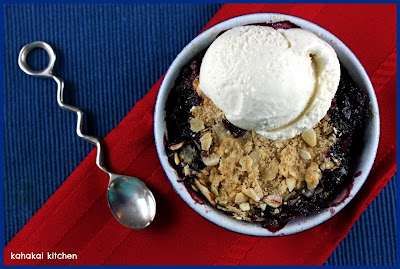 Note: A review copy of We Only Know So Much was provided by the publisher and TLC Book Tours. I was not compensated for this review and as always my thoughts and opinions are my own.