Smashed Pea and Barley Soup may seem more like a fall soup to some people. But to me--soup doesn't really have seasons. I may not pick this one for our very hottest days without trade winds in August (still not that hot as compared with other places of course), but, even on a low-80's, slightly humid kind of night it was delicious. And, I added some zucchini, so it is now officially a summer soup! 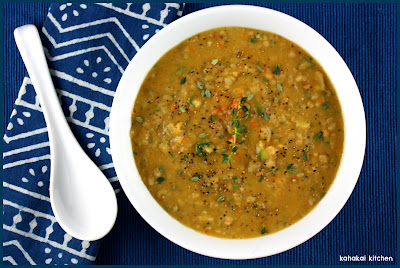 This is my rendition of one of my favorite restaurant soups, the Dakota Smashed Pea and Barley Soup at California Pizza Kitchen. (Where they, smart people that they are, serve it all year-round) ;-) I had lunch with a friend at CPK last week and after enjoying a bowl, it has been on my mind ever since. Then my neighborhood natural foods store was featuring a similar pea and barley soup this week and I decided that rather than spending $5-6 on single servings made by others, I might as well make my own version. 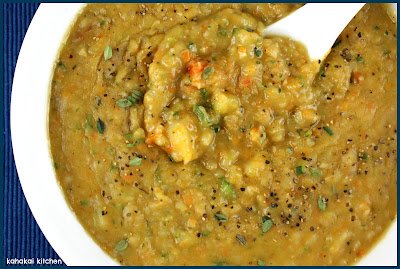 
Sort, rinse and drain the dried split peas and pearl barley. Combine in a large soup pot, with water, bay leaves, lemon thyme, sage, cumin and liquid smoke. Bring to a boil over high heat, then reduce heat and simmer, covered for about 25 minutes, stirring occasionally.

In a separate saucepan, heat olive oil over medium heat and add onion, garlic, carrots and celery and saute about 8-10 minutes until they soften, and onions begin to brown. Add potato and zucchini and cook for about 10 minutes. Pour veggies into soup pot, cover and simmer until vegetable are tender, another 20 to 25 minutes, stirring occasionally and adding small amounts of water if needed.

Discard bay leaves. Blend 1/2 of the soup in a blender or using an immersion blender and return to pot, stirring to mix well. Season to taste with salt and black pepper.Ladle into bowls and garnish with extra lemon thyme. 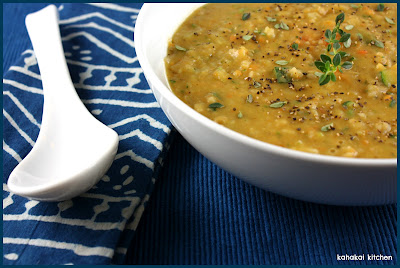 Notes/Results: Split pea soup is never really pretty, but it sure is good. This one has that combination of smoky and slightly sweet from the veggies that I like so much. I ended up cooking the soup completely, then pureeing half of it for a cross between smooth and chunky. But, you can make it however you want. The CPK version, and the one at my deli are both vegan, so no changes were needed. This is a soup that freezes pretty well--not that I am seeming to get tired of it so far. ;-) I will make it again. 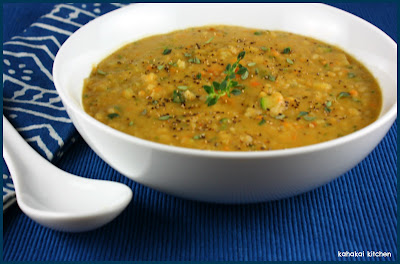 Let's check out the Souper Sunday kitchen and see who awaits:

First up, help me welcome Nancy of Rivertree Kitchen, joining us for the first time at Souper Sundays from rural Wisconsin with this pretty Roasted Red Pepper Soup. Nancy says, "The soup, served hot, is reminiscent of a really good tomato soup, but with a deeper, more complex flavor. Cold, it’s similar to a gazpacho, but smoother both in texture and in taste. That little splash of cream is a luxurious finishing touch. It’s also an effective way to lessen the heat of a too-spicy dish, if that’s an issue." Welcome Nancy! 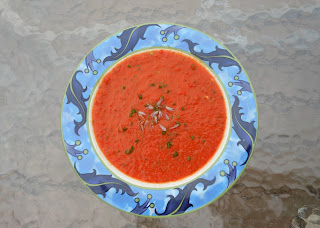 Simona of briciole made a beautifully-garnished Minestra d'orzo e Borlotti or Barley and Borlotti Soup and says, "Often the colors in a dish are a good part of its appeal, but other times there is a disconnect: the dish doesn't attract the eyes, yet its flavor is excellent. As I was cooking the soup in the photo, I was already dreading the camera session. "But the soup looks nice," some of you may object. Not only that, it has also the nice earthy flavor of grains and beans, deepened by roasted tomatoes." 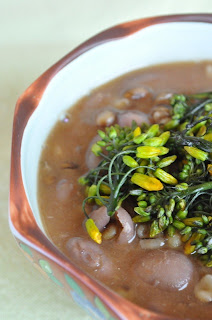 Victoria of Flavors of the Sun had cold soups on her mind this week with this two-tone bowl of Chilled Gazpacho and Tzatziki Soups. She says, "Pouring a two-tone soup a really easy technique, is such fun to teach because it is always impressive to see two contrasting colors, two contrasting but complimentary tastes side-by-side in the same bowl.  It's just fun to make, fun to serve. I chose yellow bell pepper, avocado, and croutons, and basil for garnishes, but there are many possibilities.  Delicious after only 2 hours of chilling, they were even better the next day." 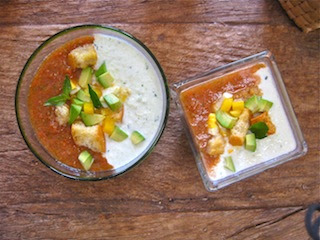 Ahkeela of Torviewtoronto is back and she made a simple Leek Potato Soup this week that can be served either hot or cold. She says, "The soup cube already has salt so I didn't add any salt. The bay leaf can be removed or left in the soup before pureeing. Add about 1/4 cup water if needed and the cream.  Reheat for a quick minute if you want to serve the soup warm. 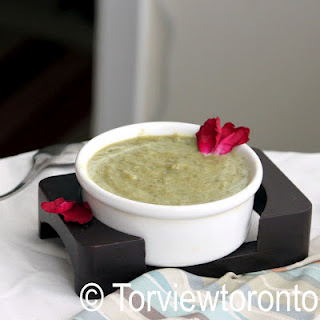 Janet of The Taste Space has a soup and a salad this week. Her soup is a Creamy Broccoli Dal, about which she says, "This is one of our go-to recipes because it is so packed with flavours. Indian-inspired flavours like cumin, mustard seeds, turmeric, chile flakes and garam masala really make this pop. The red lentils cook away into a creamy background interspersed with bits of broccoli (we use both the florets and stem). If you are anti-bits, just use the stems. If you are anti-broccoli (gasp!), just use the stems, because only the florets give it away that veggies are hidden in here." 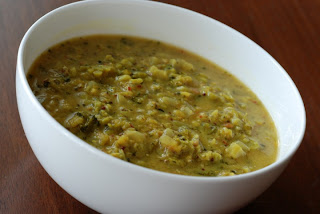 Janet also has this bright and colorful Raw Citrus Kale Salad to share and says, "...I really enjoyed the citrus kick from both the orange and lime juices. It paired well with the kale, and the addition of onion and pine nuts made this even better than the raw kale salad at Greens! I prefer my salads to be on the less sweet side, so feel free to add more agave, to taste, depending on the sweetness of your oranges." 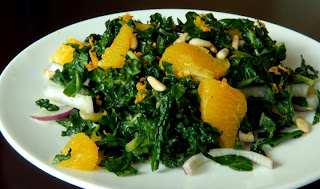 Wonderful recipes this week--mahalo to everyone who joined in! If you have a soup, salad or sandwich that you would like to share, just click on the Souper Sundays logo on the sidebar for all of the details.