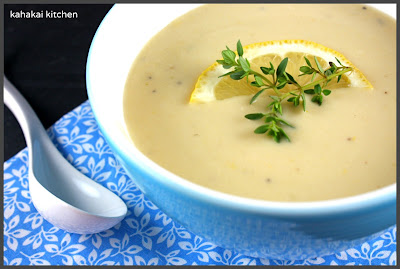 This was one of those standing in front of the fridge at 7:00 PM, needing a soup for this week but having no idea of what to make times. It was a long grubby Saturday working on a file clean out project for work--so it had to be quick and easy--I had no patience for more. There were potatoes that needed to be used and some cashew cream (the genius vegan or non-dairy answer to silky thick cream or sour cream) already made. Wanting something a little more special than a cold potato soup, I got out a can of artichoke hearts from the pantry and tossed it together with some onions. celery, lemon thyme and lemon juice. The result? Creamy Artichoke-Lemon Soup--a silky, smooth and rich tasting soup that you would never know didn't contain heavy cream--or any dairy at all. I had a warm bowl for dinner, but in my opinion, it was even better cold the next day. 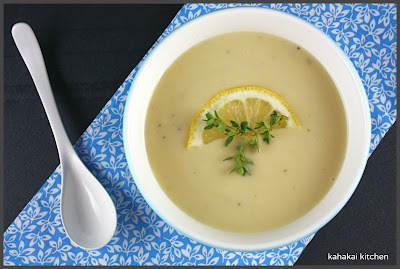 Heat olive oil in a soup pot over medium heat. Add the onion and celery and stir. Saute until onions are softened, about 5 minutes. Add garlic, lemon thyme and bay leaf and continue sauteing for another 5 minutes. Add the potatoes artichoke hearts, veggie broth, salt and pepper and cook until potatoes are soft and tender about 20-25 minutes.

Blend in batches (or use a handheld blender) until smooth. Rinse soup pot and return blended soup to pot. Add the lemon juice and stir in the cashew cream until well combined. Taste and add additional seasoning if needed.

To serve warm, heat over low until desired temperature. Or, chill until ready to serve. Garnish with thin slices of lemon and a bit of lemon thyme. 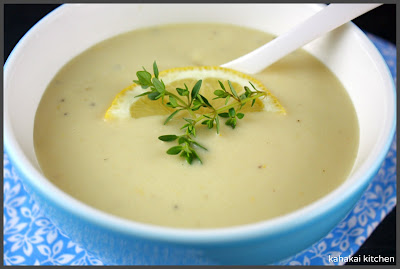 Notes/Results: Yum... Great flavor and texture. The potatoes make it thick, but the cashew cream is what gives it a velvety mouthfeel that is great in a warm soup but even better in a cool or cold soup. The richness is offset by the brightness of the lemon and the artichoke hearts--making it a well-balanced bowl. This soup goes together quickly and easily--a cup would be an elegant starter to any meal. Like a vichyssoise but with a little something more--I would make this again 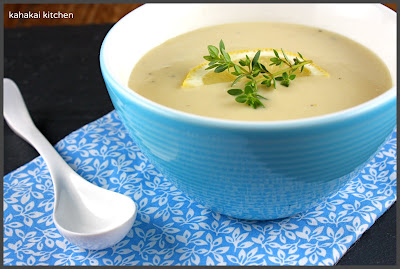 Let's check out the Souper Sundays kitchen and see who is here.

Tigerfish of Teczcape - An Escape to Food made the most of leftover dumpling filling this week and says, "Ended up with more filling than wraps after making boiled dumplings? Make chives meatballs from the remaining filling. Then make a quickie chive egg-drop soup and gently cook the meatballs in the soup. This is Chives Shrimp-and-Meatballs in a Chive Egg Soup.  You can also call it Surf-and-Turf Soup with the combination of seafood and poultry in the meatballs." 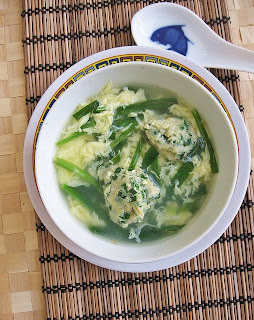 Victoria of Flavors of the Sun is here with a cooling Okroshka: Cold Russian Soup and says, "I recently made a cold soup from memory, based on a Russian soup I had taught in a class a few years ago. ... This soup is really a salad in a bowl, filled in with liquid yogurt or kvass.  All of the ingredients should be served cold, whether presented as I do as a yogurt soup with separate garnishes or more traditionally, all stirred together.  This particular soup is often considered to be from Uzbekistan." 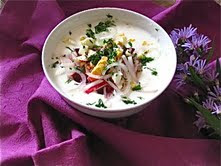 Janet of The Taste Space has two salads to share this week. First, this filling Quinoa and Chickpea Salad with a Balsamic Tahini Dressing that she says is "...a light yet hearty quinoa and chickpea salad punctuated by bursts of cherry tomatoes, cucumber and slivered kale. I usually massage my kale, but here, it countered the quinoa and beans nicely with its crunch. I added the dressing just before I ate so that it would still be quite light. I assumed the quinoa could probably absorb a heck of a lot more of the dressing, but this way it was wonderful." 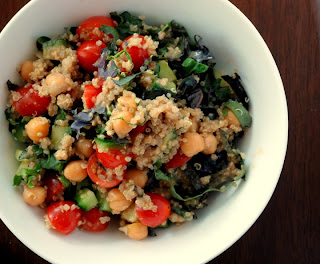 Janet's second offering is this Grilled Balsamic Mushroom and Quinoa Salad with Walnuts. She says, "...portobello mushrooms alone do not make a meal, so instead of a garlic white bean puree, I opted to add quinoa and toasted walnuts for crunch. This way, you do not lose any of the fabulous garlic-thyme-balsamic marinade and you get a filling meal that is also great as leftovers. Because, yes, it is very sad. I do not like to share my mushrooms. They are just too good." 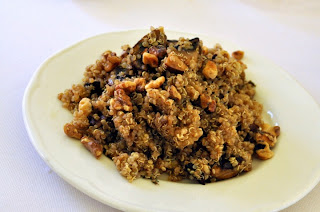 Joanne of Eats Well With Others used some sick-in-bed time to shuck beans and make this Warm Fava Shallot Barley Salad. She says, "The time eventually comes when you have to dig your spoon out of that jar of nutella you've been self pity-eating. Pull yourself up by your bootstraps. And start shelling. Best to stick with the favas, and this salad, which will make up for that nutella consumption and may even allow you to wake up on Sunday morning to fully functional kidneys and a strong and undeniable desire to run seven miles. Or not. But it will certainly make your taste buds happy." 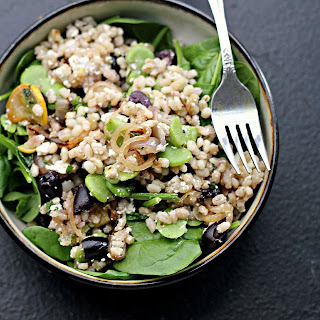 Debbie of Easy Natural Foods recreates a restaurant dish with this Warm Stir Fried Chicken Salad. She says, "This dish, modified from a recipe in the Wagamama cookbook, is a favorite of ours. Actually it’s my husband who typically makes this dish – one of the few he makes, and it comes out delish every time. ... This is such a simple dish to make, and really quick too, so perfect for a weeknight if you marinate the chicken earlier in the day or the night before."

Finally we have one hearty sandwich this week from Graziana at Erbe in Cucina, these Vegetarian Burgers with Clary Sage. Graziana says, "The clary sage is a variety of sage with large, thick leaves. I used it for a vegetarian burger recipe. To create a quick snack, I prepared a yogurt sauce with basil and chives garlic ...and harvested some tomatoes from my rooftop. We really enjoyed this vegetarian burgers, fresh and tasty, and also my fussy three years old child approved it." 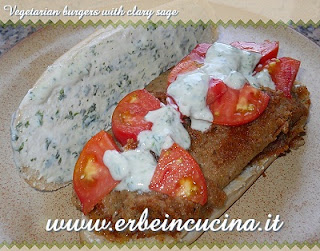 Some delicious and unique recipes this week--mahalo to everyone who joined in! If you have a soup, salad, or sandwich that you would like to share, just click on the Souper Sundays logo on the side bar for all of the details.

Happy July, and have a happy, healthy week!