A few weeks ago I adapted a Sam Choy recipe for Coconut Cream Spinach Sauce to make it much healthier and used it on some local monchong fillets, (see post here). It was delicious but it made me keep thinking about the other half of the recipe which was fish, (in Sam's case it was mahimahi), crusted with a coating of sesame seeds and macadamia nuts. I thought the combination of the crusted fish with the creamy sauce (especially Sam's full-fat version) seemed like a bit too much, but separate the two parts, lighten them both up, change a few ingredients and you have two great dinners. 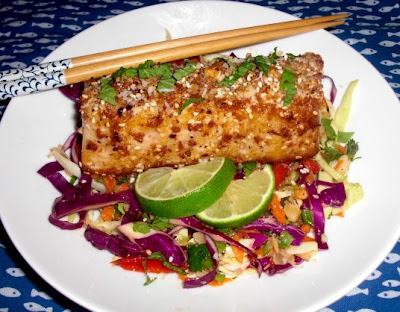 Sam's Sesame-Mac Nut Crust has finely chopped mac nuts, sesame seeds and panko crumbs and is dipped and flour and egg and fried in a good amount of butter and olive oil. My version combines the mac nuts with sesame seeds, adds some unsweetened shredded coconut, and switches the regular panko to whole wheat panko crumbs. I omitted the flour and egg, just pressing the crust into the moist fish and pan seared it in about a Tablespoon of olive oil. For my fish, I used some fresh, local Opah steaks. If you are not up on your local Hawaiian fish, Opah or Moonfish is one of the most colorful fish, with a silver body and rose-red fins. It is rich, a bit fatty, with tender white flesh and a mild slightly sweet flavor. Although it can be eaten raw, it is most often poached, baked or sauteed. 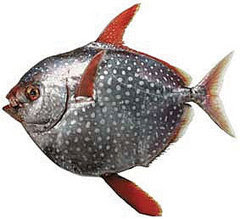 Sam and I do agree on one thing--just coating one side of the fish with the crust. Sam says, "I like to crust just one side of the fish because it makes for a nice contrast in textures--crisp on one side and moist on the other." I would add that when you are using, higher fat/calorie coating ingredients, coating just one side of the fish, cuts down the amount you use, thus lowering your fat and calories.
Sesame-Mac Nut-Coconut Crusted Opah
Adapted from Sam Choys Island Flavors
(Serves 4)
4 (5-6oz) Opah steaks (or substitute your favorite fish)
Sesame-Mac Nut-Coconut Crust (recipe below)
1 Tbsp olive oil
Dip one side of each piece of fish in crust mixture and press crust firmly into fish. Heat 1 Tbsp olive oil in a large pan. When pan is hot, add fish, crust side down and cook about 1 1/2-2 minutes (watch carefully as mac nuts will brown quickly). Turn and cook other side about until fish is cooked through (time will vary from 2-4 minutes based on thickness of fish.
Serve warm with rice, slaw or salad and fresh lime wedges to squeeze on fish.
Sesame-Mac Nut-Coconut Crust
(Makes 1 1/4 cups)
1/4 cup finely chopped macadamia nuts
1/4 cup roasted sesame seeds
1/4 cup unsweetened, shredded coconut
1/2 cup whole wheat panko crumbs
1/2 tsp salt
1/4 tsp pepper
Mix ingredients well 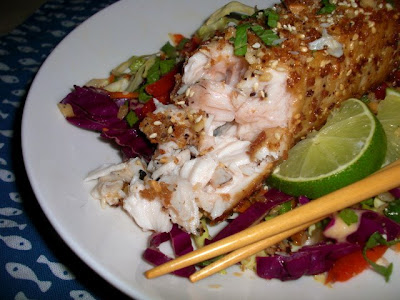 Notes/Results: I didn't try Sam's original recipe but this crust was ono! (delicious!) The coconut and whole wheat panko made it nice and crispy and it was perfect on the moist fish. The crust would work well on any kind of somewhat-firm white fish if opah isn't in your neck of the woods; mahimahi, halibut, tilapia. etc. I served it on top of some leftover Asian Slaw from the cookbook review of Memorable Recipes I posted here. With the combo of cabbages, red pepper, carrot and herbs and a light gingery dressing, and topped with some chopped fresh mint and lime, it was a great warm weather meal.
Posted by Deb in Hawaii at 12:01 AM