"Food is Good"--Vichyssoise for Cook The Books: Kitchen Confidential and Souper Sundays 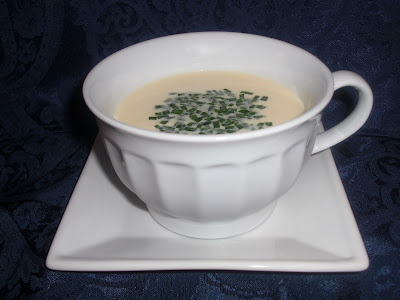 Much as I love to cook, I can say with all confidence, that I will never make my career on the front lines of a restaurant kitchen; frankly, I don't have the chops for it. If only half of Anthony Bourdain's Kitchen Confidential is even slightly true, I wouldn't last a day, so it is good that I can live vicariously by reading through his many adventures, and why I was happy to see Bourdain's brash culinary memoir as our third Cook The Books Foodie Book Club selection. This round of CTB is being hosted by Johanna at Food Junkie Not Junk Food, and she picked Kitchen Confidential to get a macho male perspective on food, after our two slightly more feminine choices! 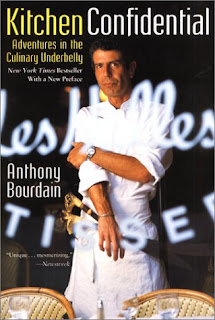 This was my second time reading this book, the first was back when it first came out, before Bourdain became well known for eating beetles, testicles and all manner of bizarre foods while cursing his way all over the world. The book is fascinating, especially for those of us who have never experienced life in the "culinary underbelly". Much like Anthony Bourdain himself, most of the book is rude, crude and socially unacceptable but it (and he), are definitely entertaining and if you have ever harbored fantasies of becoming a famous chef in a top restaurant in New York, you should probably read it just so you can change your career goals. I often find the amount of disdain that Anthony Bourdain dishes out in his books and on his television shows to be a bit much, but then there are the glimmers of his appreciation and feelings for good food, cooked well by people who care about it and it is then that I find myself really warming to him. Buried inside all the bluster and the crusty, cursing exterior beats, (although sometimes faintly), the heart of a fellow food geek who truly loves the whole process and production of making and eating really good food. In my mind this is what takes the book from simply entertaining to worthy of a second reading.
When it came down to deciding what to make to represent the book, I was a bit torn, as this book opens itself up to so many possibilities. I finally decided to pull something straight from the beginning, or "first course" of the book and the aptly titled, "Food is Good" chapter. It is here, as a child, that Bourdain first realizes that food is "something other than substance", on a family vacation to Europe on board the ocean liner, The Queen Mary. Eating his first bowl of Vichyssoise, the first food he really noticed and enjoyed, Bourdain says, "I remember everything about the experience: the way our waiter ladled it from a silver tureen into my bowl; the crunch of the tiny chopped chives he spooned on as a garnish; the rich, creamy taste of leek and potato; the pleasurable shock, the surprise that it was cold." Bourdain goes on to say that the memory of the soup stayed with him, waking up his tongue and taste buds and essentially setting the stage for things to come. (Pretty powerful for a bowl of soup!) 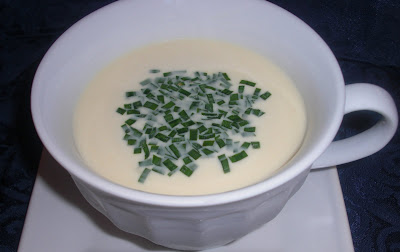 I remember the first time I had vichyssoise, at a little French restaurant for a friend's birthday, back in junior high. I knew what vichyssoise was, but at my house, potato soup was warm and usually came in the form of chowder with bacon and clams. Most of the others there chose the salad for dinner, but being a soup girl even then, I opted for the soup. I remember being impressed with just how much flavor there was in a simple soup and how differently it tasted than the hot soups I was use to. It might not have been the same level of epiphany that Anthony Bourdain experienced but it has stuck with me all these years. A simple, but well-prepared vichyssoise seemed like the perfect dish to make.
My habit lately is to make things healthier, but I pity the person who would dare set a "lite" vichyssoise in front of Bourdain! This one is full-octane in all its butter, milk and cream glory. For a traditional recipe, I went with my New York Times Cookbook, edited by Craig Claiborne and published in 1961, the era of Bourdain's trip. I got this cookbook for $3.00 at a library sale and I love all the classic recipes and the little notes of them like this one on the proper pronunciation of vichyssoise below:
"Someone should start a campaign to instruct Americans that vichyssoise is not pronounced veeshy-swah! Since the creation of the late Loius Diat has become a national favorite, it seems only just that the final consonant be sounded. It is veeshee-swahze." 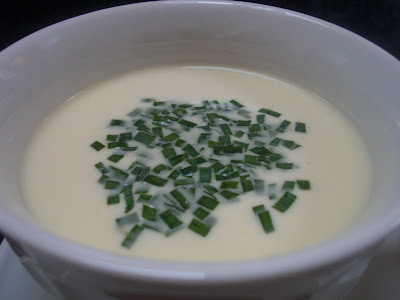 Vichyssoise A La Ritz
The New York Times Cookbook, edited by Craig Claiborne, 1961
(8 or more servings)
4 leeks, white part, sliced
1 medium onion, sliced
1/4 cup sweet butter
5 medium potatoes, thinly sliced
1 quart chicken broth
1 tablespoon or less salt
3 cups milk
2 cups heavy cream
Chopped chives
1. In a deep kettle, brown the leeks and onion very lightly in the butter. Add the potatoes, broth and salt and boil thirty-five minutes, or until very tender. Crush and rub through a fine sieve or puree in an electric blender.
2. Return the sieved mixture to the kettle, add the milk and one cup of the cream and bring to a boil. Cool and rub again through a fine sieve. Chill
3. Add the remaining cream. Chill thoroughly and serve garnished with chives. 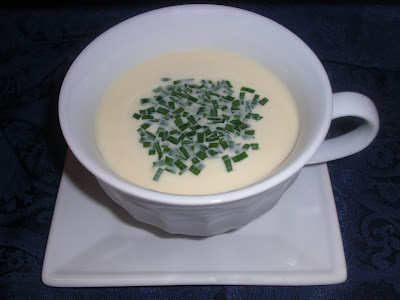 Notes/Results: Crisp, cold and delicious. The flavor of the potato and leek really come through. Even with all the butter and cream, the chilled, silken soup feels light. You absolutely have to have the tiny little bits of chive on top, and for me, a bit of fresh ground pepper makes it perfect. I just made a half batch, since it isn't figure friendly and tried using the sieve method, instead of a blender, just for fun. A bit more effort but the soup was very smooth. A fun, classic soup to make and perfect for spring and summer.

If you want to read along with us at Cook The Books, you have until April 25th to read and post for Kitchen Confidential. You can get all the details at the CTB site, here.

Let's see who made soups for Souper Sunday on this Easter Weekend:
Debby at A Feast for the Eyes is feeling spring and made a Spring Leek and Potato Soup to make good use of the beautiful leeks and garlic in her CSA box. Adapting a recipe from Emeril, made with bacon, white wine and creme fraiche, and kicked up just a bit, Emeril Style, it turned out to be the best potato and leek soup she has made so far! 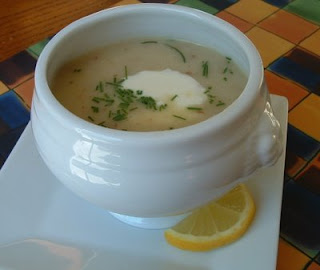 Vacation didn't stop Ulrike from Küchenlatein from submitting her weekly soup, this one is a Ramson Soup. If you are not familiar with ramsons, they are wild garlic, or bear garlic and a wild cousin to chives. Ulrike has some coming up in her garden, where the picture was taken, and with some onions, potatoes and stock, they made a gorgeous soup. 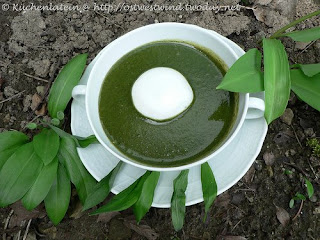 A big welcome to a new face at Souper Sunday, Nurit from 1. family. friendly. food., hailing from Seattle. Nurit welcomed spring with a lovely green Peas and Tarragon Soup that she adapted from a Bon Appetit recipe. Nurit says the soup is both "wonderful" and "so quick and easy to make" and we are happy to have both her and the soup with us this week! 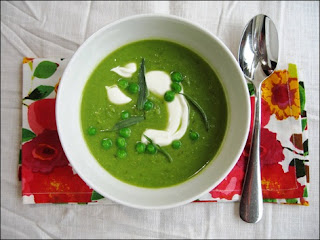 Kim at Ordinary Recipes Made Gourmet is spicing up the sweet potatoes this week with her Sweet Potato Soup with Chili Mango Salsa. Trying to lighten up her diet for spring and deciding she should enjoy the health benefits of these tubers year round, she searched her recipe box and found this soup. Kim says this soup is "thick and good but yet surprisingly light", and the spicy salsa on top adds an extra fun touch. 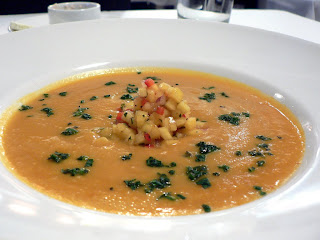 A new tabletop light studio from her husband and her special reserve of dried porcini mushrooms were the inspiration for Kait from Pots and Plots to make this rich, velvety Three Mushroom Soup. Made with the porcini, along with dried shitakes and some fresh creminis, she lightened it up the normal cream a bit with some fat-free half and half. Yum! 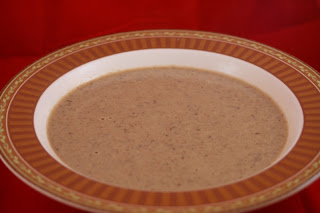 From her post about cataloguing cookbooks, I think Christine from Kits Chow has as many cookbooks as I do. She adapted this recipe for Irish Stew from one by Marion Cunningham's, The Supper Book. Christine found that this dish lived up to Marion's claims that it has the "taste of the land--natural and inviting". She says this is an excellent stew. 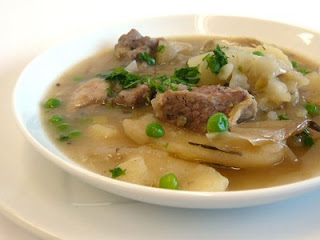 Debbie from The Friday Friends says she wasn't sure whether her Seafood Soup was actually a soup, stew or chowder, so she did a little research on the subject and decided it is a soup and a delicious one at that! The recipe for this chiopino style dish came from her "oldest and dearest friend", and it is so good that it has made Debbie famous among her neighbors and fellow soup lovers! 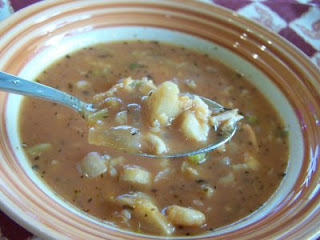 There is nothing like a simple bowl of chicken soup to cure whatever ails you. When a bout of flu went through her house, Natashya from Living in the Kitchen with Puppies headed straight for the kitchen "medicine cabinet" to make this Easy-Peasy, Lemon-Squeezy, One Pot Chicken Noodle Soup. Made with plenty of garlic and lemon and served with homemade bread, it quickly had everyone feeling better again. 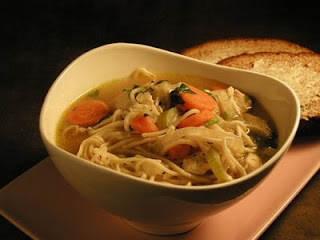 More wonderful soups to celebrate spring with! Thanks to everyone who joined us at Souper Sunday this week. If you want to share a soup or soup-like creation, click the Souper Sunday logo on the side bar for all the details.
Have a Happy Easter!
Posted by Deb in Hawaii at 12:15 PM