The Book Tour Stops Here: A Review of "Daughter of Black Lake" by Cathy Marie Buchanan, Served with a Recipe for Warm Barley Salad with Herb Pesto

Happy Thursday! I am so looking forward to the weekend, but first I have the pleasure of being today's stop on the TLC Book Tour for Daughter of Black Lake by Cathy Marie Buchanan. Accompanying my review of this gorgeous fantasy novel is an excerpt from the book and a recipe for Warm Barley Salad with Herb Pesto, a dish inspired by my reading. 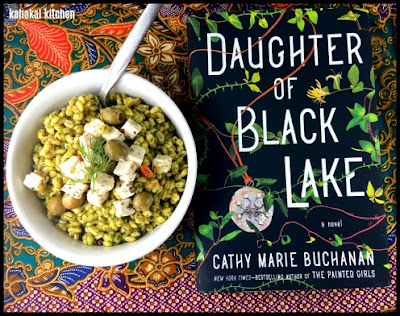 In a world of pagan traditions and deeply rooted love, a girl in jeopardy must save her family and community. A transporting historical novel by New York Times-bestselling author Cathy Marie Buchanan.

It’s the season of Fallow, in the era of iron. In a northern misty bog surrounded by woodlands and wheat fields, a settlement lies far beyond the reach of the Romans invading hundreds of miles to the southeast. Here, life is simple–or so it seems to the tightly knit community. Sow. Reap. Honor Mother Earth, who will provide at harvest time. A girl named Devout comes of age, sweetly flirting with the young man she’s tilled alongside all her life, and envisions a future of love and abundance. Seventeen years later, though, the settlement is a changed place. Famine has brought struggle, and outsiders, with their foreign ways and military might, have arrived at the doorstep. For Devout’s young daughter, life is more troubled than her mother ever anticipated. But this girl has an extraordinary gift. As worlds collide and peril threatens, it will be up to her to save her family and community.

Set in a time long forgotten, Daughter of Black Lake brings the ancient world to life and introduces us to an unforgettable family facing an unimaginable trial. 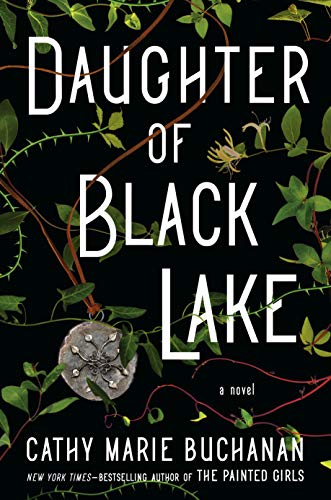 I don't read a lot of fantasy as a rule but something about Daughter of Black Lake pretty much enthralled me from the start--actually from receiving my copy with its gorgeous cover. The author immediately had me caught up in the world of bog dwellers in first-century Britannia. I could picture life at Black Lake and    The story is told by Hobble, a young field hand, and her mother, Devout in a time and place where people often got their names from their features or their talents, qualities or work. Devout was given her name for her devotion to Mother Earth and Hobble has a limp. Her father is Smith, a blacksmith. They live a hard scrabble life in a remote settlement, very much tied to the earth with Pagan rituals and belief in magic. Roman soldiers conquered Britain seventeen years prior, and their relationship with the Druids and village communities is an uneasy one. Hobble is a Seer and her gift is what keeps her safe as ancient rituals favor the sacrificing of the runts or weak ones--both animals and people, to appease their deities. Hobble is thirteen and narrates the present day chapters of the novel while Devout tells of her girlhood fourteen years prior.

I ended up enjoying both characters although it took me longer to warm up to Devout because I wasn't pleased with how she kept her distance from her husband, her second mate, after her first love is killed by the Romans. I felt like some of her choices were selfish and self-serving although the love and care she has for Hobble made up for that. The drama comes both from the Roman soldiers Hobble sees in a vision, and a ruthless Druid who arrives at Black Lake determined to incite the settlement into a revolution against the Romans. There is drama and magic and secrets and although the detailed world building slowed down the story in the beginning, it picked up pace and had me not wanting to put the book down.

I don't think you need to be a fantasy fan to love this book--an appreciation for history and ancient lore is helpful, but at it's heart, Daughter of Black Lake is a story about a mother and a daughter, and a girl coming of age in a often dark and brutal time. It is evocative and atmospheric, and a great October read with Samhain and Halloween around the corner. It's a great curl up on a rainy day and lose yourself kind of book. (Check out the book excerpt below for a glimpse of the story.)

Author Notes: Cathy Marie Buchanan’s previous novels, The Painted Girls and The Day the Falls Stood Still, were both New York Times bestsellers, with The Painted Girls named a best book of the year by NPR, Good Housekeeping, and Goodreads. Buchanan’s work has been translated into nine languages. She lives in Toronto. 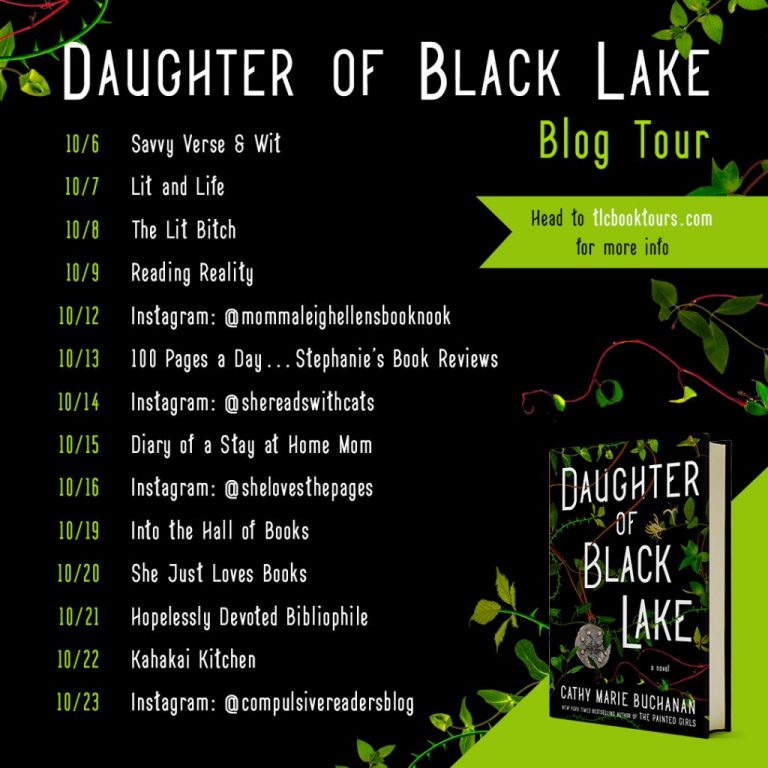 This book tour features progressive excerpts from the book. I have the last excerpt, #10 and you can find excerpt #9 at Hopelessly Devoted Bibliophile. Here is the complete list of excerpts and bloggers.

Once he was gone, she slumped onto the trunk of a fallen beech. Had Young Smith set her reeling in quite the same way? Was that reasonable to ask when, as far back as she could remember, she had toiled in the fields with Arc? She knew she was prideful, aspiring. With the amulet on her palm, she had been uncharitable toward Reddish, jealous in truth. Was it only pride that had driven her to so recklessly want the amulet, to desire Young Smith? She sat there, stroking leaf litter and decay. She whispered to Mother Earth, promising humility and the amulet returned to Young Smith until she better understood her mind.

She turned her thoughts to the words she would speak to Young Smith and reached into the pocket of her cape, anticipating the craftsmanship, the grace. Her fingers felt only hide, the threads holding the pocket in place. She probed each corner, the emptiness. She held open the pocket and looked, but the amulet was not there. She fell to her hands and knees, hunting among leaf litter as the sun fell lower still, and then grazed the horizon. She galloped down the steep slope of Edge—feet flying, stumbling, catching herself. At the place where Young Smith had given her the amulet, she dropped again to her knees and searched until the sun was gone, until there was scarcely time to make it back to the clearing and begin the collection rounds with the other maidens—her hair dull and tangled, her skin ripe with the odor of panic and toil.

She wept, face in her hands, but only for a moment. Then she wept as she ran through the woodland and then across the clearing to her roundhouse and the fresh, sweet scent of the rushes newly laid over the earthen floor, spread there in deference to Mother Earth.

What would Devout say to Young Smith? How would she ex‑ plain the cross that did not rest against her throat, that she had not returned to him? Oh, how he would despise her, she who had lost his prize. 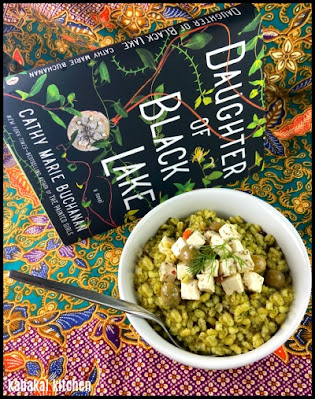 So it seemed like barley needed to be a part of my bookish dish whatever I did and I had a half-package of pearled barley in my pantry. (Likely the barley mentioned in the book would have been the whole-grained whole but needs must & convenience must. ;-) Sometimes I can find locally grown sorrel, but never when I am looking for it so I decided to dress my warm barley (cooked in broth, dried shallots and garlic cloves) with a pesto of mixed herbs and plenty of olive oil (a luxury the Romans brought and a small vessel of it was smuggled into the settlement by Hobble). Since both hard and soft cheese were mentioned--sometimes flavored with herbs, I garnished my barley with a mix of marinated feta and olives that I got at Whole Foods. Not necessarily a perfect match to the food in the book, but a good nod to it and the pretty green color makes it a match for the beautiful green on the cover. 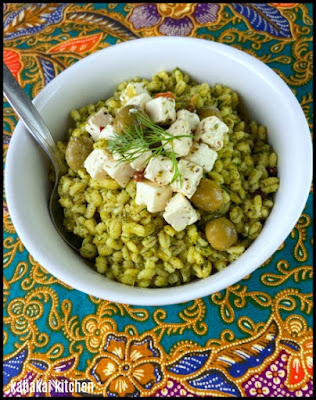 Warm Barley Salad with Herb Pesto
By Deb, Kahakai Kitchen
(Serves 4 as a side, 2 as a main)

2 Tbsp dried shallot or fresh will work too

1 heaping cup chopped mixed herbs of choice (I used parsley, dill, chives, thyme and the leaves from one sprig of rosemary)

juice of one lemon

Bring broth to a boil over high heat.  Add dried shallots and garlic and a large pinch of salt. Reduce heat to medium-low, cover, and cook until barley is tender, about 20-25 minutes. Drain any excess liquid away and set aside, covered to keep warm.

Add the olive oil, herbs, lemon juice, sea salt and black pepper to a food processor and process until a coarse pesto. Add additional olive oil as needed to make it a dressing-like consistency. Taste and add additional salt, pepper, and lemon juice as needed.

Stir the pesto into the warm barley. Taste and adjust seasoning as desired. Serve warm, topped with a drizzle of oil oil and cheese cubes (I used feta) and olives or capers if desired. Enjoy! 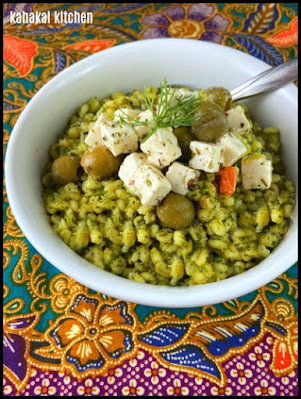 Notes/Results: I forget sometimes just how good a bowl of grains can be--epecially with all of the herbs and the lemon adding so much flavor to the mix.(Not to mention the salty feta & briny olives on top!) I really love the toothsome barley--it so good and chewy. I ate a big bowl for lunch and may make a grain bowl with the leftovers for tomorrow. This was a great way to use up random herbs my fridge and I would happily make it again. 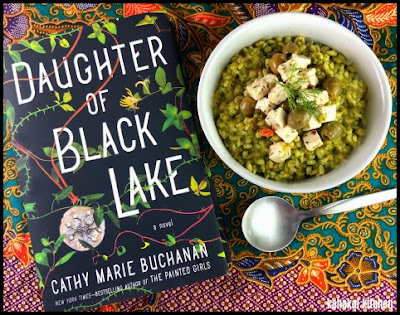 I'm linking up to Souper Sundays here at Kahakai Kitchen where we highlight soups, salads and sandwiches from bloggers who join in. Here's the link to this week's link up post. 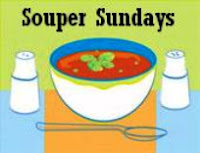 I'm also sharing this post with the Weekend Cooking event  being hosted by Marg at The Adventures of An Intrepid Reader. It's a weekly event that is open to anyone who has any kind of food-related post to share. Here's the link to this week's post.

Note: A review copy of "Daughter of Black Lake" was provided to me by the author and the publisher via TLC Book Tours. I was not compensated for my review and as always, my thoughts and opinions are my own.