The Book Tour Stops Here: A Review of "I Know You Know" by Gilly Macmillan, Served with Baked Beans on Toast with Smoked Cheddar

It’s Thursday and so, one day closer to the weekend—always a good thing. Another good thing is being on a TLC Book Tour for a mystery-thriller like I Know You Know by Gilly Macmillan. Accompanying my review is a simple weeknight comfort food meal of Baked Beans and Toast, inspired by my reading. 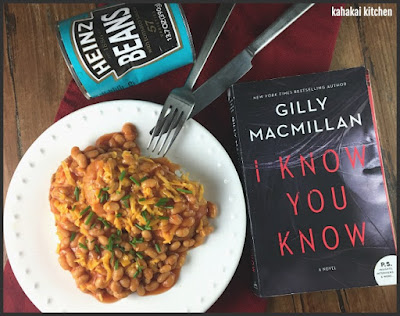 Publisher’s Blurb
From New York Times bestselling author Gilly Macmillan comes this original, chilling and twisty mystery about two shocking murder cases twenty years apart, and the threads that bind them.
Twenty years ago, eleven-year-olds Charlie Paige and Scott Ashby were murdered in the city of Bristol, their bodies dumped near a dog racing track. A man was convicted of the brutal crime, but decades later, questions still linger.
For his whole life, filmmaker Cody Swift has been haunted by the deaths of his childhood best friends. The loose ends of the police investigation consume him so much that he decides to return to Bristol in search of answers. Hoping to uncover new evidence, and to encourage those who may be keeping long-buried secrets to speak up, Cody starts a podcast to record his findings. But there are many people who don’t want the case—along with old wounds—reopened so many years after the tragedy, especially Charlie’s mother, Jess, who decides to take matters into her own hands.
When a long-dead body is found in the same location the boys were left decades before, the disturbing discovery launches another murder investigation. Now Detective John Fletcher, the investigator on the original case, must reopen his dusty files and decide if the two murders are linked. With his career at risk, the clock is ticking and lives are in jeopardy… 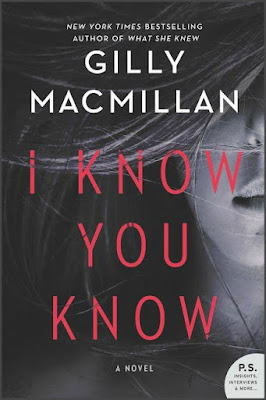 I Know You Know is the third of Macmillan’s books that I have read. I reviewed The Perfect Girl (review here) and followed that up with her first book, What She Knew on my Kindle, and then I do have her Odd Child Out sitting in my #TBR stack and mean to get to it soon. I like the twists and turns her books take and I Know You Know is no exception. Podcast, especially true-crime podcasts have increased in popularity the past couple of years and I like how the book centers around a podcast that is hosted by man whose two best friends were killed twenty years ago, when the three were children together in a housing division in Bristol, England.
Cody Swift has reason to believe that the mentally-challenged man who was convicted of murdering his friends, may have been innocent and is willing to uncover a lot of buried secrets that many do not want uncovered—including the boys’ families, the investigator on the case—who happens to have been called to the scene where the boys were found when a new body, from the same era is uncovered, and of course the person who is actually guilty of the crime.
Macmillan weaves the past and present together well through the podcasts, the differing viewpoints and memories of those involved, and the investigation of the current case. There were some interesting turns that kept me guessing and I didn't have it all figured out in the end--something I always appreciate in a thriller. I really enjoyed I Know You Know and I look forward to more of Macmillan's work.
-----

Author Notes: Gilly Macmillan is the Edgar Nominated and New York Times bestselling author of What She Knew. She grew up in Swindon, Wiltshire and lived in Northern California in her late teens. She worked at The Burlington Magazine and the Hayward Gallery before starting a family. Since then she’s worked a sa part-time lecturer in photography, and now writes full-time. She resides in Bristol, England.
Find out more about Gilly at her website, and connect with her on Facebook, Instagram, and Twitter.
----- 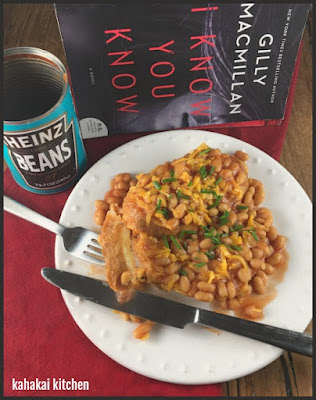 For my book-inspired dish I took the baked beans on toast that Detective John Fletcher eats at his table and later on, sees he left a pan of burned beans on the table. I had to assume he used Heinz 57 Beans which seems to be the standard when one looks online for British beans on toast. The gourmet section of my local grocery store has imported canned goods and I always see the blue cans of beans there. When I went to buy one there was one lonely and dented can on the shelf. I figured it mirrors the sad state of Fletcher's apartment and life. I picked up a small piece of smoky cheddar cheese and some chives to give it a little extra something and served it on leftover sourdough. And, I kept my beans not burned. ;-) 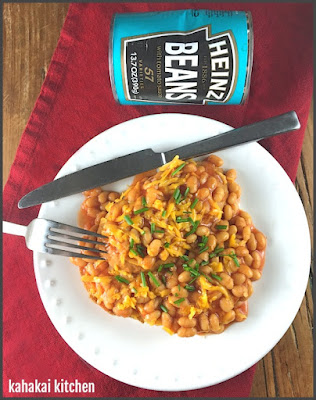 This is not a recipe  as I simply opened a can of Heinz 57 Beans and heated them up, toasted a couple of pieces of sourdough bread, covered them with the grated smoky cheddar cheese, and spooned the hot beans on top. Pretty simple for a busy weeknight. I garnished the top with a bit more of the cheese and some chopped chives. If you can't find the Heinz 57 Beans, there are lots of recipes online for British-style baked beans or you could use the American kind. 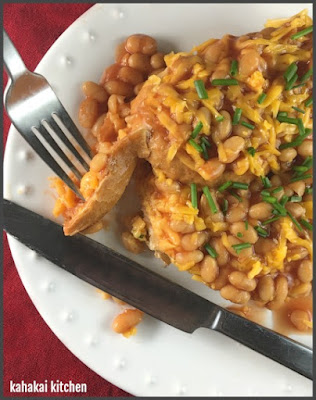 Notes/Results: The beans themselves are a tad sweet for me (I'm not the biggest fan of any baked beans actually) but the smoky cheddar I grated on top of the toast help lessen the sweetness and they were actually tasty and a pretty good weeknight dinner. I think they might be even better with a runny-yolked egg on top. I might try my leftover beans that way. ;-) I'm glad I finally tried the Heinz 57 Beans too--just for fun. 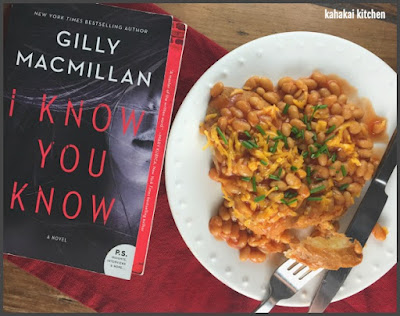 Note: A review copy of "I Know You Know" was provided to me by the author and the publisher, Harper Collins, via TLC Book Tours. I was not compensated for this review and as always, my thoughts and opinions are my own.