On today's TLC Book Tour stop I am reviewing Trigger Warning: Short Fictions and Disturbances by Neil Gaiman. Along with my review comes a recipe for a scrumptious Roasted Red Pepper & Feta Hummus inspired by the book. How does a fantasy fiction anthology inspire hummus? You'll just have to read the post to find out. 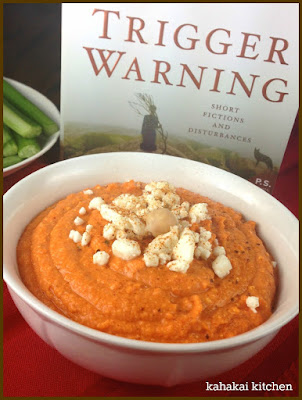 From one of the most critically acclaimed and beloved storytellers of our time comes a major new collection of stories and verse.

“We each have our little triggers . . . things that wait for us in the dark corridors of our lives.” So says Neil Gaiman in his introduction to Trigger Warning, a remarkable compendium of twenty-five stories and poems that explore the transformative power of imagination.

In “Adventure Story”—a thematic companion to the #1 New York Times bestselling novel The Ocean at the End of the Lane—Gaiman ponders death and the ways in which people take their stories with them when they die. “A Calendar of Tales” is comprised of short pieces about the months of the year—stories of pirates and March winds, an igloo made of books, and a Mother’s Day card that portends disturbances in the universe. Gaiman offers his own ingenious spin on Sherlock Holmes in his award-nominated mystery tale “The Case of Death and Honey.” Also included is “Nothing O’Clock,” a very special Doctor Who story that was written for the beloved series in 2013, as well as the never-before-published “Black Dog,” a haunting new tale that revisits the world of American Gods as Shadow Moon stops in at a village pub on his way back to America.

Gaiman, a sophisticated writer whose creative genius is unparalleled, entrances with his literary alchemy and transports us deep into an undiscovered country where the fantastical becomes real and the everyday is incandescent. Replete with wonder and terror, surprises and amusements, Trigger Warning is a treasury of literary delights that engage the mind, stir the heart, and shake the soul. 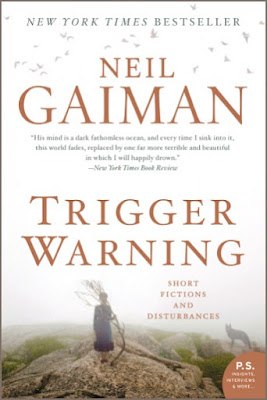 I have not read a lot of Neil Gaiman's work outside of Coraline, his young adult fantasy/horror tale, and the assorted short story by him in other collections. I was intrigued by the description of Trigger Warning and having good luck lately with short story collections, I thought that it was a great way to get better acquainted with Gaiman's writing. If you spend any time browsing books and looking at reviews on Amazon you are familiar with trigger warnings--statements that warn a reader that a book contains material that may trigger reactions in certain readers based on past experiences or things that make them uncomfortable. It makes a great title for a book and I liked what Gaiman said in the introduction; "There are things in this book, as in life, that might upset you. There is death and pain in here, tears and discomfort, violence of all kinds, cruelty, even abuse. There is kindness, too, I hope, sometimes. Even a handful of happy endings. (Few stories end unhappily for all participants, after all.)"

I love that Gaiman included the inspiration for, or something about the background of each story and poem in his introduction. I did not read the story intros ahead of time but found myself going back to them after I completed each piece to learn more about what I read. This was especially helpful for his A Calendar of Tales, with short bites for each month of the year. I was trying to figure out how the stories were related before reading his intro and finding out that they were written in response to a social media experiment, based on replies to questions he tweeted out. Now it made sense. Some month's tales were stronger than others, but I thought the whole concept was very cool. My favorite piece in the book was the very short, but deliciously creepy Click-Clack the Rattlebag. It has all the scary triggers--large old house, intense precocious child, dark night with the lights going out, and especially Click-Clacks, who according to the child "are the best monsters ever" and much scarier than vampires. Perfect! I also really enjoyed Orange (Third Subject's Response to Investigator's Written Questionnaire) which was unique in its format, as well as darkly humorous. Other standouts for me included The Thing About Cassandra which had an interesting take on an imaginary teen-age girlfriend coming to life years later and Black Dog (which apparently is based on a character from his book American Gods but stands on its own) where an American traveler stops in a rural British pub and makes some interesting acquaintances. The quirky And Weep, Like Alexander was fun with its "un-inventor" Obediah Polknghorn, and I liked the imagery of the scarlet mulberries and the clocks that "whispered time" in Witch Work, one of the handful of poems in the book. Finally, I found The Man Who Forgot Ray Bradbury (written by Gaiman for the late author's ninetieth-birthday) about a man who is losing his memory, to be especially poignant. In addition to the Bradbury story there are other pieces based on well-known names; Sherlock Holmes in The Case of Death and Honey and Dr. Who in Nothing O'Clock. Although I am not a huge reader or watcher of either character, the stories involving them were interesting and well-written. I am sure true fans of both will be pleased.

There are 24 stories or poems in the book, and as always happens in collections like this, some were hits for me and some were misses--but each story, regardless of how much I liked it made me stop and wonder a bit and sometimes scratch my head. Trigger Warning is a great book to delve into, a story or two at a time. Maybe it's not bedside reading if you have a lot of triggers or don't like thinking about things that are often creepy and slightly disturbing before you go to sleep, but nonetheless, it's a little box full of odd  treasures to savor. I really enjoyed it and will continue to explore more of Gaiman's writing.

Author Notes: Neil Gaiman is the #1 New York Times bestselling author of more than twenty books, and is the recipient of numerous literary honors. Originally from England, he now lives in America.

So, as you can imagine, this anthology is not at all food focused--although there were some mentions--like rosemary bushes in a labyrinth, that when burned were reminiscent of roasted lamb, or oat porridge, trout and whiskey. There was mention of unpleasant breakfasts of "oily eggs, leathery sausages, a baked orange sludge of beans" and Stuffed Muffins--including "The Complete Turkey Dinner Christmas Stuffed Muffin" and hot cocoa and Marmite and cucumber sandwiches, and a recipe for old-fashioned cheesecake that appears in a dream.

But it was the mentions of a Mediterranean mezze plate with dolmades and hummus in Cassandra, and then more hummus (made for a genie) in the October Tale of The Calendar of Tales that ultimately became my book-inspired dish. I like to make a batch of hummus on the weekend so I can pull it out to nosh on during the week--just like having Trigger Warning on my nightstand, ready to pull out and read a story or poem when I was hungry for something a little different. 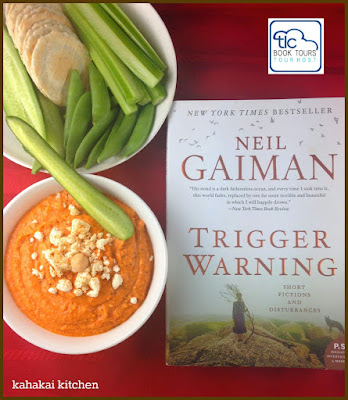 I make a lot of hummus. Usually my basic hummus, or sometimes adding some Old Bay Seasoning to change things up. For this version, I wanted something different from my norm to match this collection of unique stories and poems. I also wanted to use up some leftover feta and roasted red peppers I had on hand, so I blended it all together. 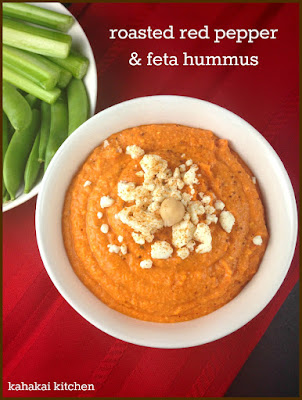 Place in serving bowl and top with extra feta and a sprinkle of smoked paprika. Serve with veggies of choice, crackers and/or bread. 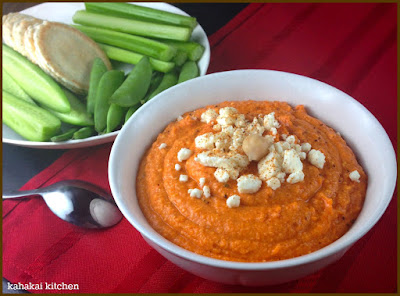 Notes/Results: Creamy, cheesy hummusy goodness, this hummus has great flavor with the salty feta, slightly sweet red pepper, and the bright acidity from the lemon. (I like the bright color too.) ;-) Lately I have been adding a touch of sesame oil to my hummus along with the tahini--I think it adds another layer of flavor. This was good with the crunchy green veggies and the rosemary wafers I paired it with. A good addition to my hummus repertoire, I will make it again. 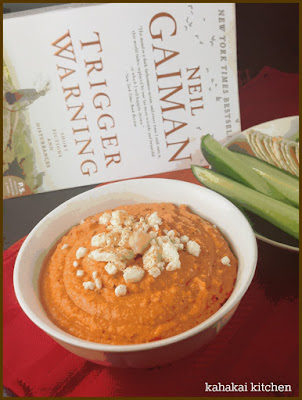 Note: A review copy of "Trigger Warning" was provided to me by the publisher and TLC Book Tours in return for a fair and honest review. I was not compensated for this review and as always my thoughts and opinions are my own.