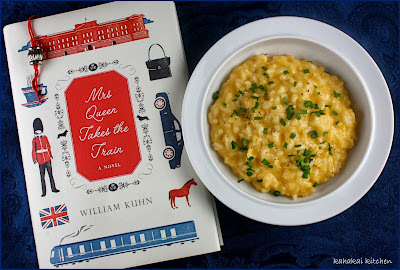 Bored, possibly depressed, and in the midst of a bit of a "later-in-life crisis," Queen Elizabeth escapes the palace for a little adventure in Mrs. Queen Takes the Train, an entertaining novel by William Kuhn. Incognito in a borrowed navy hoodie (a skull and crossbones grace the back), she slips away to buy some more cheese for her horse and spontaneously ends up on a train headed to Scotland to see the former royal yacht, moored near Edinburgh. It's up to an eclectic group of palace employees along with an unpublished poet/cheese monger/occasional paparazzo to band together to get her back before anything happens to her and before anyone finds out. 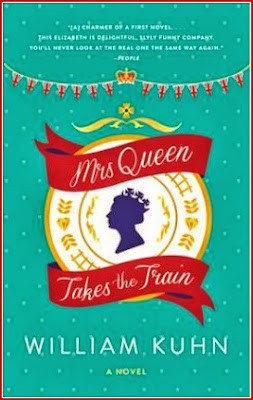 Mrs. Queen Takes the Train is a fun and intriguing book--one part history lesson on Britain and the monarchy, and one part fanciful fairytale. It makes The Queen (one must always use capital when referring to Her Majesty) almost human. Who knew the slightly snarky sense of humor under all of those stuffy layers? It's a joy to watch to watch "Little Bit" as she refers to herself, navigate modern times in the real world. Prince Edward has managed to get her into yoga (each chapter is named after a yoga pose), and the wonders of the Internet--although she is challenged figuring out 'Mr. Google' and 'Miss Twitter'--names she feels "seemed to have been invented for a nursery story." We get to learn the back stories and details of the current lives of the main supporting characters racing to bring her home--The Queen's lady-in-waiting, her senior dresser, the butler, an equerry (a military officer attending the royal household), a stable girl, and the aforementioned clerk from the shop that supplies her cheese. They provide an interesting look at the hierarchy and formality that exists "downstairs" at the palace. Kuhn's background as a historian is fully used here but he writes in such a witty way and with enough heart to keep it all interesting and the book's action flowing along well.

I found myself wanting to hang out and have a drink with The Queen (she is partial to gin and old fashioned English martinis--"two parts Dubonnet, two parts gin and a bit of lemon peel. All mixed up together. On ice."), and maybe even dare to give her a quick hug. I thoroughly enjoyed this romp through Britain that kept me chuckling. Mrs. Queen Takes the Train will appeal to anglophiles, fans of The Royal Family, and anyone who likes a smart, cozy and enjoyable read.

Author Notes: William Kuhn is a biographer and historian, and the author of Reading Jackie, Democratic Royalism, Henry & Mary Ponsonby, and The Politics of Pleasure. He lives in Boston, Massachusetts. This is his first novel. His next book, a work of historical fiction, explores the friendship over nearly forty years of Isabella Stewart Gardner and John Singer Sargent. 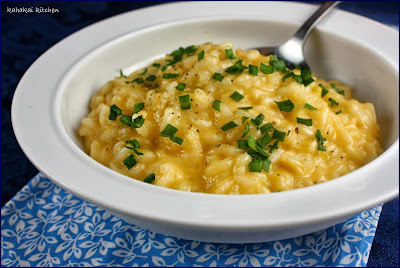 For my dish inspired by the book, I knew it had to include cheddar cheese in honor of Mrs. Queen and her beloved Elizabeth, the cheese-loving horse that shares her name. I thought of going with a Welsh Rarebit--which The Queen was happy to see on the train buffet, but not too long ago I posted Nigel Slater's gooey Hot Cheese Muffins for Food 'N Flix's viewing of Toast and wanted something a bit different. I ended up looking up recipes with cheddar from British chefs and when Nigella Lawson's decadent Cheddar Cheese Risotto came up, I was sold. I figure it is a more "queenly" take on a comforting mac 'n cheese and I have a container of aborio rice in the pantry that needs using up. This is not a healthy dish by any means but its homey feel makes it perfect for a curl-up-with-a-cup-of-tea book like Mrs. Queen Takes the Train.

Nigella says, "This might seem odd to Italians but it works beautifully: the starchy rice, the sharp Cheddar, both are the perfect counterpoint for each other. I make this on days when I need to escape to the kitchen and have a good, quiet, relaxing and mindless 20 minutes staring into the middle distance and stirring. I heartily recommend it." 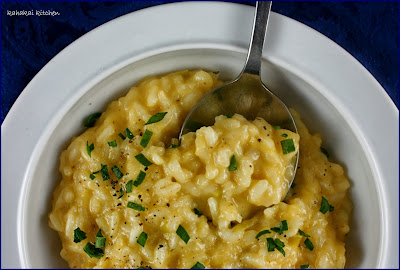 Melt the butter and oil in a medium-sized pan and cook the sliced baby leeks until they have softened. Add the risotto rice and keep stirring for a minute or so, then turn up the heat and add the wine and mustard, stirring until the wine is absorbed.

Start ladling in the hot stock, letting each ladleful become absorbed as you stir, before adding the next one. Stir and ladle until the rice is al dente, about 18 minutes, then add the cheese, stirring it into the rice until it melts.

Take the pan straight off the heat, still stirring as you do so, and spoon the risotto into warmed dishes, sprinkling with some of the chopped chives.

Additional information - for vegetarians make sure that the cheese is a brand that doesn't contain animal rennet. 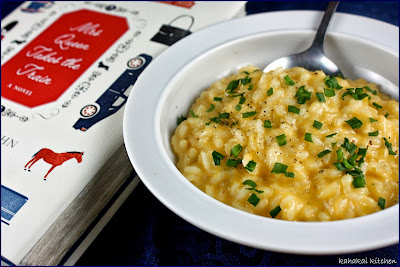 Notes/Results: Cheesy comfort food--what's not to like?!? The leeks, wine and chives on top keep this from being too cheesy (is there even such a thing?!), but it is mighty rich and  a small portion goes a long way. Mine took about 5 cups of veggie broth/water and about 23 minutes to get it to the right consistency of creamy but slightly firm. Like Nigella, I find the time spent over the stove, waiting for the rice to make its magic to be relaxing so a few extra minutes is fine by me. I think that if Mrs. Queen had eaten this for lunch instead of her "solitary Monday lunch" of "A single lamb chop with a thimble full of mint jelly. Three Brussels sprouts. A steamed carrot.  A glass of burgundy."--she would have been full, happy, and in a better frame of mind. Or at least been in a bit of a food coma so she would never have left the palace that day! Nigella certainly does comfort meals well--this is simple, gooey and good and I would make it again. 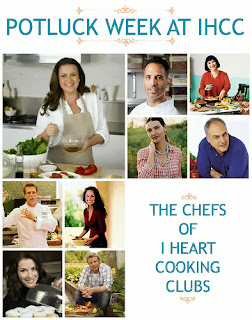 In addition to the TLC Book Tour, I am linking this Nigella dish up to I Heart Cooking Clubs Potluck week, where the recipes of all previous IHCC chefs are welcome. Stop by and check out all the yummy dishes.

Note: A review copy of "Mrs. Queen Takes the Train" was provided by the publisher and TLC Book Tours in return for a fair and honest review. I was not compensated for this review and as always my thoughts and opinions are my own.