I have to confess that I have yet to read the novel, The Help by Kathryn Stockett. I have meant to read it ever since it was published and especially before the movie  came out but for some reason or another it never happened. So I can't enter into the usual debate of which is better, book or movie. I am going to assume that as usual, the book wins. Which in this case would make it an excellent book because the movie is quite good. 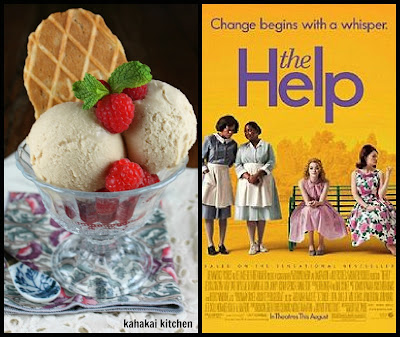 I have seen the film a few times and I was happy to watch it again when Glennis of Can't Believe We Ate picked the film version of The Help for our Food 'N Flix movie for August. The story of not-so-conventional Southern belle and budding writer Eugenia ("Skeeter" ), who returns home from her university graduation and finds that she isn't comfortable with the racist attitudes of her friends and family. She pitches a book, based on the perspective of "the help" to a New York editor. The book chronicles the lives of the black housekeepers and maids who spend their lives taking care of white families and raising the children. Skeeter solicits the help of her friend's maid Aibileen and Aibileen's friend Minnie to write her expose which has huge effects on Skeeter, the maids who give her their stories, and the entire community. The acting is excellent--Viola Davis, Octavia Spencer, Emma Stone, Bryce Dallas Howard, Allison Janney, Sissy Spacek to name a few. The movie puts the viewer through the gamut of emotions--laughter, tears, anger, and of course, in keeping with the Food 'N Flix mantra, there is plenty of tasty food and Southern cooking to behold. 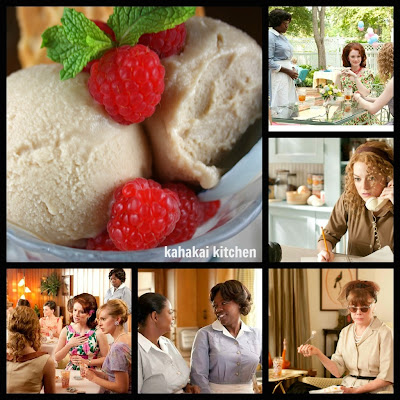 After seeing the many glasses of iced sweet tea consumed throughout the movie, I knew I wanted to make something featuring this Southern staple. I have made a lot of tea sorbets  and granitas lately, but I wanted something creamer and decided to go with ice cream, but a non-dairy version. Looking for a recipe as a starting point I googled "vegan sweet tea ice cream" and found this Sweet Tea Ice Cream recipe from Wheeler's Frozen Dessert at Madcap Cupcake. Turns out it was the perfect recipe and it produced non-dairy ice cream that is among the creamiest and best I have ever had. It tastes like pure indulgence and would be a perfect dessert for a Southern-style bridge party on a warm day. 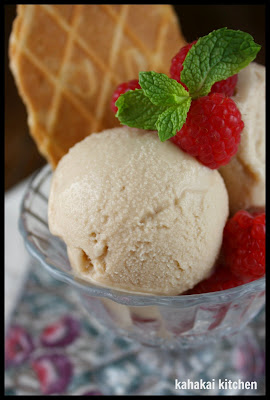 Notes/Results: I made a few small changes based on what I had on hand--using a coconut flavored black tea, vanilla almond milk, and cornstarch instead of arrowroot to thicken the mixture. The result--creamy, sweet but not overpowering, with a lovely tea flavor. I originally added the raspberries to perk up the weak tea-colored ice cream for photos, but they pair so well with it that I would recommend serving this ice cream with fresh berries and a buttery cookie crisp. 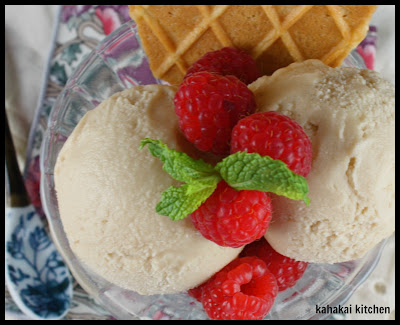 Thanks to Glennis for a great summer movie pick. The deadline for this month's Food 'N Flix entries is August 30th. If you missed out this round and you love movies and food, consider joining in for September's film, It's Complicated, hosted at Beyond the Peel.