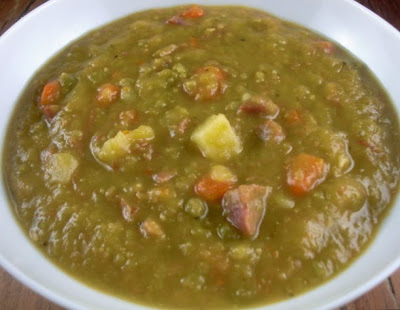 I was all set top make a squash soup this week but the weather got gray and drizzly and a Chunky Split Pea Soup got into my head somehow and wouldn't leave. I just kept thinking about a bowl of this chunky, savory goodness so I switched my plans and here we are. There are differing views on split pea soup--some like it, some people (like my sister) hate all things peas and think of it as mush. Some purée their split pea soup until completely smooth, others don't blend it at all. It can be vegetarian or with chunks of ham. For me, I want it just slightly puréed with nice chunky pieces of potato, carrot, celery and smoked ham hock left in. Oh yes, the smoked ham hocks--for me a necessary part of my split pea experience both for the delicious broth they make and for the little pieces of smoky meat throughout the soup. So necessary that I almost abandoned my plans when the three stores near me were out of them. I finally found a largish smoked shank that worked just fine. If you cook the hocks or shanks the night before making the soup and put the stock in the fridge overnight, you can remove the thickened layer of fat from the top of the soup and get great flavor and a leaner, less greasy soup--well worth the extra effort. 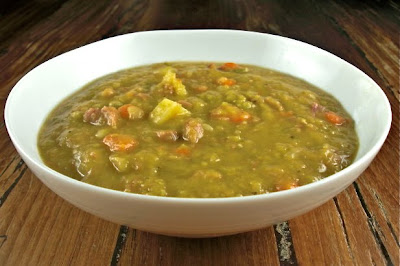 Chunky Split Pea Soup
by Deb, Kahakai Kitchen
(Makes about 10 cups)
2-3 smoked ham hock or 1 large smoked ham shank (see instructions below for ham stock)
2 Tbsp olive oil
1 large onion, finely diced
2 celery stalks, diced
3 carrots, diced
3 cloves garlic, minced
1-pound bag (or about 2 heaping cups) split peas, rinsed and picked through
2 bay leaves
3 sprigs fresh thyme
3 quarts mixed ham and chicken stock (or stock of choice)
2 Yukon gold potatoes, diced
2 tsp smoked or hot paprika or combination
Salt and freshly ground black pepper to taste
For Ham Stock (Prepare the day before): Place the ham hocks or shank in a large kettle add 3 quarts of water. Bring to a boil, reduce heat and simmer covered for about an hour or until shank is tender. Strain broth into a container, setting aside meat to cool, and place container in the fridge overnight. When meat has cooled pull from the bones, dice and refrigerate. After stock has set overnight, remove the hard layer of fat and use stock in soup.

In a large saucepan or Dutch oven, saute onion, celery and carrots in olive oil over medium-high heat for about 5 minutes, until they begin to soften. Add garlic and continue sauteeing another 2-3 minutes. Add dried peas, bay leaves, thyme and stock. Bring to a simmer and cook about 30 minutes, then add potatoes and cook another 30 minutes or until soup is thick, potatoes are soft and peas have almost but not quite disintegrated. Add ham meat and paprika and cook another 10 minutes. Remove bay leaves and thyme stems and season, to taste, with salt and pepper. Purée very lightly with immersion blender or puree a couple of cups of the soup in the blender, so that soup remains very chunky. Serve with a good piece of whole grain bread. 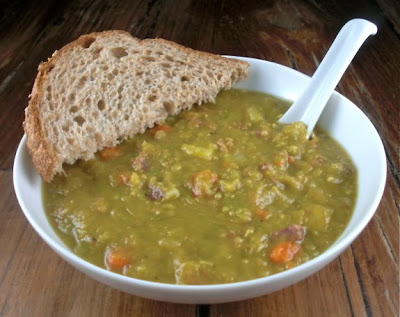 Notes/Results: So delicious and it really hit the spot. Pea soup doesn't look glamorous, it is a humble but very yummy bowl of soup. You can certainly make it vegetarian and leave out the ham hocks and still get a great soup but there is something about the richness of the ham broth, (I combine the ham stock with my homemade chicken stock), that adds so much flavor. The paprika adds even another layer of smokiness, I use a combination of hot and smoked but you can just use whatever kind you have available. Potatoes are optional, sometimes I leave them out, but they make it even more thick and hearty. With the cooked split peas thickening the broth, the soup is quite thick before blending but I like the combination of the blended soup and the chunks of veggies so I pass my immersion blender through it just a couple of times. The perfect soup for a cold rainy day.

Let's take a look at who is here in the Souper Sunday kitchen this week:
Here with a classic favorite, Beef Vegetable Soup is Donna from My Tasty Treasures. She says, "This Beef Vegetable soup recipe is adapted from Cooks Illustrated, and is a keeper in our home, made every fall/winter season. A wonderful, hearty soup that is pleasing. Chunky enough for a meal and delicious leftover too!" (Check out the delectable quick Apple Pie she has on the same post too). 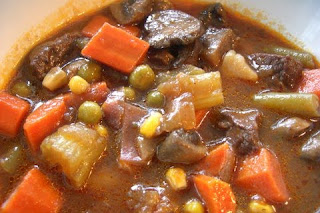 Lee Ann from Mangos, Chili and Z brought a White Bean and Chicken Chili and she thinks it could be "The best white bean chili I have had-EVER!" From a Giada De Laurentiis recipe, Lee Ann says "The odd combination of the flavors march right up the aisle, all the way to the altar, and to everyone’s surprise, and without much ceremony, join in holy matrimony. First of all, I’ve never seen chard in a White Chili recipe, nor have I seen Parmesan Cheese in a White Chili recipe. But they seemed happy, so who am I to judge." 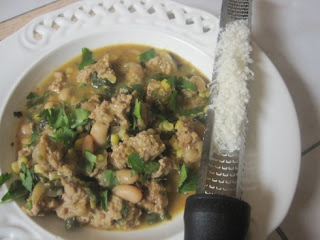 After seeing the Smoky Shrimp-and-Chorizo Soup on a blog, Natashya from Living in the Kitchen with Puppies knew she had to make it. She says, "Ever have one of those moments when you read a recipe and, not only does it sound delicious, but you have everything you need to make it on hand already? I love it when that happens. I saw this hearty soup recipe on my friend's foodie blog Fresh Local and Best and just had to make it. It reminded me of paella, in soup form, and had all my favourite flavours." 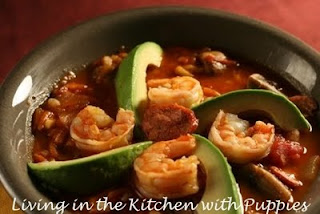 Our squash-loving friend Joanne from Eats Well With Others is busy celebrating her "12 Weeks of Winter Squash" with lots of tasty recipes like this Butternut Chili. The cold temperatures in her area lately have her needing some warmth. Joanne says, "There is nothing like a good bowl of chili to warm you up, however. Especially when that chili is infused with the sweet notes of buttercup squash and red bell peppers. And when it is dotted by vaquero beans, a type of heirloom bean that Rancho Gordo describes as being a cousin to the Anasazi whose inky black and white markings resemble that of an appaloosa." 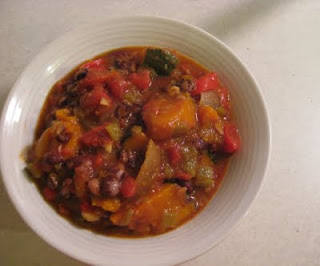 All the way from the UK, it's my good friend Foodycat with a delicious soup and sammie combo, her Carrot & Leek Soup and Welsh Rarebit. Foodycat says, "The weather has turned cold and nothing seems more appetising than a simple bowl of soup and cheese on toast. I decided that instead of doing a regular grilled cheese on toast, I'd make it a bit fancier and do a rarebit - it's George Gaston's fault, he did one recently that gave me such a craving!" 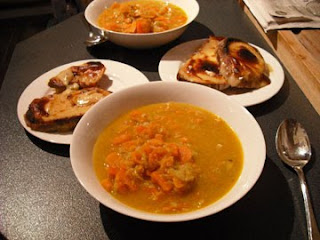 Some wonderful hearty dishes this week! Thanks to everyone who participated. If you have a soup, stew, chili or other soup-like creation, or a salad or sandwich you would like to share, click on the logo on the side bar for all of the details.
Happy Sunday!