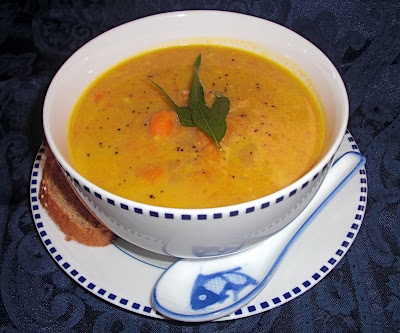 I have been trying to work my way through a 5 lb bag of organic baby carrots the last week or so and this Carrot Bisque seemed like a great way to use up a bunch. It's from Vegan With A Vengance by Isa Chandra Moskowitz, which I bought used the other day because I like her other book, Veganomicon so much. This recipe stood out because it is simple, relatively quick and the combination of sweet and spice sounded like the perfect way to brighten the rainy, windy, gloomy days we have been faced with lately.
Isa Chandra Moskowitz says: "I've never been crazy about carrot soups, they always seemed a little too skimpy and health-foody for me. But this slightly sweet, incredibly creamy and hearty carrot soup changed all that. Its easy to make to boot." 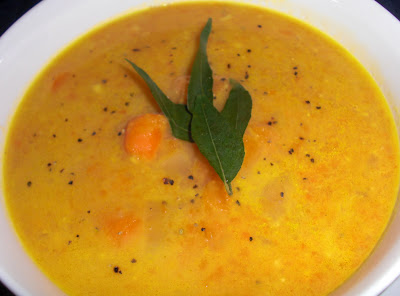 Carrot Bisque
Vegan With A Vengeance by Isa Chandra Moskowitz
(Serves 8)
3 lbs carrots, peeled and diced into a little smaller than 1/2" pieces
1 large onion, chopped
2 Tbsp peanut oil (vegetable oil will do)
2 cloves garlic, minced
1 Tbsp curry powder
1/2 tsp salt
a few dashes fresh black pepper
3 cups vegetable broth, or 1 bullion cube dissolved in 3 cups water
1 (13 oz) can coconut milk
1 Tbsp maple syrup
In a stockpot over low-medium heat, cook the carrots and onions in the peanut oil for 7-10 minutes; cover and stir occasionally. You want the onions to brown but not to burn, although if they burn a little bit it's not the end of the world. Add the garlic, curry, salt, and pepper; saute for 1 more minute. Add the 3 cups of broth, cover, and bring to a boil. Lower the heat and simmer for 10-12 minutes, or until the carrots are tender.
Add the coconut milk and bring to a low boil. Turn the heat off. Use a handheld blender to puree half of the soup; if you don't have one, then puree half the soup in a blender and add it back to the soup pot (see Punk Point). Add the maple syrup and stir. Serve hot.
Punk Point: If you are using a blender to puree the soup, let the soup cool a bit so that the steam doesn't cause the blender lid to pop off and hot soup to splatter everywhere. Once the soup has cooled, give it a few pulses in the blender, lift the lid to let steam escape, and repeat. 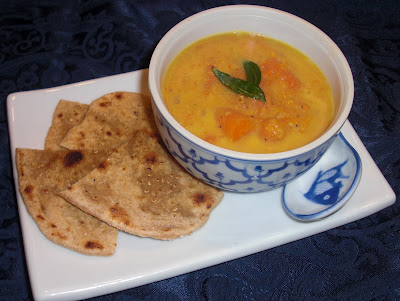 Notes/Results:  Slightly spicy, a bit sweet, very rich and creamy, this is a a good and filling bowl of soup. I didn't have peanut oil so I used walnut oil instead and used my usual "lite" coconut milk which worked just find. Garnished with some curry leaves and served with bread, it was a good hearty lunch. It also reheats well, (good because it makes a lot!), and it paired nicely with some homemade cumin-sesame flatbread, that I will post about later on. A good, healthy choice for a somewhat rainy Souper Sunday.

Let's see what other "souper" creations we have this week:
In an effort to embrace part of her heritage and stay warm in the cold, bitter wind, Tara, the Diva of Beach Eats, cracked open the Hungarian cookbook sitting on her shelf, that she purchased sometime in the 1980's. Her mission?  Make the only recipe she has ever cooked from the book; Goulash Soup (or "Gulyas Leves" in Hungarian). Rich, spicy and filling, and filled with homemade "csipetke" (pinched noodles), it proved to be a delicious choice. 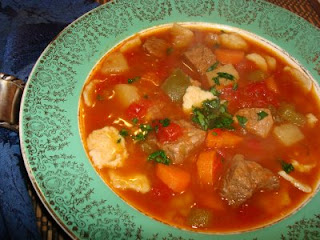 Also getting spicy this week was Ulrike from Küchenlatein who made a zesty, hot Spicy Pasta Soup. Although flowers are starting to bloom in Germany, it is still the kind of weather for warming soups. The red chili she used proved to be a bit too hot for one of her sons and his guest. Her other son didn't find it to be hot at all and for Ulrike it was just right, especially when served with coconut-almond naan to mop up some of that heat. 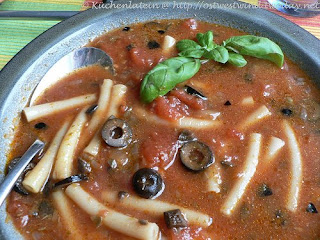 Searching for a hint of spring in her neck of the woods, Amanda from Joie de Vivre found it in this lovely, lemony Potage of Lentils. Amanda learned that this soup is sometimes called "Esau's Soup" from a biblical story, where his birthright is traded by Esau to his brother for a bowl of delicious smelling soup. Although she is not sure it is worthy of giving up one's birthright, Amanda says it is filling and "down-right yummy" and even better reheated the next day. 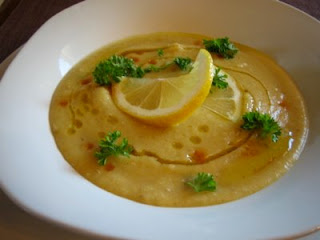 A crazy schedule full of multiple work projects and deadlines had Kim at Ordinary Recipes Made Gourmet, needing a healthy, hearty bowl of goodness. Her recipe for Kale Soup with Beans, fits the bill nicely. Full of nourishing vegetables, greens and beans, the smell of this soup simmering filled the the whole house with a delicious aroma. Although it is a vegetarian recipe, Kim says this one is hearty enough for the meat lovers out there too. 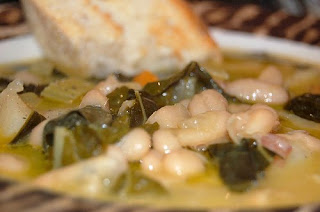 I'm glad I am not the only one with a "massive" folder of recipes to try! Heather of girlichef, had a recipe of an unknown origin for Tuscan Bread Soup that she has been wanting to try as she is dreaming of Tuscany lately. Using the recipe jotted on a scrap of paper as a base, she adapted it into a delicious, creamy dish, filled with onion, garlic, and thyme. A topping of toasted bread, drizzles of olive oil and Parmesan, make this soup a mini-vacation to the Italian countryside. 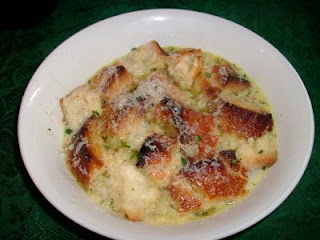 Also channeling Italy with her soup this week is, Donna from My Tasty Treasures. She tried the Barefoot Contessa's recipe for a homey Lentil Vegetable Soup and she calls it "just wonderful", (does Ina Garten have any recipes that are not wonderful?!). Ina has this one full of veggies, herbs, spices and lots of hearty lentils and Donna says it "makes loads and freezes well". She served it with the perfect accompaniment of Focaccia with Olives and Rosemary. 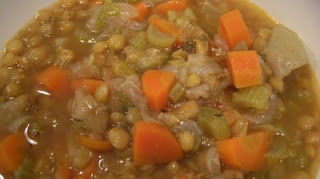 On a campaign to promote the oft-maligned lima bean is Natashya from Living in the Kitchen with Puppies who tried a delicious Baby Lima Soup with Chipotle Broth courtesy of blogger Heidi Swanson's Super Natural Kitchen cookbook. Natashya feels, (and I heartily agree with her!), that lima beans have been given a bad rap and when cooked properly, like in this spicy, flavorful soup, they taste great and give a good "meatiness" to any vegetarian meal. 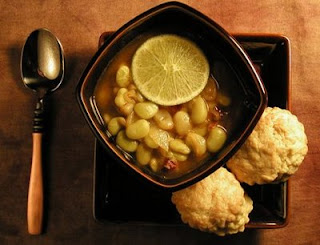 Christine from Kit's Chow has the perfect soup for Lent Fridays or any day of the week; her Cilantro Soup with Seafood. A refrigerator soup, created by using up leftovers, Christine says this easy soup is even worth just buying the ingredients to make. Chock full of seafood, onions and cilantro, along with other yummy tidbits from her fridge, this delicious concoction is garnished with some flavorful ginger-scallion sauce. Christine has some great recipes for those observing Lent or those who just want to eat well, on her site. 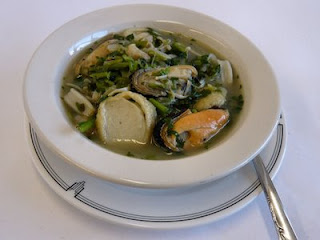 A last minute entry and a new face for Souper Sundays, please help me welcome Debby from A Feast for the Eyes, who comes to us from Monterey Bay, California. A self-described "soupaholic", (you are not alone out there Debby!), she has two soups to share with us this week.  The first is the epitome of Mexican comfort food, Chicken & Tortilla Soup. Utilzing crock pot cooked chicken and broth, veggies and spices, and topped with tortilla strips, avocado and other goodies, it was the perfect headache cure. 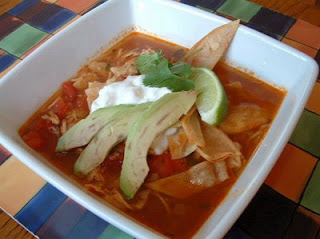 Her second recipe is "Not Your Campbell's" Bean & Bacon Soup. It's made easy in her beloved pressure cooker with a "secret ingredient" of cloves and this thick, hearty soup was a winner at her house. Debby had hoped to have the leftovers for lunch but her son found them and polished it off. (There was small comfort in him calling it one of her best soups). 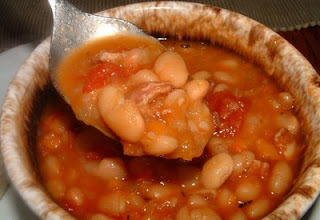 Another week of delicious soups!  Thanks to everyone for participating! Please take some time and check out all their blogs for more pictures, details and fabulous recipes. If you have a soup or soup-like creation that you would like to share, click on the Souper Sunday logo on the side bar for all the details.
Have a wonderful week!
Posted by Deb in Hawaii at 12:05 PM