The Book Tour Stops Here: A Review of "A Simple Favor" by Darcey Bell, Served with a Guacamole Grilled Cheese Sandwich

On today's TLC Book Tours stop, I'm reviewing the debut domestic psychological thriller, A Simple Favor by Darcey Bell and I'm pairing it with a simple and delicious Guacamole Grilled Cheese Sandwich inspired by the book. 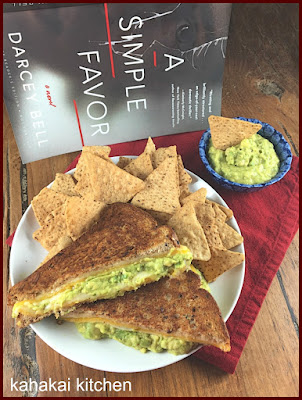 She knows all your secrets.

That’s why she’s so dangerous.

A single mother’s life is turned upside down when her best friend vanishes in this chilling debut thriller in the vein of Gone Girl and The Girl on the Train.
It starts with a simple favor—an ordinary kindness mothers do for one another. When her best friend, Emily, asks Stephanie to pick up her son Nicky after school, she happily says yes. Nicky and her son, Miles, are classmates and best friends, and the five-year-olds love being together—just like she and Emily. A widow and stay-at-home mommy blogger living in woodsy suburban Connecticut, Stephanie was lonely until she met Emily, a sophisticated PR executive whose job in Manhattan demands so much of her time.

But Emily doesn’t come back. She doesn’t answer calls or return texts. Stephanie knows something is terribly wrong—Emily would never leave Nicky, no matter what the police say. Terrified, she reaches out to her blog readers for help. She also reaches out to Emily’s husband, the handsome, reticent Sean, offering emotional support. It’s the least she can do for her best friend. Then, she and Sean receive shocking news. Emily is dead.

The nightmare of her disappearance is over.

Or is it? Because soon, Stephanie will begin to see that nothing—not friendship, love, or even an ordinary favor—is as simple as it seems.

A Simple Favor is a remarkable tale of psychological suspense—a clever and twisting free-fall of a ride filled with betrayals and reversals, twists and turns, secrets and revelations, love and loyalty, murder and revenge. Darcey Bell masterfully ratchets up the tension in a taut, unsettling, and completely absorbing story that holds you in its grip until the final page. 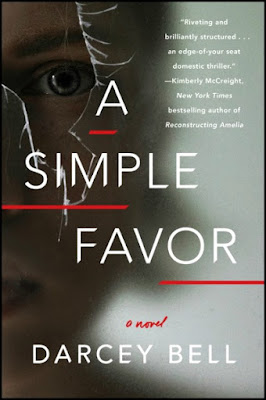 I like a good psychological thriller and A Simple Favor came along at a good time for me, having just read a spate of World War II fiction--for review and for pleasure, I wanted something less sad and where I wasn't personally invested in the welfare happiness of the characters. In this book, similar to Gone Girl and The Girl on the Train that the blurb compares it to, the characters are of the unlikable kind, making it easy for me to not worry overly much about them and just go along for the bumpy ride they are on.

The story is told in three parts the first is solely from the perspective of single mother Stephanie and much is from her Mommy blog posts, in the second part, her missing best friend Emily weighs in, and in the third, Emily's husband Sean's perspective is added. Stephanie hides a lot of secrets behind her Mommy blog perfect persona--including one with a definite 'ick factor' that I won't go into here for fear of spoilers. I found Stephanie's chirpy and overly self-serving blog posts pretty annoying (Hah! I am sure there are people who think my blog posts are annoying) although they were useful in setting the stage for the story and the contrast with the sections of her private thoughts uncovers the big differences between Stephanie in real life and Stephanie online. Emily also has secrets galore and is, to put it mildly, not a very nice person at all--although definitely the most intriguing of the three main characters. Sean is basically an idiot and when Stephanie and Sean's relationship changes, it's hard not to want to wash your hands of all three of them, worry for the future for their young children, and be glad you aren't in their 'friendship circle.' Emily's chapters were the most interesting and added the most tension to the story--wondering what she would do next kept me going. Personally, I wanted the book to have a few more twists that I didn't see coming. Secrets were revealed, but there were no big surprises waiting for me or the solid (pardon my French) WTF? moment that I truly wanted.

A Simple Favor is the debut novel for this author and I think she shows a lot of promise. Although it wasn't a total win for me, it is a quick read and it was a good diversion that kept me engaged. If you like this kind of mystery thriller that leans a bit toward secrets and darker side of suburban family life, it is worth adding to your TBR stack.

Darcey Bell was born in 1981 and raised on a dairy farm in western Iowa. She is a preschool teacher in Chicago. A Simple Favor is her first novel.

There is food in A Simple Plan. Stephanie is a opportunistic vegetarian (for a reason revealed in her story) but cooks burgers for others and she succumbs to cooking and eating Sean's overcooked meat and potatoes dinners. There was mention of veggie burgers, a double bourbon, steak, beer, pasta with fresh tomato sauce, eggplant parmesan, Korean tofu stew, a well-done veal chop, pasta, microwaved baked potato skins at a hotel bar, white wine, a martini straight up, and a dinner of crusty perfect mac and cheese. 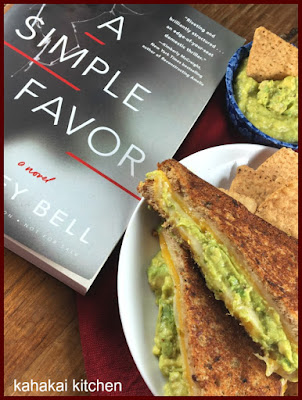 For my book-inspired dish, I decided to combine a grilled cheese sandwich that Emily orders and Stephanie copies and guacamole--when he is missing his mom and fighting against Stephanie, Emily's son Nicky refuses to eat anything but guacamole and chips. I decided to put the guacamole into the grilled cheese for a tasty sandwich. 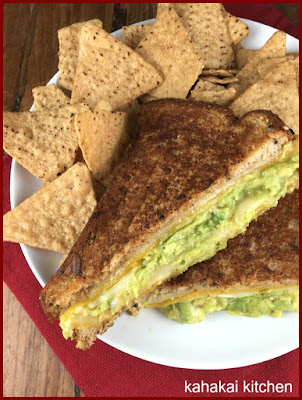 This is a simple recipe that you can adapt to what you have on hand or what you like. I prefer a bit of spice and acidity with all of the creamy cheesiness and guacamole so I added a bit of cayenne or jalapeño to my guacamole, lots of lime juice, and used pepper jack cheese. 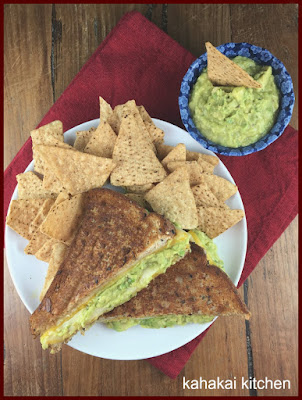 Notes/Results: If you like guacamole and you like grilled cheese, you will enjoy this sandwich. It is decadent comfort food at its best. I don't skimp on the guacamole so it is a bit messy but very good. I served mine with extra guacamole and some sweet potato tortilla chips. I would happily make this again. 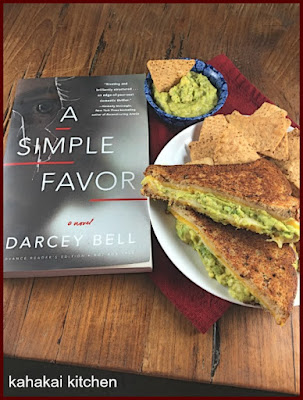 I'm linking up this tasty sandwich to Souper Sundays, hosted here at Kahakai Kitchen. Each Sunday we feature delicious soups, salads, and sandwiches from friends around the blogosphere--please join in if you have any to share. Here's this week's post and linkup.

Note: A review copy of the "A Simple Favor" was provided to me by the publisher, Harper Collins, and TLC Book Tours. I was not compensated for this review and as always, my thoughts and opinions are my own.