The Book Tour Stops Here: A Review of "In the Blue Hour" by Elizabeth Hall, Served with a Recipe for Huevos Rancheros

On today's TLC Book Tour stop, I am reviewing the new novel In the Blue Hour by Elizabeth Hall and accompanying this mystery with Native American folklore, spirits, and magic is a breakfast of simple Huevos Rancheros that was inspired by my reading. 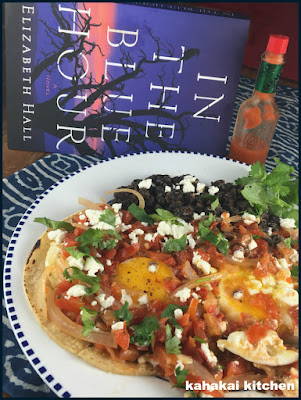 Elise Brooks dreams of a car accident on an icy road. Weeks later, her beloved husband, Michael, is killed in just such a crash. Now, overcome with grief and uncertainty, Elise believes his spirit may be following her in the form of a raven, trying to tell her something from beyond the grave.

Desperate to understand the signs, Elise embraces both the Native American wisdom she grew up with and the world of psychics and seers. So when a tarot-card reader suggests she take a journey to the mysterious address found in Michael’s old jacket, she embarks on a cross-country trek to follow the clues.

Accompanied by Tom Dugan, an engineer and scientist who does not believe in psychics, mediums, or the hoodoo “conjure woman” they encounter on the road, Elise navigates the rituals and omens of the spirit world in an attempt to unravel the mystery of her husband’s message. "The night waited. She could hear the flakes of snow as they pillowed on the ground, heard the hoot of an owl, hidden in the brush of the pines. And somewhere, deep beneath the surface of that heavy silence, she could hear the beating of her own heart. "

When I opened The Blue Hour, I was immediately pulled into the prologue by the author's beautiful prose and it continued throughout the book. I love it when an author can transport me to a place with their vivid descriptions and Elizabeth Hall took me through New Mexico and on a road trip to Tennessee all within the pages of the book. The sights, sounds and smells she describes all set the mood of this mysterious story, steeped in Native American folklore and magic. Elise, the main character, further drew me in. She is deeply mourning the loss of her husband Michael and dealing with the guilt from misinterpreting her dream of a car accident before his death and her failure to warn him. When she keeps seeing the same raven (a raven carving was the last finished work in her husband's studio) and the spirits and Michael seem to be trying to tell her something, Elise does all she can to figure out the message, including taking the guidance of a psychic and tarot card reader along with others who have connections to the spirit world.

I don't know a whole lot about Native American culture and the folklore, particularly around the spirit world and I found it fascinating to read about. I liked how it was such a big part of the story but was not overdone--it felt believable. The pairing of Elise (who grew up in the periphery of the culture with her friend Monica's family and accepted that the spirit world existed) with Tom Dugan (an engineer and firm non-believer in anything not proven by science) added to the story and kept the mystical parts grounded, while still allowing for a spooky edge that raised a few goosebumps.

In the Blue Hour is a unique and enjoyable read that I wanted to linger over--savoring the story, characters and descriptions--yet I also wanted to get to the end of the book and discover the mystery. I liked the flow of the story and felt that it pulled me along to a satisfying conclusion. I have Elizabeth Hall's first book Miramont's Ghost,on my Kindle and I have a feeling that it will move up towards the top of my TBR list based on this book. 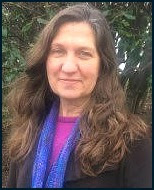 Author Notes: Elizabeth Hall, author of Miramont’s Ghost, has worked as a teacher, communications consultant, and radio host. She spent many years in the mountains of Colorado and now resides in the Pacific Northwest, where she indulges in the fiber arts of knitting, beading, and weaving.

There was an amazing amount of food inspiration in The Blue Hour, beginning with the piñon or pine nuts that Elise and her friend's family gather, toast and eat and the wild plums trees, thick with fruit. There were regional foods like tortillas, the scent of roasting green chiles, tomatoes, both red and green chili, enchiladas, tamales, pumpkin empanadas, chips and guacamole. There was also mention of trout--rainbow and brook, lemonade, chicken salad sandwiches, almond-crusted brie, mango chicken enchiladas, kale salad, fried chicken, pot roast with root vegetables, roasted Brussels sprouts, and coconut cream pie, turkey, pulled pork with coleslaw and baked beans, meatloaf with scalloped potatoes and green beans, roast beef with potatoes and carrots, gravy and biscuits, green beans with bacon and banana cream pie for dessert. Whew! 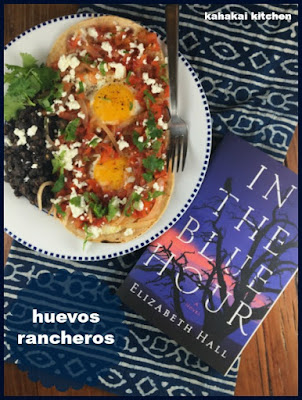 With so much to choose from, I was going to make something with pine nuts as my book-inspired dish, but then I decided to make huevos rancheros as it was mentioned as the breakfast special of David, who owned the house in Tennessee that was the destination of the road trip Elise took with Tom. I love huevos rancheros and I had some leftover bits and pieces of ingredients leftover from making fish tacos for my own house guests last week. I found a simple recipe from Rick Bayless that sounded good and quick--always a plus in my book. 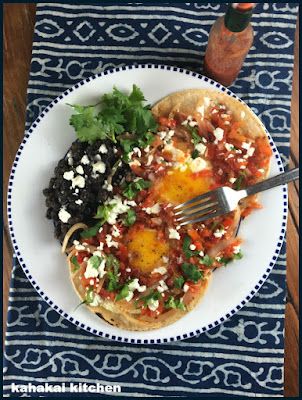 Steam-heat or griddle heat the tortillas. Put warm tortillas on a hot dinner plate. Top with cooked sunny-side up eggs. Pour hot salsa over everything (leaving the 2 yolks exposed if you wish).

Sprinkle with sliced onion, chopped cilantro and crumbled cheese. Serve with refried black beans or fried potatoes if you wish. 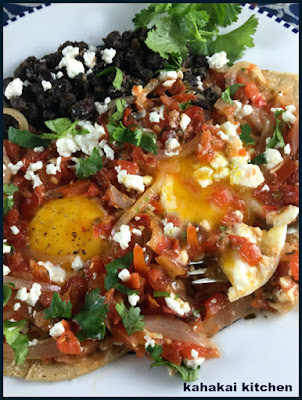 Notes/Results: These are a quick and simple and quite tasty breakfast (or lunch or dinner...) that uses prepared salsa. It is a great way to use up leftovers from taco night. Rick Bayless's recipe uses his Frontera brand salsa (which is very good) but I didn't have it on hand this time, so I used a local refrigerated brand. The recipe also calls for garnishing it with raw onion slices, but I prefer my onion cooked so I sauteed the slices until they were soft and translucent, before adding the salsa. I also had feta on hand so I used it in place of the Mexican cheese and served my huevos rancheros with leftover black beans instead of the fried potatoes served with it in the book, adding extra fiber and protein. Making these reminded me I need to enjoy this dish more often--so I will happily make it again. ;-) 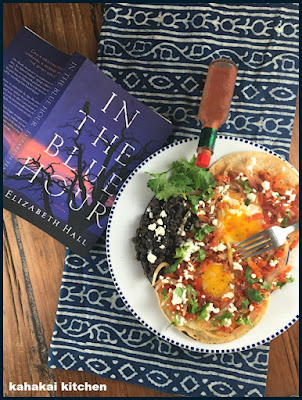 Note: A review copy of "In the Blue Hour" was provided to me by the publisher and TLC Book Tours. I was not compensated for this review and as always my thoughts and opinions are my own.