On today's TLC Book Tour I am reviewing the novel, Finding Libbie by Deanna Lynn Sletten and although it's 80 degrees F. and 74% humidity, I am channeling fall and pairing my book review with the perfect autumn comfort snack--Simple Spiced Apple Cider and Cinnamon Toast. 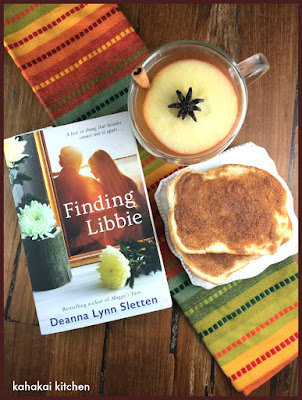 Poring over a dusty hatbox of photographs in her grandmother’s closet, Emily Prentice is shocked to discover her father was married to his high school sweetheart before meeting her mother.

In the summer of 1968, Jack and Libbie fall in love under the spell of their small town, untouched by the chaos of the late sixties. Though Libbie’s well-to-do parents disapprove of Jack’s humble family and his aspiration to become a mechanic, she marries Jack a year after they graduate high school. But soon their happiness crumbles as Libbie’s mental state unravels and she is drawn to alcohol and drugs.

Despite his efforts to help her, Jack loses the woman he loves and is forced to move on with his life.

Now that Emily’s mother has passed away, Jack is alone again, and Emily grows obsessed with the beautiful woman who had given her father such joy. Determined to find Libbie, Emily pieces together the couple’s fragmented past. But is it too late for happy endings? 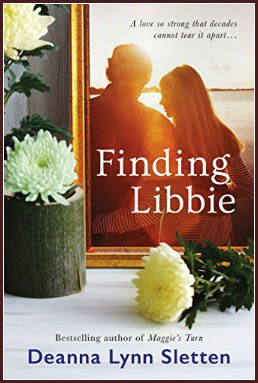 Finding Libbie was tougher to read than I thought it would be--very good, but just hard to read emotionally. From the description, I thought more time would be spent with Emily looking for Libbie, her father's first wife--a big surprise to Emily who learns about it when helping her grandmother pack up her house. The bulk of the book is set in the mid-1960s-70s, and tells the love story of Libbie and Jack, how it all began and how it went terribly wrong when Libbie's mental health issues lead to alcoholism and prescription drug use and ultimately rip the couple apart. If addiction is a trigger for you, the book may be difficult to get through, but the journey is ultimately worth it. I found myself turning the pages--both wanting to know what exactly happened between the couple and hoping for some kind of positive outcome for Libbie--who although at times frustrating as an addict can be, is such a good soul that I wanted the best for her.

Wanting to make sure Libbie is OK and found happiness in her life is Emily's motivation for searching for her and since her father is lonely and still struggling after her mother's death, she thinks that it might be helpful for him as well. This generosity of spirit makes Emily a likable character. In fact the book is full of likable characters, with the exception of Libbie's family who went well beyond just trying to hide Libbie's issues--granted mental health issues were looked at very differently and misunderstood in that era, but they were just plain awful. The chapters with Emily's search for Libbie bracket the love story and I wished there was a bit more of the present day story and more to the epilogue. Still, it's a small criticism for a well-written book that takes a deeper and more heartrending look at love than your average romance. Finding Libbie is my first book by this author but based on this book, I will definitely be picking up more of her novels. 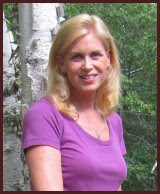 Author Notes:  Deanna Lynn Sletten grew up on the sunny coast of Southern California before moving to northern Minnesota as a teenager. Her interest in writing novels was sparked in a college English class, and she has been writing in some form or another ever since. In 2011, Deanna self-published her first novel and has since published several more, both on her own and with Lake Union Publishing.

Deanna enjoys writing heartwarming women’s fiction and romance novels with unforgettable characters. She has also written one middle-grade novel that takes readers on the adventure of a lifetime. She believes in fate, destiny, love at first sight, soul mates, second chances, magic, and happily ever after—all of which are reflected in her novels. Deanna is married and has two grown children. When not writing, she enjoys walking the wooded trails around her home with her beautiful Australian shepherd or relaxing on her boat in the summer. Connect with Deanna on her website, Facebook and Twitter.

There is food in Finding Libbie and sadly a whole lot of alcohol (gin and tonics, wine, wine and 7 Up, vodka and 7Up, bourbon whiskey, and champagne). Most of the food is baked goods cooked by Emily's grandmother Jan and by Libbie, who learned to cook and bake from Jan. Food mentions include homemade sweet rolls with coffee, bread, cakes, brownies and cookies, Dairy Queen burgers, fries, Cokes and ice cream and sundaes, A&W drive-in burgers, popcorn, hot dogs and cotton candy from the fair, lots of roast beef and roasted chicken and potato dinners, green beans, glazed carrots, a steak and shrimp dinner with cheesecake for dessert, chocolate cake, toast, orange juice and coffee, sandwiches, cereal, casserole, holiday cookies, roasted duck with orange-ginger glaze, wild rice and asparagus, blueberry muffins, and lasagna.

I don't eat meat, don't bake much (or need baked goods sitting around), and just couldn't bring myself to make a cocktail for this book, so I decided to go another direction. Since I felt like I wanted to comfort both Libbie and Jack through most of the book, I decided to go for the ultimate comfort food of buttery cinnamon toast and I paired it with hot spiced apple cider because I have been craving it (and the fall weather I associate with it). Here's a secret. I intensely dislike pumpkin pie and pumpkin pie-flavored anything, so when most people's thoughts of fall include pumpkin-spiced EVERYTHING (It's way out of control people!), my thoughts turn to hot, lightly-spiced apple cider. I don't mind a shot of caramel for a treat and if you aren't pairing it with a book that features alcoholism, a shot of apple brandy or rum is welcome too. I like to use a combination of cinnamon, a few cloves, and some star anise--but just a kiss of spice flavor, as I want to taste the apple cider.

Paired with a couple of slices of buttered toast with cinnamon and a sprinkle of coconut sugar, it makes a wonderful fall afternoon snack. 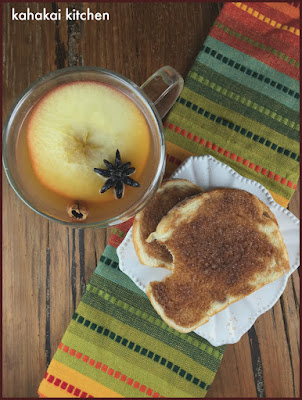 Place apple juice and spices into a medium sauce pan and heat over medium-low for 15-20 minutes, until spices have had a chance to infuse their flavor. Revove from heat, add vanilla if using and strain into mugs. (Add a shot of rum, spiced run, or apple brandy if desired.) Garnish with apple slices and cinnamon sticks and serve. 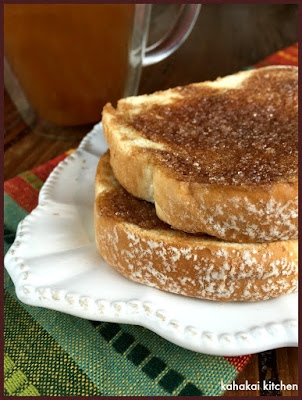 Notes/Results: If it wasn't so blasted warm and humid today, I would have totally conjured fall with this delicious afternoon snack. The sweet apple cider and the cinnamon toast (crispy on the outside, soft within and a slightly crunchy, buttery top) went perfectly together and I made enough cider to heat up later--when it is a respectable drinking hour--and add a glug of calvados (apple brandy). What I like to do with my cinnamon toast is to let some good butter soften and mix the cinnamon and coconut sugar into the butter, then spread it on the toast fresh out of the toaster. It melts into the bread and is pretty much perfect! 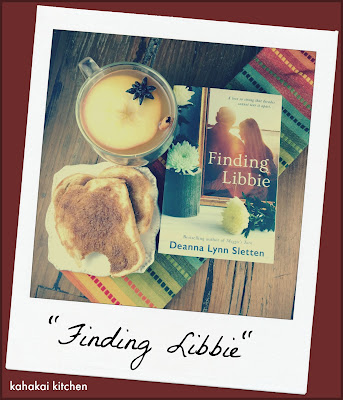 Note: A review copy of "Finding Libbie" was provided to me by the publisher and TLC Book Tours in return for a fair and honest review. I was not compensated for this review and as always my thoughts and opinions are my own.