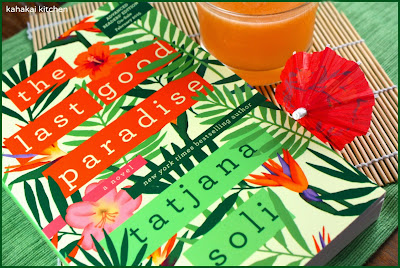 Need a little tropical island escape? Here's a review of The Last Good Paradise: A Novel by Tatjana Soli, set on a private island in the South Pacific and with a cast of characters looking to escape their lives and find their bit of paradise. To wash down all of the drama and angst, I am serving up this TLC Book Tour review with a cold and sweet glass of Tropical Guava Rum Punch. 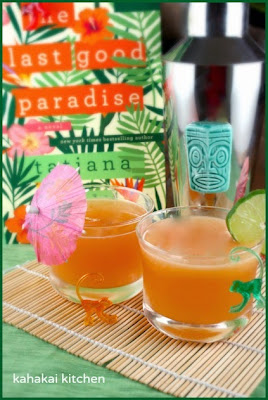 On a small, unnamed coral atoll in the South Pacific, a group of troubled dreamers must face the possibility that the hopes they’ve labored after so single-mindedly might not lead them to the happiness they feel they were promised.

Ann and Richard, an aspiring, Los Angeles power couple, are already sensing the cracks in their version of the American dream when their life unexpectedly implodes, leading them to brashly run away from home to a Robinson Crusoe idyll. Dex Cooper, lead singer of the rock band, Prospero, is facing his own slide from greatness, experimenting with artistic asceticism while accompanied by his sexy, young, and increasingly entrepreneurial muse, Wende. Loren, the French owner of the resort Sauvage, has made his own Gauguin-like retreat from the world years before, only to find that the modern world has become impossible to disconnect from. Titi, descendant of Tahitian royalty, worker, and eventual inheritor of the resort, must fashion a vision of the island’s future that includes its indigenous people, while her partner, Cooked, is torn between anarchy and lust.

By turns funny and tragic, The Last Good Paradise explores our modern, complex and often, self-contradictory discontents, crafting an exhilarating story about our need to connect in an increasingly networked but isolating world. 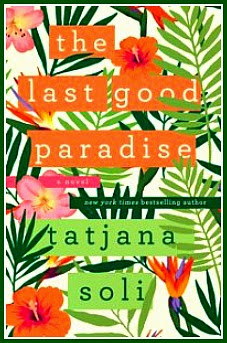 I have mixed feelings about The Last Good Paradise. I found the first part of the book--meeting the characters and learning parts of their stories absorbing. I found humor in the forced (supposed) primitiveness of Loren's resort and how desire for the concept of being unplugged and off the grid broke down in reality. Especially how Ann, not wanting to be contacted by her and Richard's badly-behaving business partner (and her former lover) Javi, tossed an expensive (and thankfully) water-proof Satellite phone in the plunge pool, pulling it out of the water when she wanted/needed to connect. The group dynamics between everyone were interesting and like a mini soap opera--between the couples, the different individuals with each other, relationships between the guests and the staff--Loren, Titi and Cooked, and those three with each other. But then things seemed to bog down and the middle of the novel had my interest lagging. I found it difficult to connect with the characters and didn't really like how the plot shifted toward the attempted activism of Cooked, Dex, Ann, and Wende. Their attempts to bring attention to the French government's lack of accountability for the health effects on the Tahitian people caused by sanctioned nuclear testing in the islands seemed out of place with the rest of the book. A serious message for sure, and one that made me think, but things just got a bit silly and the novel seemed to lose its focus. The ending picked the pace back up a bit and although most things were not completely resolved, there was some satisfaction in learning where the characters seemed to be going. The Last Good Paradise is a good cautionary tale on the truth that no "paradise" isn't perfect and the troubles one tries to escape, or new troubles on top of the old, can still be found there. Overall an interesting book, not my favorite but I would give the author's other two books--The Lotus Eaters and The Forgetting Tree a try based on this one.

Author Notes: Tatjana Soli is a novelist and short story writer. Her New York Times bestselling debut novel, The Lotus Eaters, was the winner of the James Tait Black Prize, a New York Times Notable Book, and a finalist for the LA Times Book Award. Her critically acclaimed second novel The Forgetting Tree was also a New York Times Notable book . Her stories have appeared in Zyzzyva, Boulevard, and The Sun, and have been listed in Best American Short Stories. She lives with her husband in Southern California. 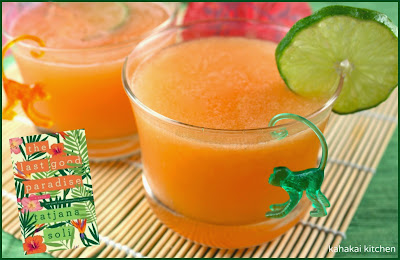 With Richard being a chef there was a fair amount of food inspiration in The Last Good Paradise to choose from and make a dish representing the book. From Pacific island fare, to the dishes Richard and Javi make in their restaurant kitchen like potato-and-fennel au gratin, rabbit fricassee with cilantro and onions, an organic baby greens salad with hearts of palm, Roquefort-and-sauteed-apple quesadilla, and mango ice. Richard gets queasy cooking meat and wants to be a baker, so a dessert like the stunning wedding cake he makes for Titi and Cooked would have been appropriate too. Most of all there was plenty of alcohol consumed on the atoll, including the guava punch served by Titi when new arrivals hit the island. Whether you get rum or local moonshine that knocks you off your feet for days in your drink is dependent on Titi's mood and how she likes you. I chose to go with flavored rum, lime and a combination of guava and mango nectar for my Tropical Guava Rum Punch.

Fill cocktail shaker about 1/2-full with ice. Add rum, guava and mango nectar and lime juice and shake until blended. Pour into 2 (chilled if possible) glasses and garnish with paper umbrellas, drink monkeys, and lime slices if desired. 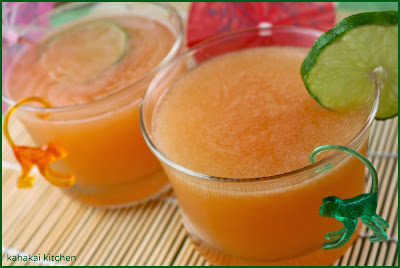 Notes/Results: A touch sweet, a touch tangy, a lot fruity ;-) this is a tasty little cocktail. You can adjust the amount of lime juice to your preference (I like it tart and refreshing) and of course you don't have to use a mix of flavored rums and fruit nectar but I like the blend of flavors--and after all, it is a punch. And although not the knockout from Titi's moonshine, it still packs its own nice punch. ;-) Paper umbrellas and cocktails monkeys are pretty necessary to the tropical drink experience too. I would make this again. 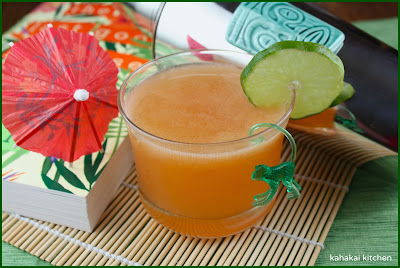 Note: A review copy of "The Last Good Paradise" was provided to me by the publisher and TLC Book Tours in return for a fair and honest review. I was not compensated for this review and as always my thoughts and opinions are my own.