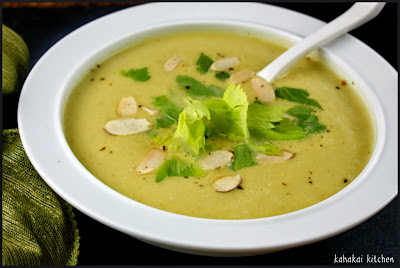 Whenever I end up with an excess of an ingredient to use up, I look for a soup to put it in. So much better than tossing it away and wasting it. I bought a big bunch of celery for  tuna pasta salad and then realized I already had a bunch in fridge. Looking for a celery-based soup, I came across this vegan (and dairy-free and gluten-free) Curried Cream of Celery Soup. I liked the variety of ingredients, was craving curry, and it got a lot of good reviews--so I decided to give it a try. 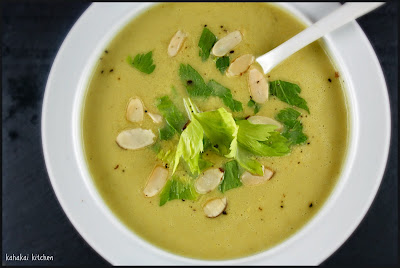 Preheat oven to 350°F. Spread almonds on baking sheet, and toast 8 to 10 minutes, or until golden. Cool.

Purée soup in blender until smooth. Return to pot, and stir in lime juice. Season with salt and pepper, if desired. Ladle soup into bowls, and sprinkle celery leaves and almonds on top. 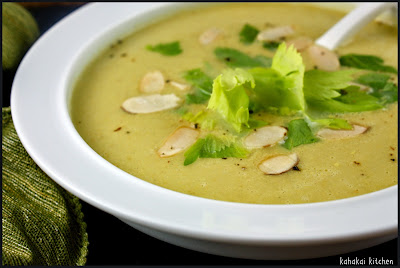 Notes/Results: Velvety smooth and great flavor, this is a simple but elegant little soup. The curry is the predominant flavor, although it isn't overpowering and there is a slight sweetness from the apple and coconut milk, and a bit of acidity from the lime juice. The texture of the celery leaves and toasted almonds on top is a nice contrast to the puréed soup. Since I was using un-waxed organic green apples, I left the skin on for the extra fiber and nutrients. This soup isn't heavy and also tastes good cold, making it good for any type of weather. An easy soup that would be a unique starter for an Indian dinner, I would make this again. 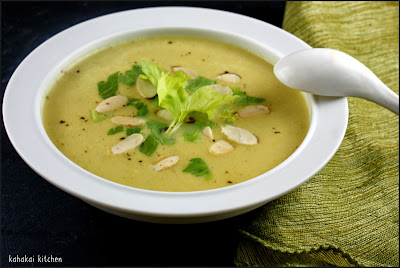 We have some good friends and their dishes waiting in the Souper Sundays kitchen--let's have a look.

Tigerfish of Teczcape - An Escape to Food shares this Easy Rasam Soup and says, "Rasam soup is a soup that can be enjoyed throughout the year, in my opinion. The warmth and spice is elevating in the cool hibernating temperatures of winter but the sourish-factor can be very appetizing when the weather gets too hot causing a loss in appetite. This is an easy Rasam Soup that does not take much effort to make. It might not be the most authentic Indian Rasam Soup recipe but for a quick-fix, definitely worth a try." 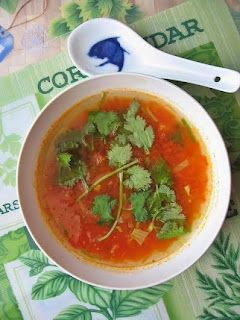 Janet of The Taste Space brings a salad that she liked even better as salad rolls. ;-) Janet says, "It started out as a Thai Kale Salad with Chickpeas and a Peanut Dressing. I made it, I ate it. However, the next day, I thought rice paper rolls would be better.  So I wrapped them up… and decided I didn’t want to bother with new photographs and munched away. Of course, the wrap was better. There is something sensational when all the components of the dish hit your palate at the exact same time: the lemony kale, the sweet red pepper, the crunchy carrots and the chickpeas are not rolling around everywhere…. and how could I forget the delicious peanut sauce? It is light, thinned with vinegar but flavourful with the ginger and orange." 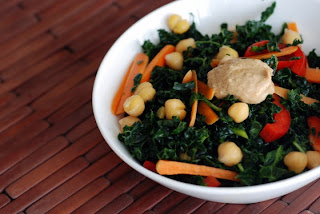 My friend and fellow co-host of I Heart Cooking Clubs, Sue of Couscous & Consciousness made Nigel Slater's Spinach, Orange & Goat Cheese Salad. She says, "Of this dish, Nigel says, "A favourite salad of mine is one where the spinach leaves are matched with oranges and feta.  Lush, salty, refreshing, I use it to lift the spirits."  And he's right.  It is all of those things, and the "sunny" burst of tangy orange slices amongst the velvety spinach leaves, spiked with sharp, salty goats' feta, cannot fail to be uplifting on a gloomy late autumn day. This salad of course would make a great side to just about anything you can think of, but it can just as easily make a meal on its own." 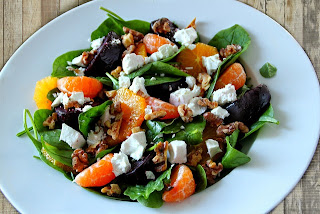 Finally, we have The Best Ever Breakfast Sandwich from Foodycat who says. "I don't think there is anything else I make this regularly, with so little variation, and that is because this is simple perfection. This sandwich is a vegan's nightmare, but strangely (for me) contains no bacon. Seriously, this is sheer perfection that needs no pork products. The combination of toasted brioche, chilli relish, cheese and a fried egg forms a mystical union far greater than the sum of its parts. Creamy, sweet, salty, sharp, hot and pungent in perfect balance. It's so good that it is genuinely worth making the chilli relish while you have your first cup of coffee so that you can have your sandwich with the second cup." 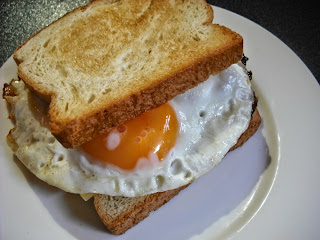 Thanks to everyone who joined in this week. If you have a soup, salad, or sandwich that you would like to share, just click on the Souper Sundays logo on my side bar for all of the details.