There are weeks that I plan far ahead for my weekly Simple Saturday Sipper and other weeks when it gets to be about 4:30 on a Friday afternoon and I decide I'd better throw something together. I'll let you guess which one this week was. This Peanut Butter Lassi started because of a quest for peanut butter yogurt. I met a friend at Yogurtland the other day and got a small splat of their frozen peanut butter yogurt to try with my regular plain-tangy--Ok, Yum!. I have been thinking about it ever since and earlier this week, decided I needed a little treat and went to get some for lunch. Unfortunately there was no peanut butter on their line-up that day :-( so I had to go back to plain-tangy with fruit. Good, but I was still craving peanut butter. The next night I decided to try to make my own and mixed organic peanut butter, Greek yogurt and a bit of agave in my ice cream maker. I ended up going a bit to heavy on the peanut butter (yes, it is possible to have too much peanut butter), and ended up with a mix that was like cold PB with a little yogurt mixed in--not the flavor and texture profile I was going for. 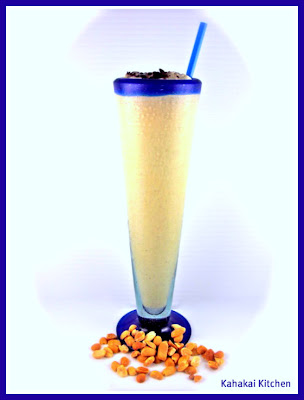 Cut to this afternoon, when I had the brilliant idea of mixing it with more Greek yogurt, a touch of cinnamon, a little rice milk and some ice cubes to make a creamy, frothy Peanut Butter Lassi. Traditionally a lassi is yogurt blended with water and Indian spices or sometimes sweetened with fruit and sugar, but this not-so-traditional one is quite delicious. Since I don't expect you to make up a batch of too-peanut buttery frozen yogurt to make this drink, I would suggest making it by the recipe below. 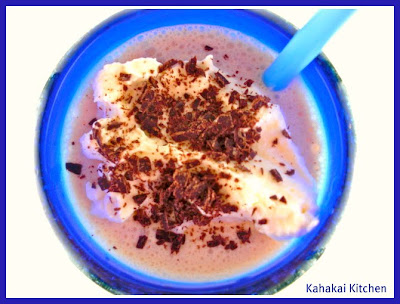 Notes/Results: Yum! Creamy and a much better peanut butter proportion. The kick of cinnamon was nice too. This made a good, slightly indulgent, protein-filled afternoon snack and was cooling on a warm afternoon. Perhaps, if you must be technical, it is more smoothie than lassi but since I can call it whatever I want, lassi it is. ;-) I served mine with a bit of whipped cream and some shaved dark chocolate, but it would also be good with some fresh strawberries, or even a drizzle of jam for a little PB & J action, or even a banana blended in would be nice too. I would make this again.
Happy Saturday!