It's Cook the Books time again, the bi-monthly virtual foodie book club I cohost and of course, per usual, I am right at the deadline. What can I say? February was busy, March was no better and I found myself involved in five "buddy reads" of books with various book groups, not counting this one. This book got put on the back burner and I finished it Tuesday, last night after a long day of work I tossed my dish together and I was way too tired to set up lighting and fuss with the looks, so I apologize for the very bad pictures. 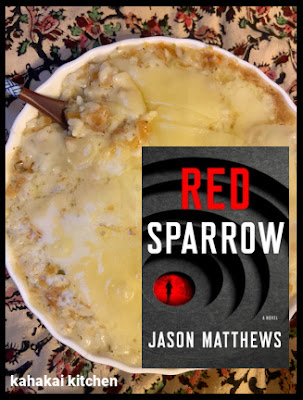 This round of Cooks the Books was hosted by Simona of briciole and her pick was Red Sparrow by Jason Matthews, a spy novel with recipes.
From the Publisher:

In contemporary Russia, state intelligence officer Dominika Egorova has been drafted to become a “Sparrow”—a spy trained in the art of seduction to elicit information from their marks. She’s been assigned to Nathaniel Nash, a CIA officer who handles the organization’s most sensitive penetration of Russian intelligence.

The two young intelligence officers, trained in their respective spy schools, collide in a charged atmosphere of tradecraft, deception and, inevitably, a forbidden spiral of physical attraction that threatens their careers and the security of America’s valuable mole in Moscow. 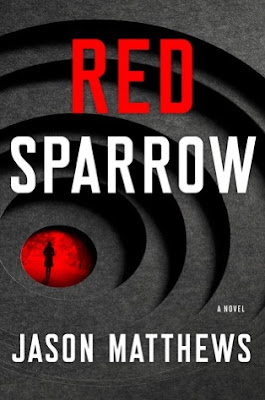 My Thoughts:
I have never been a reader of spy novels. I actually avoided them until the author of one of my favorite series released a new series centered around a former CIA case officer with the first book set in Russia. I gave it a try and enjoyed it enough to load the second and third on my Kindle but I haven't gotten around to reading them yet. Anyway, I digress... we are here to talk about Red Sparrow. I was a bit lukewarm  going into this book and wondered at the combination of spies and food, and was not thrilled to be reading about Russia given the current Ukraine situation, but I actually found myself caught up in the story and wanting to find out what happened next.
It's not a perfect book for me--it's a deeper, grittier dive into the spy trade than I wanted. Some of the violence and misogyny is hard to take, as are the descriptions of "Sparrow School" where Russian women and men train for honey traps and more. The pace is uneven, tension ebbed and flowed and I found myself slogging through some parts and then rushing through others. But I liked Dominika and Nate and some of the other characters and I kept reading. The food descriptions and abbreviated recipes were varied from different countries and cuisines beyond Russia, and I actually marked several I wanted to make or read up on.
Overall, it diversified my reading with a seldom-picked genre, and that's always a good thing. I don't know if I'll keep going--it's a trilogy I believe, but I am curious to see what happens after somewhat of a cliffhanger ending. I may even try and watch the film version (I tend to avoid spy movies too so it wasn't something I made an effort to see.)
Food Inspiration:
As I mentioned above, a recipe follows each chapter, based on something one of the characters cooked or ate. I originally thought about making the "Old Lady's Beet Soup" from the first chapter but I wasn't feeling it. Some of the pastas and sauces sounded good, as did the Bristol Hotel Cucumber Salad and Gable's Cheese Fondue and Proper French Omelet. I ended up going with (Station Chief) Forsyth's Soubise, described as "He knew one dish, a soubise, buttery braised rice and caramelized onions." It was what I wanted most.
I took the recipe sketch in the book and also looked online where I found Julia Child's version. Mine is a combination of the two, cut down t heavily to make a small portion and I cheated by using my favorite frozen glazed onions.(I used a tray which is about 3 onions worth). To save time on a night after a long work day, I cooked my arborio rice about 10 minutes and ended up cooking the dish about 35 minutes instead of Julia's hour. I also added a little dried thyme and stirred it into the mix and besides adding the cheese to the rice mixture, at the last minute, I shaved Gruyere on top of the dish. 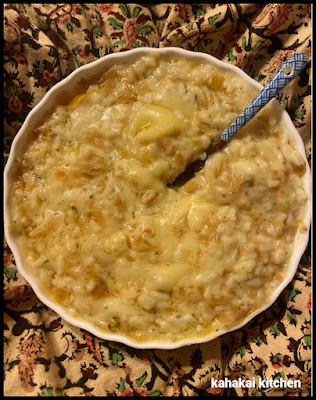 Drop the rice into the boiling water to which has been added the salt. Boil five minutes exactly and drain immediately.

Heat the 1/4 cup of butter in a three-quart flameproof casserole and when it is foaming, stir in the onions. When they are well-coated with butter, stir in the rice, 1/2 teaspoon salt and pepper. Cover and cook very slowly in the oven for one hour, stirring occasionally. The rice and onions should become very tender and will usually turn a light golden yellow. Taste and reseason. (The recipe may be prepared to this point several hours in advance. Reheat before proceeding.)
Just before serving, stir in the cream and cheese and then the softening butter. Taste again for seasonings and turn into a dish. Serve with sprinkled parsley. 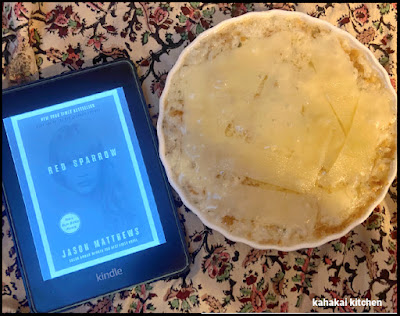 Notes/Results; OK, this is really good--really rich and REALLY good. It's creamy, buttery, decadent, and the sweet, caramelized onions and nutty Gruyere are an excellent match. It's like an oven-baked risotto with less stirring and it probably would even be better without the shortcuts I took. I was both sad and glad that I made 2-3 servings only. Sad because I enjoyed it, glad because health food it is not. I will definitely make it again. 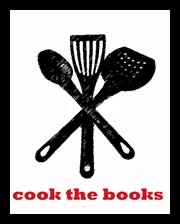 The deadline for this round is today, and Simona will be rounding up the entries for Cook the Books on the website in a day or two. If you missed this round and you like books and food and foodie books, join us for our April/May pick, Taste: My Life Through Food by Stanley Tucci, hosted by me.