The Book Tour Stops Here: A Review of "Golden Child" by Claire Adam, Served with a Recipe for Trinidad Macaroni Pie

It's only Wednesday and it's been a long week already, so in order to ease over the hump and into a hopefully better end of the week, I'm reviewing an interesting debut novel, Golden Child by Claire Adam. Accompanying my review a comfort food dish that hails from another country, but would be appropriate for carb lover's anywhere, Trinidad Macaroni Pie. 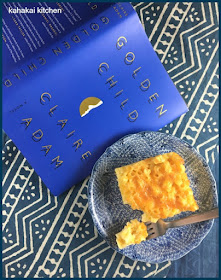 A new novel from Sarah Jessica Parker’s imprint, SJP for Hogarth: a deeply affecting debut novel set in Trinidad, following the lives of a family as they navigate impossible choices about scarcity, loyalty, and love.

Rural Trinidad: a brick house on stilts surrounded by bush; a family, quietly surviving, just trying to live a decent life. Clyde, the father, works long, exhausting shifts at the petroleum plant in southern Trinidad; Joy, his wife, looks after the home. Their two sons, thirteen years old, wake early every morning to travel to the capital, Port of Spain, for school. They are twins but nothing alike: Paul has always been considered odd, while Peter is widely believed to be a genius, destined for greatness.

When Paul goes walking in the bush one afternoon and doesn’t come home, Clyde is forced to go looking for him, this child who has caused him endless trouble already, and who he has never really understood. And as the hours turn to days, and Clyde begins to understand Paul’s fate, his world shatters—leaving him faced with a decision no parent should ever have to make.

Like the Trinidadian landscape itself, GOLDEN CHILD is both beautiful and unsettling; a resoundingly human story of aspiration, betrayal, and love. 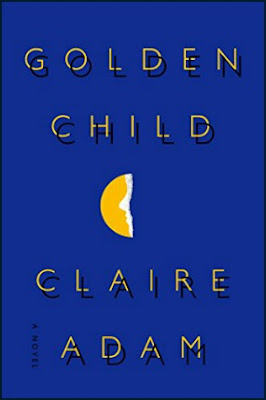 I signed up for this tour because I enjoyed A Place For Us by Fatima Farheen Mirza, Sarah Jessica Parker's first imprint SJP for Hogarth (my review is here) and liked that once again SJP selected a novel that gave me a glimpse of a different culture. Golden Child is set in Trinidad and I think it might be the first book I have read that is set there, and it's a country I know little about. I found myself caught up in the author's vivid descriptions of the country and its people particularly, the Deyalsingh family, who this novel is centered around. Clyde is the father, a man who works hard and does not like to take charity or ask favors from others. Joy, the mother, stays at home and has a large family who (with the exception of her mother and uncle), mostly irritate Clyde by coming about so often. We meet the family when one of their two thirteen-year-old twin sons does not come home. The boys may look alike but are very different with Peter being very intelligent and Paul, who was a difficult birth and lost oxygen, being slower to develop and different. How much of that difference is nurture versus nature is unclear as from the beginning, Clyde and Joy are told he is "retarded" and treat him quite differently from the revered Peter. Paul grows up hearing that he is slow and mentally challenged and that Peter needs to look out for him, and it is too often mentioned directly to him or about him within the family and their community. The story is set mostly in the eighties and moves back and forth from the time Paul goes missing, to the twins birth and childhood, and the aftermath of Paul's disappearance and is told from the viewpoints of several characters, primarily Clyde and Paul.

It is the writing that makes this novel engrossing, as there is not a lot of action. We find what happens to Paul and how Clyde, Joy, and Peter react to it, especially the choices that Clyde makes. I don't want to go into detail as to what happens and the devastating decision that is made so as not to give spoilers, but I will say that life in Trinidad, for this family is dangerous and difficult and Golden Child is not an easy read. Like A Place For Us, it made me melancholy (I'm wondering if SJP is becoming the new Oprah of somewhat sad and depressing  book club picks?), but it also made me think and I am still thinking about it. It's a book that is and will continue to get mixed reviews and provoke plenty of discussions at book clubs. It's a hard one to predict who will like it and who won't, but I'm glad I read it. I found Golden Child to be an excellent debut novel from a talented author and new voice that I look forward to reading more from.

Author Notes: Claire Adam was born and raised in Port of Spain, Trinidad and Tobago. She lives with her husband and two children in London, England. GOLDEN CHILD is her first novel.

There was quite a lot of emphasis on food in Golden Child, much of it Trinidadian dishes that along with the smaller neighboring island of Tabago, takes its roots and inspiration from Indian and South Asian, African, European, Chinese, Creole and Caribbean, and Latin American dishes and ingredients. (Here's a good wiki article on the cuisine.) Set in the eighties, and for the most part in a economically challenged community, the food is fairly basic with a lot of packaged food used and purchased by the characters in the story, or simple family dishes made at home. 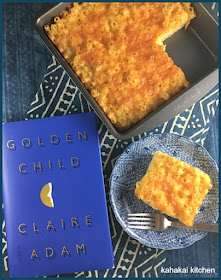 Seeing several mentions of macaroni pie in the book, I looked it up and found that it is considered classic Caribbean comfort food and that it is similar to a baked macaroni and cheese. When I realized I had everything I needed to make it with a couple of minor adjustments (ditalini pasta instead of elbow macaroni and powdered milk instead of evaporated), I knew it was going to be my book-inspired dish. There are plenty of recipes online, I riffed on Genius Kitchen's Macaroni Pie from Trinidad. My changes are in red below. 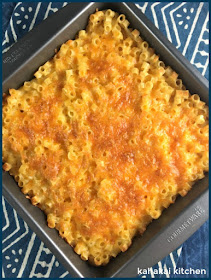 Cook pasta according to package instructions. Meanwhile, pre-heat oven to 350 degrees. Grease a baking dish (I used an 8" x 8")

Beat eggs until fluffy and combine them with mustard powder, then combine the macaroni, eggs, cheese, milk, and salt and pepper to taste.

Pour into the greased baking dish and bake until firm, about 30 minutes. (At about 5 minutes before it was done I sprinkled more cheddar cheese on the top and turned the broiler element on and broiled it for about 5 minutes until golden brown.) 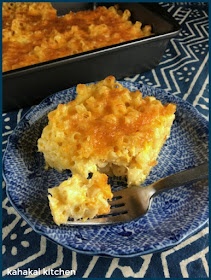 Notes/Results: Honestly, I have always been more of a stove top macaroni and cheese fan, liking the creamy consistency, but it turns out that I really like macaroni pie. The big difference is the fact that you don't have to melt down cheese and make a sauce, you just toss it all in a bowl and pour it into the pan. Super quick and easy. I liked the pop of flavor the added mustard power gave, along with the extra-sharp cheddar. I'd happily make it again. 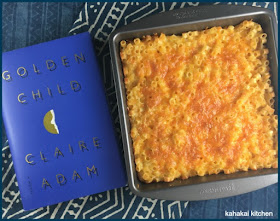 Note: A review copy of "Golden Child" was provided to me by the author and the publisher via TLC Book Tours. I was not compensated for this review and as always, my thoughts and opinions are my own.